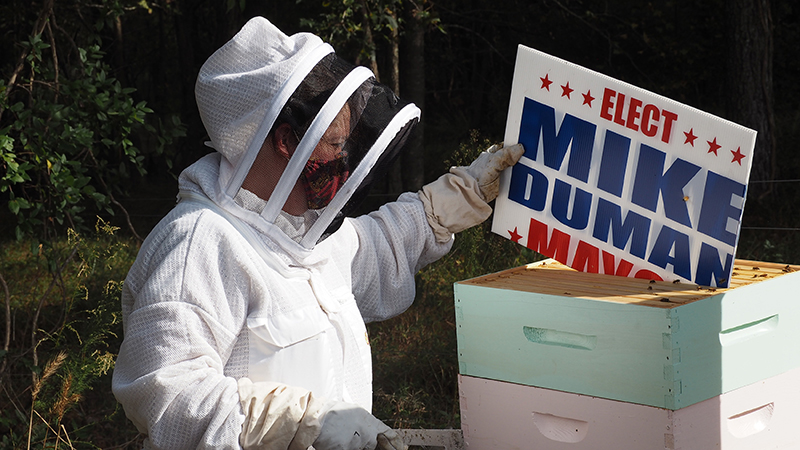 Mike Duman, who was elected the next mayor of Suffolk on Nov. 3, donated several of his campaign signs to Dr. Elizabeth Ward for use in her beehives. Here, she demonstrates how political signs, once trimmed, can be used to subdivide a hive.

Now that the Nov. 3 election is over, Dr. Elizabeth Ward is hoping her neighbors will donate their political yard signs to a far less divisive cause: beekeeping.

The signs are made of thick, weather-resistant cardboard, which, when trimmed down to fit beehives, can be used in a variety of ways to help honeybees survive the winter.

“About 30% of all hives fail in any given year,” said Ward, who maintains four hives on her family’s farm in Windsor. “There are several reasons for this, but a major factor are mites.”

The worst, she said, is called varroa destructor — a type of parasite that feeds off larvae and adult honeybees and can cause an entire colony to eventually collapse if left untreated. When treating for mites, some beekeepers place pieces of political signs beneath a screened base on the bottom of their hives to help catch debris and keep track of the mite load.

“The bees can be treated in many ways, everything from chemicals to powdered sugar,” Ward said. “When the mites fall off the bees, they go through the screen and hit the board … an accurate mite count is important to make sure the bees will survive the winter.”

The signs can also be used as traps for hive beetles — another pest that can affect a hive’s survival if counts are too high.

“The signs can be cut up and placed under the lid,” Ward said. “Apparently the bees chase them in there and then seal them in to kill them.”

She learned the technique from the Nansemond Beekeepers Association, a Chuckatuck-based group of which she’s a member. Pat Knight, another Nansemond Beekeepers member who runs a commercial apiary in Suffolk near the North Carolina border, adds a mixture to the grooves of her corrugated signs to give her bees a helping hand in ridding the hive of beetles.

“You can mix Crisco and boric acid and pack it into the void area,” Knight said.

The Crisco attracts the beetles. Then the boric acid kills them.

“Four to five [signs] will get you through a season,” Knight said. “We produce honey and honeybees for sale, so we have quite a few hives.”

The signs can also be used to make small hives — called nuclear hives or nucs when a hive is split and the bees are just getting established — or to block off parts of the hive from the bees, Ward said. They’re also useful as insulation under the main lid to help keep bees warm.

“The thick cardboard and relative weather resistance of the political sign make it useful for beekeepers because they are lightweight and sturdy,” Ward said.

“Beekeepers repurpose and recycle a lot of things in a lot of different ways,” added Steve Jones, another Nansemond beekeeper. He’s from Chesapeake but owns six apiaries, two in Suffolk and one in central Isle of Wight County.

To donate signs, Ward asks that they be dropped off at Serendipity Meadworks, 15981 Breezy Hill Lane, Smithfield.