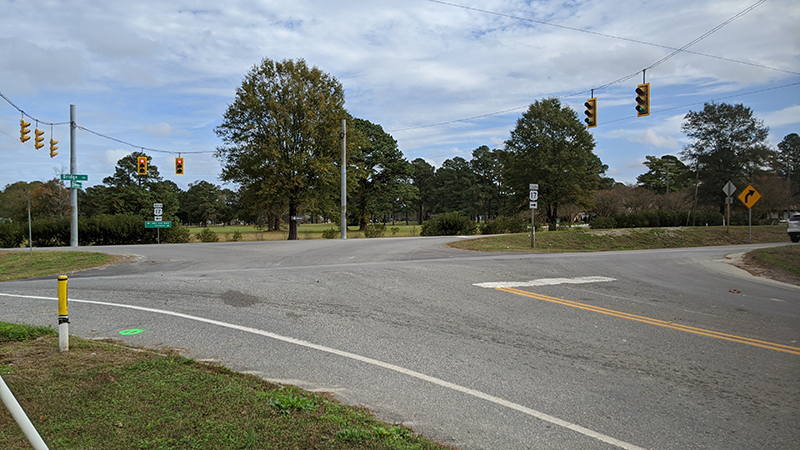 City Council gave its unanimous approval for the city to acquire property for the $8.9 million project to realign the Bridge Road and Crittenden Road intersection in North Suffolk.

Council gave the go-ahead for the city to acquire property — by either purchasing it or through permanent or temporary easements — for the $8.9 million project following a Nov. 18 public hearing.

Among the issues at the intersection is that the two sides of Bridge Road are on different elevations and cause problems for cars that can include scraping the pavement as they try to make the turn.

Public Works Director L.J. Hansen has said the project is about fixing a “non-functioning” intersection and making it a better one.

“It was what an old country road matched up to a U.S. highway, that’s what we had,” Hansen said. “It’s time that this road be improved to meet modern standards.”

Hansen said the way Crittenden Road currently meets up with Bridge Road is “not geometrically the best design.”

Crittenden Road’s traffic there would increase more than three-fold, to 10,000 vehicles per day in the next 20 years.

As part of the project, Crittenden Road will get a dedicated right-turn lane onto Bridge Road, which Hansen said would help with morning traffic flow. That, he said, would be a slip lane that would not require cars to stop.

Dual left-turn lanes would be put in on Bridge Road for traffic turning onto Crittenden Road, which Hansen said would help with evening traffic flow.

He said it is not because there is a huge influx of traffic, but by moving two cars at a time onto Crittenden Road, it allows more time for cars continuing on Bridge Road.

There would also be a right-turn lane put in for those turning from Bridge Road onto Crittenden Road.

The current intersection on Crittenden Road at Bridge Road would be closed, and it will end up with a hammerhead turnaround to allow for large vehicles such as buses and garbage trucks to turn around.

Also, a stormwater retention pond, storm drain facilities, curb and gutter, raised median, street lighting, sidewalks and other related items will be part of the project.

During the public hearing, Jeff Elmore, who lives in Cedar Point and is the president of its association, said its neighborhood has about 700 car trips for residents and about 200 to 300 additional car trips to Cedar Point Country Club during the summer months. He favors the intersection project.

“It does present a safety issue currently for residents … so I urge you to move forward with the project,” Elmore said.

Pat Merica of Eclipse Drive said she is concerned about the proposed stormwater pond to be installed as part of the project, specifically as it relates to silt drainage causing damage to that area of water as she said it had at the Chuckatuck Cove development.

“I’m very concerned that without proper oversight, the same thing could happen in the Sleepy Lake area,” Merica said. “I would just like to say that I hope that due diligence is followed as this project is undertaken. I think the road is actually a good idea, but care has to be taken for the environmental impacts, and I also hope that developers don’t use this new intersection to start pushing through developments like at the Bridgeport and all that Shoulders Hill Road mess that’s going to be very difficult to get through as things move on.”

Nearly $800,000 of the cost of the project will be for preliminary engineering, just over $2.2 million for right-of-way acquisition and more than $5.8 million for construction.

A combination of local, state and federal funding sources will be used to pay for the project. Hansen said there is enough funding for now to move forward with design work, right-of-way acquisition and utility relocation, but the city does not have the final funding needed due to Gov. Ralph Northam delaying the six-year improvement plan due to the coronavirus pandemic.

Though final funding is not in place, Hansen said it is fully funded, but it’s a matter of whether the city will have to wait until 2025 for federal funds or whether it will get that money in 2022 or 2023. He expressed cautious optimism in his comments to council that construction could begin by summer 2022.

“It looks very encouraging for us,” Hansen said. “I’d like to think that this is what’s going to happen, but until the (Commonwealth Transportation Board) makes their official action, which won’t happen until next month, I can’t guarantee that.”

He expects right-of-way acquisition to begin in December.

Once construction on the project begins, city officials estimate it will take about 18 months to finish.