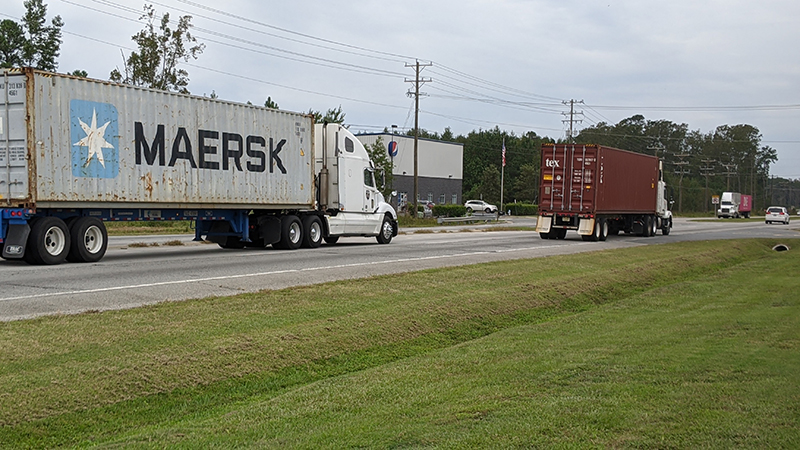 Suffolk City Council is set to adopt its 2021 legislative priorities at its Dec. 2 meeting. It is seeking continued support for additional transportation funding, with areas of concern including U.S. Routes 58 and 17, along with the Kings Highway Bridge.

Where is U.S. Route 58 on Suffolk’s 2021 legislative priority list?

That’s where the City Council’s discussion began on how it priorities transportation issues it wants General Assembly attention from.

Among the 2021 legislative priorities listed in a draft document for council to review were to “identify and begin pursuing a funding source for the replacement of the Kings Highway Bridge, as it is a vital crossing for the city and its residents.” It also includes, among them, a parallel bridge to the Godwin Bridge on U.S. Route 17 over the Nansemond River in North Suffolk.

The city’s priority list, a draft of which council reviewed Nov. 18, notes that the city is “in a position of transportation importance to the region, the Port of Virginia and the state,” and its location between the Nansemond River and the Great Dismal Swamp “create a convergence for five rail lines and five U.S. highways.”

Council is set to adopt its 2021 legislative priorities at its Dec. 2 meeting in advance of a General Assembly session that starts Jan. 13.

But before the discussion, there was nothing on Route 58, a key corridor in the southern part of the city.

Having expressed concerns for years, Councilman Tim Johnson asked why it couldn’t be included among the council’s priorities.

No one on council, including outgoing Mayor Linda T. Johnson, disagreed with the need for it to be a priority, but she did say that if the city’s priorities were not streamlined, that they could get lost in a legislative shuffle.

“It just boggles my mind that we don’t make 58 a priority on this,” Councilman Johnson said. “If anybody has driven 58, the intermodal park out on 58 is filled up, the tractor-trailer trucks are eating the road up, the ports are constantly expanding, 58 is a 1955, 1960 road that has had very few improvements since it’s been built, and it will not continue to stand the traffic. What I would like to see is that we start a process of asking the state to review what’s going on. This road won’t support what’s happening on it right now. And steadily over the last two years, it’s gotten progressively worse.”

The Holy Neck Borough councilman said the road is, and has to be, a priority now and without bringing it to the attention of state officials now, nothing will be done to improve it. Route 58, he said, is five times worse than it was five years ago when he began serving on council.

“For me to look at our priorities over here — the Godwin Bridge, railway, all these things, and 58’s not there, it’s mind boggling to me,” Councilman Johnson said, “because the road is in such dire need.”

Mayor Johnson, who has served on the regional Hampton Roads Transportation Advisory Commission since its inception in 2014, said the city has to be “real” with its priorities, but agreed with Councilman Johnson that 58 “is a real thing.”

“I do think, though, that when we start to put things in like the Kings Highway Bridge, which we all know is way down the picture, it’s so far out it’s not even there,” the mayor said. “The Godwin Bridge, we’ve been talking about that from the Hampton Roads area for a long time. That’s going to have to happen, because if you look at Route 17, it’s just like 58, it doesn’t just affect Suffolk. It affects Isle of Wight (County), it affects all of the region, 58 the same way. There’s been much discussion about the fact that 58 is going to become the way out of Hampton Roads. It’s going to become a preferred way out.”

The mayor, though, said the city can’t keep adding projects on its list of legislative priorities and have them all considered.

“We have to decide what is the number one, two, three, and maybe that’s it,” the mayor said. “Because we all know you’re not going to get but so much.”

Incoming mayor Mike Duman, the current Chuckatuck Borough councilman, agreed with having to prioritize projects and at that point, “set ‘em up, knock ‘em out one at a time.” He said Route 58 “is absolutely a concern,” but asked where the money comes from for it.

Interim City Manager Al Moor noted that including the Kings Highway Bridge as a legislative priority for 2021 was the result of council discussions last year.

Cost estimates on a new Kings Highway Bridge range from nearly $140 million to more than $204 million.

The mayor noted Route 58 has been discussed at various levels regionally, and those officials understand the need there, and that it should come ahead of the Kings Highway Bridge.

Councilman Johnson said Route 58 doesn’t need to be prioritized ahead of the Kings Highway Bridge, but it just needs to be on the agenda.

Public Works Director L.J. Hansen noted that the Virginia Department of Transportation has developed an arterial preservation plan for Route 58 from Emporia into Portsmouth, including Suffolk.

Councilman Roger Fawcett noted that with two Route 17-area projects upcoming — at Shoulders Hill Road and at Crittenden Road — it doesn’t just impact the city, but also Smithfield and Isle of Wight County going toward the James River. He said something has to be done somewhere, “because it’s getting to the point where you can’t move.”

Other council members were in agreement to add Route 58 to the list, and keep Route 17 there.

Vice Mayor Leroy Bennett suggested that the city work with the Port of Virginia to help fund Route 58 improvements. Mayor Johnson said the port is at the table with HRTAC and the Hampton Roads Transportation Planning Organization.

Hansen noted, as did the city’s legislative liaison, Rob Catron of Alcalde and Fay, that the state legislature does not appropriate money for transportation projects.

“I think it’s good for us to show where our priorities are and to identify where our priority projects are,” Hansen said. “The issue on the Kings Highway Bridge was never that it was our number one priority. But more, it was a matter of the legislative issue of, could we use State of Good Repair funds for that. And that’s what we sought relief from last year from the legislature.

“They never gave us an answer as to the availability of that funding because it got lost in the minutia about, well, what are you going to build, where’s it going to go, that type of thing, which is why we felt it was so important to do the study this year to try and give them an answer so that they could determine whether or not we would be eligible for that funding source.”

He said there is a smaller project on Route 58 and is awaiting word on whether it will receive SmartScale money for it. Councilman Johnson said that would be almost pointless.

“These little fixes, I’d just assume they not do that and put the money in fixing the frickin’ road,” Johnson said. “To get to Holland from Franklin, the road’s pretty darn good. And then from there to right up straight into the swamp where I am, it’s horrible. And we know it’s a problem. It’s got to be straightened, it’s got to be widened and it needs to be fixed. It’s not safe for the people that live out there.”