NR baseball standout to play Division I at Radford 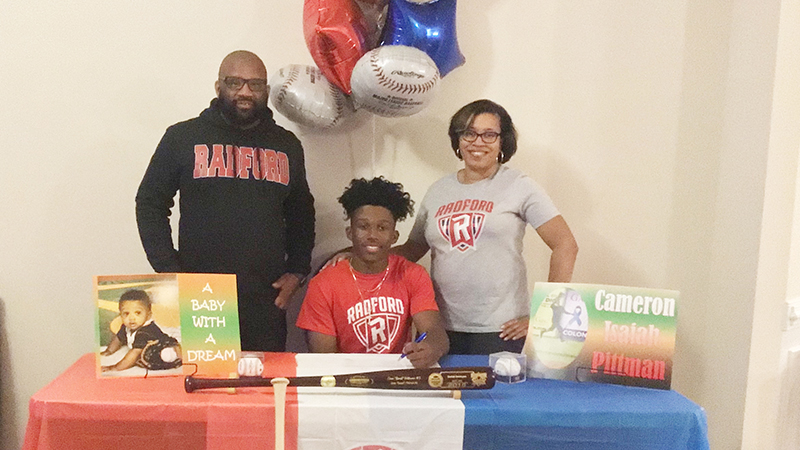 Nansemond River High School senior Cameron Pittman signed a letter of intent to play Division I baseball at Radford University. With Pittman, center, are his parents, Paul and Chanda Pittman.

Cameron Pittman and his Nansemond River High School baseball teammates had played two scrimmages in the spring when they learned their season would be canceled due to COVID-19.

Since then, without having his regular places to work out and in the midst of the recruiting process, Pittman and his father Paul put together a makeshift weight room and hitting net that has allowed him to stay in shape. His father noted the challenge his son has faced.

“Due to COVID, it’s been a challenging year for him with school being out and high school sports being on hold,” Paul Pittman said. “Nevertheless, he has made the most of his time by working out and using technology to stay connected to his recruiting process. My wife and I are proud of his accomplishments on the field and in the classroom.”

With his choices narrowed to a pair of Division I schools — Virginia Commonwealth University and Radford University — Pittman, 18, and an honors student at Nansemond River, chose Radford, where he will look to play in the outfield for a rising Division I program that went 9-8 in 2020 before its season was halted. In 2019, Radford was 30-27 overall and 19-8 in the Big South Conference.

“Really, the deciding factor was that they’ve been on me at a young age,” Pittman said. “They started recruiting me in ninth grade, and … they kept it straight with me from the jump. And I’ve been on the campus plenty of times. I just felt like it was a good fit for me from that standpoint. They have a pretty good baseball program and academic program.”

Pittman, along with his cousin Caleb, works out in the makeshift gym five days per week. Caleb transferred from Greenbrier Academy to Nansemond River for his senior season and played with Cameron before graduating and now plays baseball at Bryant & Stratton College.

Cameron Pittman has also gotten in some games in spite of the Warriors’ spring 2020 season being canceled. Besides the spring scrimmages, he has played with his Tidewater Orioles Scout team over the summer, and he has played this fall in an unaffiliated league for high school players, but he’s hopeful of being able to play this coming spring and get one last chance to play high school baseball.

Pittman, a lefty at the plate and in the outfield, is renowned for his speed, being named the 2021 Baseball Factory Under Armour fastest prospect in the nation.

In 2019 and 2020, he was named to the Baseball Factory preseason Under Armour All-American team, being ranked among the top 500 high school players in the U.S. by Perfect Game. He has been a two-year starter at Nansemond River and was set to be a starter again this past spring before the pandemic hit.

“I’m just a guy who wants to win,” Pittman said. “I’m going to do my all for the team to win, a guy that’s going to run the bases well, just going to try and get on it anytime, find a way to get on (base), a guy that has power, that can hit the gaps if need to. When I’m on the basepaths, I feel like I can run against anybody, because I’ve got a good burst of speed to be able to do that, and then in the outfield, patrol the field and make sure no balls drop in front of me.”

At Radford, Pittman hasn’t decided on his major, but he’s considering business management, physical therapy or pharmacy. But realizing a dream, even in a pandemic, has a lot of significance for Pittman.

“It means a lot,” Cameron Pittman said. “It’s been a lot of hard work I’ve put into it. I’ve been playing the game since I was about 7, so I’m someone who likes playing the game, going out of town, going to tournaments. My ultimate goal is to play D1 baseball and with this signing, it’s just another step to realizing I’m actually going to be a collegiate athlete next year at the D1 level.”