Flying a mission to help feed the world 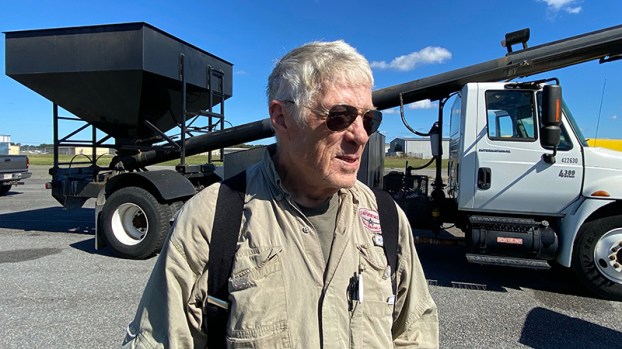 Justin Davis has been flying for more than 50 years. 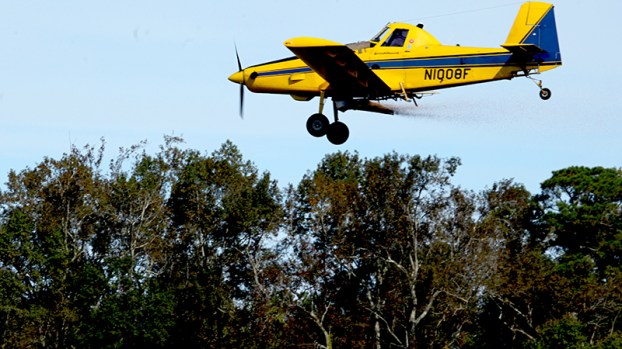 Agricultural pilot Justin Davis spreads a barely perceptible batch of seeds out of his plane on a recent venture.

Drive along a rural road in the early fall and you may see a small aircraft flying low, swooping and turning as it flies a gracefully controlled pattern over fields of mature cotton and soybeans.

No, it’s not a barnstorming crop duster out of early 1900s folklore, but rather an ag pilot flying a mission to help agriculture and the environment by sowing a cover crop. The pilot’s seemingly daredevil aerobatics aren’t just for show. Precise flying is critical in avoiding the hazards inherent to the job — power lines, taller structures and other low-flying aircraft such as helicopters.

While the north end of Suffolk is bristling with business and residential development, the southern end of the city remains rural with most of the city’s 60,000 acres of planted crops, according to Melanie Lassiter, county executive director of the Farm Service Agency. As cash crops are harvested on some of that acreage, cover crops grow up in their place. Cover crops, such as winter wheat, are planted primarily to prevent erosion, improve the soil, suppress weeds and control some diseases and pests.

Tara Williams, district manager of the Peanut Soil and Water Conservation District, explained that putting down a cover crop can qualify for a rebate for the farmer under the Virginia Agricultural BMP Cost-Share (VACS) Program that supports good conservation practices.

All of that is important Suffolk farmers, including Bennie Speight, who owns Greenway Farms.

“It’s a time thing,” Speight said. “You want a cover crop in the ground and growing by the time the winter rain, cold and snow comes in. If we had to wait until we finished harvesting cotton and soybeans, we would miss that timing and the cover crop also makes a nice mulch cover.”

Speight, whose farm includes 1,000 acres, used an aerial service for the first time last year after talking to some farming friends in North Carolina. Aerial sowing allows the seeds to be planted without disturbing the maturing cash crop.

Speight was familiar with the process because his father owned a crop-dusting service in Suffolk in the 1970s. In his teens, Speight loaded the planes and learned to fly. He doesn’t do crop dusting, however, so he hired Craft Air Services LLC from Hertford, N.C.

“Times have changed for the aerial crop services,” Speight said. “We used to drive along and spot fields with flags for the crop dusters, but now we send them a scan of our field maps from the Farm Service Agency.”

Justin Davis, who flies for Craft Air Services, has flown precision aerial applications for 48 years. Craig Craft, owner of the service, flies himself and considers Davis “one of the most experienced ag pilots in the industry.”

“Ag pilots are a specialty occupation,” Craft said. “We use only full-time ag pilots — no banner plane pilots or commercial airline pilots.”

On a recent sunny morning at the Suffolk Executive Airport, Davis, after making several passes over Speight’s Greenway Farms cotton fields, returned to the airport. He unfolded his lanky frame from the compact cockpit of a single-seater, turbo-powered Air Tractor #502. Painted Air Tractor’s trademark bright yellow, the plane can carry 300 pounds of seed, enough to sow about 30 acres of a cover crop — on this morning, winter wheat.

Davis climbed down from the plane to consult with his ground crewman, Matt Perry, who was waiting to refill the plane’s hopper. Perry explained how Davis relies on digital maps of the farm fields he will be working, an aviation-specific GPS and real-time weather radar to plot his course.

Through the course of his flying career, Davis has seen ag planes become bigger and more dependable with more powerful engines than the crop dusters that inspired his boyhood dream. When his family broke up, he dropped out of school and enlisted in the Navy at 17, serving as an airman, including a stint on the USS Coral Sea. When injuries cut short his Naval career not quite four years later, he went to flight school in Greeley, Colo., and went on to earn multiple aviation certifications.

Davis started flying as a crop duster and then, in the 1970s, flew for the U.S. State Department in its war on drugs, eradicating coca, opium and marijuana crops in South America. While that job might have carried more risks than flying as an ag pilot in the United States, Davis and other ag pilots face hazards daily.

During the busy season, which usually ends around early November, ag pilots work long days of frequent take-offs and landings, countless in-flight turns and maneuvers, and low altitude flight over fields bounded by power lines, trees, roads and structures. Davis crashed and burned once, 22 years ago, when he was flying a night run over a corn field in Georgia. An unexpectedly misplaced irrigation pivot forced him to choose between crashing into the metal arms of the pivot or pulling up into rows of power lines. He went with the former and lived but suffered a broken back and multiple other injuries.

In the following six months he rehabbed, learned to walk again and climbed back into a plane.

Davis agreed with Craft that one of the industry’s challenges is the number of people who have moved from urban areas into rural settings and are unaware of and intimidated by what the aerial application services do.

“We are well regulated and everything is EPA approved,” Craft said.

“I would tell residents unfamiliar with farming that when they see the ag planes overhead, relax and enjoy the air show — aerial services are safe, “ Speight added. ”All the years I’ve been around it, I still enjoy watching their precision flying.”