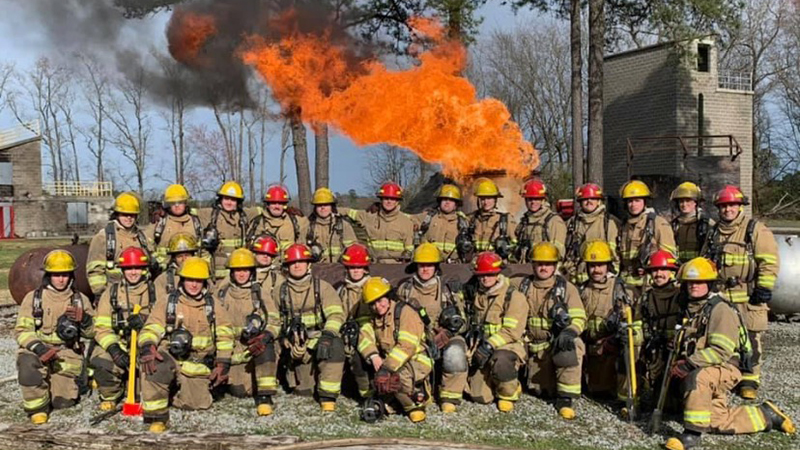 “You are no longer recruit firefighters,” said Fire Chief Michael Barakey said during the Nov. 19 ceremony. “You are firefighters. You are now in the rare company of being part of a profession that asks you to give of yourself above others. You will be asked to give of yourself so that others may live, because firefighters serve without hesitation and without judgment. To do this, you must be dedicated to the craft of firefighting. Dedication is what is important to your future in this noble profession.”

Barakey noted that the firefighters will “inject yourselves into situations that are not scripted, not easily mitigated and are highly dynamic. We will ask you to learn the art of critical decision-making as you continue to progress in your career.”

During the ceremony, they played a photo and video slideshow of Class 22’s training, and class president Casey Raynor, in a video, paid tribute to the class, and its instructors, for their efforts and dedication during the training process.

“You showed us the importance of accountability, not just for ourselves, but for our brothers and our sisters,” Raynor said. “You showed us that the smallest mistake or accident can be detrimental on a fire ground.”

Raynor offered his thanks to the group of Hot Shots that made up Class 22 and the year of training they underwent.

“Together, we have laughed, cried, sweat, bled, learned, lived and loved together,” Raynor said. “Most importantly of those, we learned. We learned how to turn almost any situation into the best situation we could, no matter what. We messed up, and we got strong. We did right, and we got rewarded. When we were down, we helped each other up, and when we wanted to give up on ourselves, we had each other’s back. We never let that happen.”

Retired firefighter Kenny Wilkins of the Portsmouth Fire, Rescue and Emergency Medical Services, in a video, recalled telling graduates when he first met them that the one thing they do not do is quit or waver in what they do while on the job while striving to be their best no matter the situation and be ready when they walk through the door.

“And I think that if you take the time now while you are young and you get the things out of the way that you need to, whether it’s classes, whether it’s learning your craft or whatever, you will do much better in the future because you’ll be able to find the balance and be able to make it right.”

Class 22 members from Suffolk include: