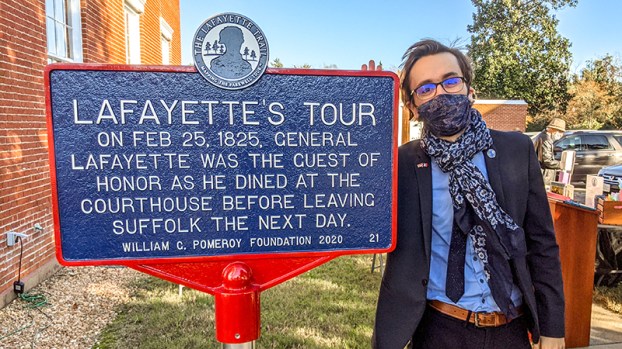 A historical marker honoring Marquis de Lafayette’s overnight stay in the city in 1825 was unveiled Dec. 3 at the Suffolk Visitors Center, site of the old Nansemond County Courthouse.

On short notice, the Marquis de Lafayette decided to visit Suffolk during his farewell tour of America, which had begun in 1824 and continued into 1825, when he stopped in the city.

The townspeople hosted a grand banquet on Feb. 25, 1825 at what was then the Nansemond County Courthouse, where the Suffolk Visitor Center now stands, and Lafayette stayed the night at The Castle Inn, a short distance from the courthouse before leaving the next day for North Carolina and other locations. His trip from Norfolk to Suffolk began his travels into southern areas of America before wrapping up his tour in Boston and heading back to France.

His stop at the courthouse was honored Dec. 3 with the unveiling of a historical marker at the visitor center, at 524 N. Main St.

The marker — in red, white and blue, the colors of both the United States and France — is a gift from The Lafayette Trail Inc. and the William G. Pomeroy Foundation and recognizes the city as an official stop along The Lafayette Trail, which highlights locations where Lafayette stopped during those two years and is the first one placed in Virginia.

“I think it’s great that we have the data for a marker like this,” said Julien Icher, founder and president of The Lafayette Trail, Inc., a Maryland non-profit which aims to increase mutual understanding between the people of France and the United States while highlighting Lafayette’s endeavors in the early United States.

“This is just one more step to remind people how great Suffolk is, and has been visited by amazing people in the past,” said city tourism manager Theresa Earles, “and of course, Lafayette was one of the most well-known visitors to Suffolk.”

Lafayette served in the Continental Army as a major general during the Revolutionary War. He helped pin down British Lt. Gen. Lord Cornwallis’ army at Yorktown, and after divisions led by George Washington and France’s Comte de Rochambeau surrounded the British and forced a surrender during the last major battle of the war. He was known as the “Hero of Two Worlds,” and was prominent as a statesman before he died on May 20, 1834.

Icher noted that Lafayette came to Suffolk on a Friday and did something that he didn’t do at many of his stops.

“Not all of them can claim that Lafayette spent the night, which he did here, actually,” Icher said.

Lafayette, having come from Norfolk to Suffolk, had been in the Washington, D.C., area and came south to Norfolk, and from there, went to Suffolk, where he stayed the night before heading to Somerton, also located in far southern present-day Suffolk — he was feted at the Washington Smith Ordinary there — and on to North Carolina on what Icher noted was Lafayette’s Southern Trip.

Lafayette came to Suffolk at the request of Suffolk’s then-congressman Thomas Newton Jr. six months after he arrived to the U.S. in 1824. At the time, Lafayette wasn’t able to give the city a specific date when he could come.

At 6 p.m. Feb. 24, 1825, Lafayette sent word that he would be in the city the following day, with local residents staying up all night decorating the banquet room of the courthouse and the Castle Inn. When Lafayette arrived, he was met with cheers from city residents.

Sue Woodward, a former teacher and former director of the Suffolk-Nansemond Historical Society, said most of the big events of the city during the time of Lafayette’s visit happened in the block around the former courthouse.

“Apparently, everybody carried the best of everything they could come up with to the inn,” Woodward said. “They carried furniture, china, glassware, silver, linens. He had the very best.”

She noted that a little over a decade after Lafayette’s visit, on June 3, 1837, “a fire destroyed this block, so none of those buildings where he actually visited, including the Castle Inn, are here downtown, but as I live in the 200 block of North Main Street, I’m happy to say there’s still some buildings in that direction he would have come past.”

Woodward said, at the time of Lafayette’s visit, the way into town from Portsmouth would have included going through what is now Driver, “where he stopped at a tavern for refreshment … then (went) to what we know as Nansemond Parkway and to what we know today as East Washington Street.”

“The militia met him at the head of Main Street, and all kinds of excited citizens fell in behind him, and he came this way with this big procession,” Woodward said.

Woodward hopes for another marker in Somerton at the Washington Smith Ordinary, presently located on Arthur Drive.

Icher noted that when Lafayette began his 13-month tour of the then-24 states of the United States in 1824, it was the year in which a divisive presidential election took place, with John Quincy Adams ultimately prevailing over Andrew Jackson, William Crawford and Henry Clay, and Lafayette had decided to visit with all four men.

Icher said he’s hopeful many people will see the marker in the city and learn more about his history in the city, and the country.

“Today, the legacy of Lafayette is one of a uniting message,” Icher said. “That’s what I’d like to emphasize with the Lafayette Trail, we can bring Americans together of different political views and political backgrounds or geographical diversity, whether you’re from French Louisiana, or French Maine, or New Hampshire or Tennessee and Kentucky, you can all have a part of Lafayette’s legacy.”

Wilroy Baptist brings back its panorama

A Suffolk Christmas attraction is getting ready to return for another year. Wilroy Baptist Church will host its annual three-night... read more