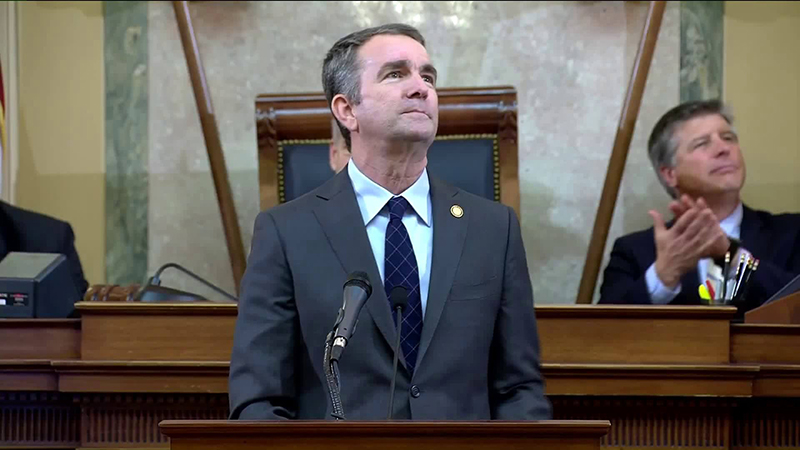 Gov. Ralph Northam announced a midnight to 5 a.m. curfew, a reduction in gatherings and an expanded mask mandate. File photo.

In an effort to curb a statewide COVID-19 surge, Gov. Ralph Northam on Thursday announced he would impose a modified stay-at-home order with a midnight to 5 a.m. curfew and further restrict gatherings to just 10 people beginning Dec. 14, as well as tighten the mask mandate.

The measures will remain in place until at least Jan. 31 unless rescinded or amended.

“We need to start with some hard realities,” Northam said at his Dec. 10 briefing. “The case numbers in Virginia are still better than most of the rest of the country, but they’re not good anywhere, even here in Virginia.”

Northam said unless people are commuting to and from work, they should stay at home from midnight to 5 a.m.

“If you don’t need to go out, go home,” Northam said. “This is just plain, common sense.”

When asked why he decided on a midnight to 5 a.m. curfew, Northam said he was “trying to follow the guidelines already in place and be consistent … and we’ve stopped the sale of alcohol at 10 p.m., restaurants close at midnight, and that’s why we’ve made it from midnight to 5 a.m.”

He also said spectators for recreational sports would be limited to 25 people per court or venue for indoor sports and two guests per player for outdoor sports.

“I know that watching your child play a sport that they love is an important experience … but I would encourage schools to consider creative ways of allowing spectators — streaming games online for example,” Northam said, “and they should also consider moving sports outside as they can. Just because basketball is typically played indoors doesn’t mean that it has to be.”

Northam said the state is also working on ways to get teachers vaccinated “because that’s an important step in getting schools back to an in-person learning environment.”

“We’re also working with education leaders on ways to help students catch up, because we know these few months have been very, very hard,” Northam said.

He also called on people to worship outside or online, rather than inside and in-person, and on faith leaders to set the example by voluntarily moving to virtual or outside services.

Northam noted that no health district is below 5% in its seven-day positivity rate for COVID-19, and the state’s positivity rate is 11%, which he noted has nearly doubled in the past month. He cited an 80% rise in hospitalizations over the past four weeks as reasoning behind his latest order.

“Hospitalizations in the ICU have been rising since early November and capacity is becoming a problem in southwest Virginia,” Northam said, “and could soon become an issue here in central Virginia. In most Virginia hospitals, the biggest problem right now is staffing. The nurses and doctors are literally exhausted.”

The seven-day rolling average for new cases in the Western Tidewater Health District — made up of Suffolk, Franklin, Isle of Wight County and Southampton County — is nearly 60 cases per day, by far the highest of the pandemic to date. There have been at least 50 cases for five of the past six days through Dec. 10, with a high of 87 on Dec. 6. The seven-day positivity rate in the district is 10.1%.

In the Eastern Region, the rolling seven-day average for daily cases is 593.6.

To stress the importance of his measures, Northam played a recorded video from Emily Egan, a registered nurse who works in a COVID-19 intensive care unit with Ballad Health in southwest Virginia, where cases have been higher than the rest of the state. She notes the toll the pandemic has had on people, but also on her and her family.

“I understand the importance of mental health, but the fight is getting out of hand,” she said. “It’s getting worse. It’s spreading. We’re losing more than we’re keeping,” she said, adding, “I’ve put an ungodly amount of people in body bags that I wasn’t prepared to do, but I wasn’t prepared to give up on a patient, but there was nothing else we could do, and we lost ‘em.”

She added, “if you could just stop one case by wearing a mask, or staying home, when you didn’t have to go out, it would help us so much. Just one case. If everybody did that, for one person, I think we could stop this.”

Northam, though, faced questions on whether a curfew when fewer people are out would be an effective means of tamping down the number of positive COVID-19 cases across the state, with more than 3,000 per day for the last five days, including a record 4,398 cases reported Dec. 9.

Gatherings, which had been limited to 25 people since his executive order announced Nov. 13, will now be limited to just 10 people.

“Cases went up, so we have taken that action,” Northam said.