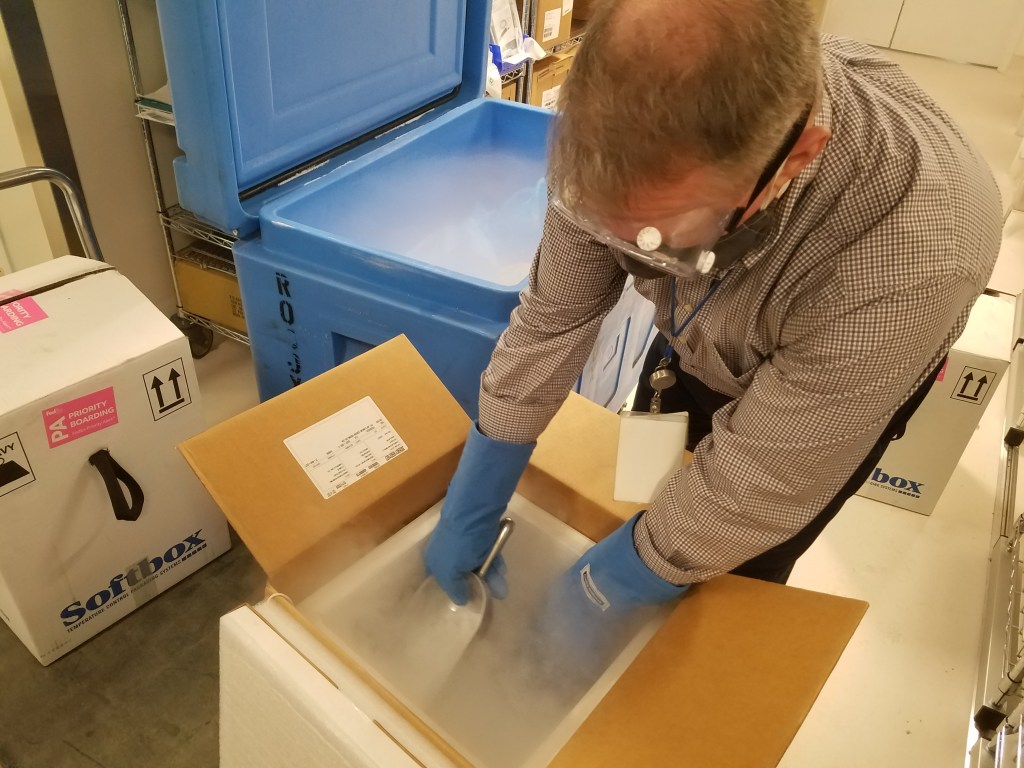 Sentara Healthcare has received its first shipment of the COVID-19 vaccine from Pfizer and will begin administering them Tuesday.

Sentara Norfolk General Hospital received 11,700 doses of the vaccine at 7:04 a.m. Monday via FedEx, according to its Chief Pharmacy Officer Tim Jennings.

Riverside Health System is set to receive 2,925 doses of the Pfizer vaccine later this week, but it did not receive any Monday, according to spokeswoman Savannah Lentz.

“We expect the arrival of the vaccine early this week and to begin vaccination of frontline healthcare workers by mid-to-late this week,” Lentz said.

The vaccine rollout comes as more than 300,000 people in the United States have died from COVID-19, including 4,414 in Virginia as of Dec. 13 and 167 in the Western Tidewater Health District, which has seen 6,129 positive COVID-19 cases and has a current seven-day positivity rate of 9.9%.

The Pfizer vaccine requires two doses to be administered 21 days apart. Sentara said it would receive an additional shipment with the second dose of the vaccine at a later date.

Tim Jennings, chief pharmacy officer for Sentara, said during a virtual briefing that shipments of the vaccine it has received have been sent out to its hospitals in the western and northern part of Virginia, and they will all be sent out by Wednesday.

“We are very, very excited,” Morin said about getting the vaccine. “It means that we get to start, hopefully, working towards that herd immunity, which will take time. … This is a significant opportunity.”

Both Sentara and Riverside have the ultra-cold storage capacity necessary for the Pfizer vaccine, which must be kept at a temperature of -94 degrees Fahrenheit.

Morin said it planned to vaccinate about 12,500 of its higher-risk staff, with 94% of them being able to get the vaccine from the initial shipment. After that, she said about 12,000 more employees would be getting the vaccine.

“There is an ample vaccine for all of those healthcare workers in both the larger buckets of Phase 1,” Morin said, “which are all of our people working in direct-care environments.”

Sentara is following Virginia Department of Health guidelines in distributing the vaccine and has prioritized staff members who will be among the first to receive the vaccine, including emergency department staff, intensive care units, COVID-patient units, respiratory unit staff and hospital staff who provide services in these areas.

“(Tuesday) we may start with vaccinating some of our employee health nurses who will be administering the vaccine so that we can do some trial runs on our process to ensure that it is safe and efficient,” Morin said. “Our plan is to start vaccinating on Wednesday.”

In a staff survey conducted about three weeks ago, about 80% to 85% of Sentara employees said they would be willing to take the vaccine, Morin said. At Riverside, an initial survey indicated that between 65% to 70% of its employees would get the vaccine or would likely get it pending further information.

“Herd immunity usually occurs when you’re over 60 to 75%,” Jennings said, “so if we get a good 80-plus percent of our health care employees, then we’re contributing very well to the overall immunization, and that’s what it is today. … This is the most efficacious vaccine that has ever come to market, and the subsequent Moderna one.”

Morin said that as the vaccine is rolled out to the wider population, it will work to establish trust with its safety and effectiveness. Some have concerns about the speed with which the vaccine has been tested and approved, and others, such as Black Americans, have a historical distrust of the government and vaccines due to previous harmful experiments.

“For those populations in which there have been a hesitancy to get vaccinated, we do have a team that focuses on those diverse populations,” Morin said, “and we will do like we did with COVID testing. We will target areas in which we know we have opportunity and … sharing as much information as we can when we get it.”

According to the federal government’s Operation Warp Speed, Virginia is to receive 72,150 initial doses from Pfizer, and an estimated total of 480,000 doses of vaccine from two manufacturers by the end of December.

Sentara and Riverside officials say the vaccine is voluntary, and employees are not required to take the vaccine, though they expect most to do so.

Morin said Sentara staff, even after receiving the vaccine, will continue to wear the proper PPE, including masks, and follow Sentara’s COVID-19 protocols.

The vaccine is currently not available to the general public and is not expected to be available until spring 2021.

“From a pharmacy perspective, I can say that it’s completely unprecedented to get a drug that quickly, and it truly is remarkable that something has come out this quickly,” Jennings said, “that it was able to be studied and developed.”