Board votes to rename Pioneer Elementary to Southwestern 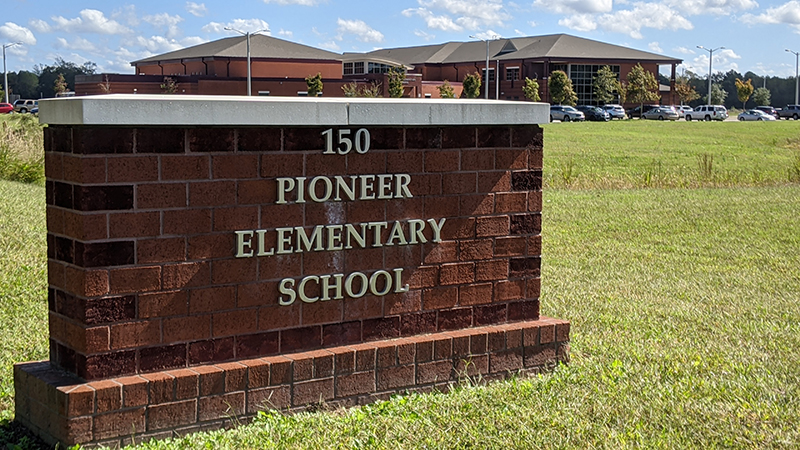 Pioneer Elementary School will soon have a name that's both new and old. The Suffolk School Board voted last week to rename the school after one of its predecessors, Southwestern Elementary School.

Pioneer Elementary School will have a new name — but a familiar one, to those in the Holland area of the city — after the Suffolk School Board voted in favor of changing it to Southwestern Elementary School.

The board voted 4-3 at its Dec. 10 meeting in favor of the change. Vice Chairwoman Dr. Judith Brooks-Buck, Lorita Mayo, Karen Jenkins and Tyron Riddick voted to rename the school Southwestern, while Chairwoman Phyllis Byrum, Sherri Story and David Mitnick voted against it.

The vote followed a public meeting about the name change — first proposed by Riddick — in which sentiment was mixed.

The mascot of the school, the Mustang, and its color scheme — purple and white — will remain.

The school opened in 2014 and began with students from the former Southwestern Elementary, as well as 16 from Booker T. Washington Elementary and 24 from Elephant’s Fork Elementary.

In June 2013, the board at the time voted 4-3 in favor of naming the school Pioneer Elementary. Then-board members Byrum, Linda Bouchard, then-chairman Michael Debranski and Diane Foster, voted in favor of the name Pioneer, while Brooks-Buck, Lorraine Skeeter and Enoch Copeland voting in favor naming the school Southwestern.

Education began on the site of the old Southwestern Elementary in 1924 when the Nansemond County Training School for Black students was built using money from Sears, Roebuck and Co. leader Julius Rosenwald, who put up seed money to pay for building schools for Black students in the rural South.

In 1956, a new building was constructed and the name was changed in 1964 to Southwestern High School. In 1970, the school graduated its last senior class and began housing grades four through seven, and then in 1979, it became a middle school, and in 1990, an elementary school.

Those who support the name change have wanted to recognize the role it played in educating Black students in southwestern Suffolk while remembering its educational roots. Others said it was the recommendation of an advisory committee at the time to name the school Southwestern Elementary.

The cost to change the name, including labor, painting, potential tile work and changing the marquee, is $44,700, according to division Director of Facilities and Planning Terry Napier. The division will use year-end money to cover the cost.

“This isn’t a major budget item for us to be able to do,” said Superintendent Dr. John B. Gordon III during the board’s Dec. 10 meeting.

However, Mayo, a former principal at the old Southwestern Elementary, and Brooks-Buck, said no one had expressed a desire to change the colors, only the name. Pioneer’s dominant color is purple, while the old Southwestern Elementary was red and white. Mayo said she didn’t recall anyone who spoke at the Nov. 9 public hearing mention the color scheme of the school, and noted that she hasn’t heard anything about changing the current mascot, the Mustangs.

“Is that necessary to change the colors,” Mayo asked. “I don’t recall hearing any conversation about changing the colors.”

Brooks-Buck said people wanted the name changed to Southwestern, and doubted they would be concerned about changing the color or the mascot.

“I think they just wanted a Southwestern school to recognize the fact that, what used to be the (Nansemond) Training School, was changed to Southwestern.”

The cost to change just the name on the building and the marquee sign? $3,700, Napier said.

However, Story said cost wasn’t the only concern, noting the school has had the Pioneer name since 2014.

Story said the name change is an emotional issue, and those not at the public hearing “feel just as passionate that it shouldn’t be changed.” She said there are other ways to honor the name Southwestern, such as putting in a sign or a historical park, and that it is the wrong precedent to set.

“This opens up the door to change any school name when a group comes and speaks before the board who’s got the ear of the board going forward,” Story said. “You’re opening up this idea of changing the name to change a name based on very good reasons, but still, this school was named Pioneer.”

Mitnick echoed Story’s comments, saying honoring Southwestern near the site where it once stood would be better “than to upend the name of a building that has stood for the last six years” and where students who have gone and are attending Pioneer have developed their own history.

Riddick said, however, that “we’re talking about a group of people who were slighted.”

“It’s just as if I would like to go to Suffolk High School and name it the original Thomas Jefferson High School that was built in 1911 versus the 1924 edifice at that location,” Riddick said, “so that is why the recommendation came forward. This is something that the residents of the Holland community have been adamant about for years.”