A drive in Holland to feed others in need 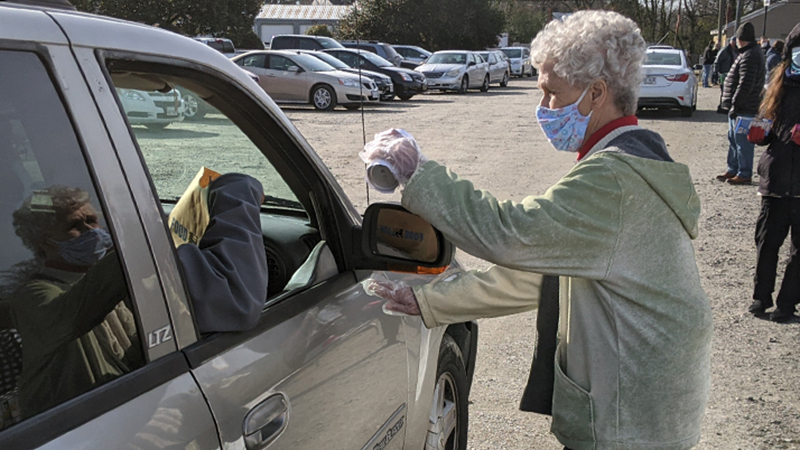 Lizzie Darden of Jordan’s Crossing church hands out food during the Holland Ministerial Alliance’s food giveaway Dec. 19 at Holland Ballpark. Churches from Suffolk, Franklin and Carrsville, along with the Holland Ruritan Club, took part in the event.

It wasn’t that Bryleigh Adams didn’t want to help. She did.

But for a shy 7-year old, sharing something so that others might eat was a challenge.

But with encouragement from her mother, Leslie Adams, Bryleigh handed out food during the Holland Ministerial Alliance’s food giveaway Dec. 19 at Holland Ballpark. It was a way for mom to be with her daughter and to “teach her and show her to give back to the community.”

They were there representing Western Branch Baptist Church, one of 14 churches in Suffolk, Franklin and Carrsville participating in the event. The Holland Ruritan Club also took part.

“It is heartwarming, and it is a blessing to be out here to be able to do this,” Leslie Adams said. “It’s just overwhelming. I’ve never been in those circumstances, but I would just hope that someone would be there for me if I needed it.”

Next to Adams and Western Branch Baptist was a lively group from Piney Grove Baptist  Church. The two churches put fellowship on display while handing out food to people in the cars passing through the parking lot at the ballpark — the liveliest one of all, perhaps, being Curtis Whitfield Sr.

“I enjoy it because you get to meet nice people and you get to help people out — and (there’s) laughs and jokes,” Whitfield said.

Josh Worrell, an associate pastor at Holland Baptist Church who helped coordinate the event, said it was unlike any he had seen in the village. He praised the churches for coming together to serve the community.

“They’ve all been very generous and very receptive to this, and showing that it’s not about each individual church,” Worrell said.

Worrell said he has noticed more of a need this year with more people out of work during the COVID-19 pandemic, either from being sick or from having their jobs cut. Knowing this, and the need in the community, Worrell hopes the churches can continue to unite to feed people in need.

“Hopefully, it’s something .. that we as church groups can start doing something twice a year, three times a year, something together and unify together to show the unified body,” Worrell said.

The alliance prepared 275 meals to distribute in the drive-through event and set aside 50 meals for those who, for health reasons, could not make it. By 8:30 a.m., a half-hour before the start of the giveaway, more than 50 cars were lined up.

Jim Lewis, pastor at Jordan’s Crossing, a new church off of Netherland Drive, said the event was a great way to network with other churches, get its name out there and minister.

Worrell hopes to provide similar events next year, and hopes the uniting of churches to help feed the community can spur them to come together in more ways.

“I hope this is just a start of something of the local churches in the area,” Worrell said, “just to continue to work together to shine brightly for Him.”