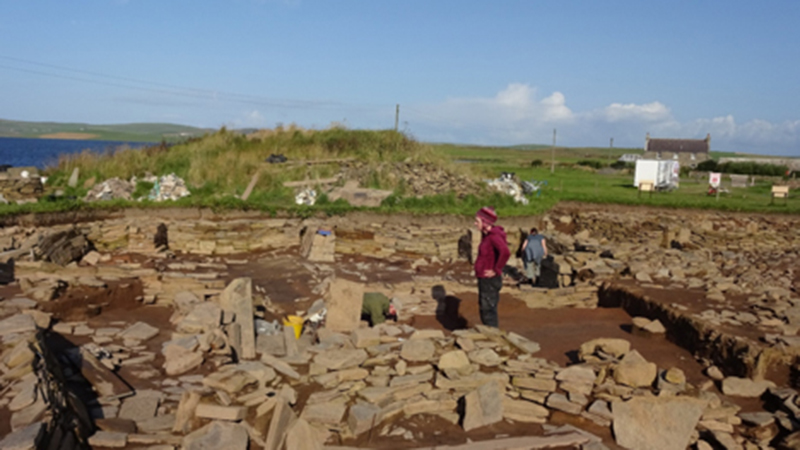 The Ness of Brodgar excavation site has been a focus of Suffolk resident Dr. Martha Johnson. (submitted photo)

Dr. Martha Johnson, a resident of Lake Prince Woods in Suffolk, is being recognized for her archeological work in Orkney, Scotland.

COVID-19 has not slowed Dr. Martha Johnson or her discoveries in the Ness of Brodgar in Orkney, Scotland. A resident of Lake Prince Woods for more than seven years, Johnson has been recognized for her work on archaeological excavations in Scotland and published a chapter of her findings in “The Ness of Brodgar: As it stands,” Her chapter, titled “The rocks that don’t belong,” aimed to identify the source of non-tool and non-structural rocks, termed “Foreign Stone,” recovered from the Ness of Brodgar excavation.

Archaeologists began excavating the site in March 2003, after a farmer’s plow exposed a stone slab dating back to the Neolithic period. Johnson traced the source of the “Foreign Stone” to other parts of the island and determined they served a decorative purpose as they were not intended for tools. Her discovery suggests established transport routes or even social networks on the island more than 5,000 years ago.

“My work at the Ness is to introduce aspects of geology and petrology to the existing archeology through the identification of the rocks recovered from the site, the 6,000 stone tools, and to assess, identify, and source the rock used to build the walls of the structures,” shared Johnson. The site is home to one of the largest Neolithic buildings known in Northern Europe.

Director of the excavation site, Nick Card, said “Johnson’s thesis is a brilliant piece of work that will have implications for work at any archaeological excavation.” Johnson has truly left her mark on the field of archeology and the community of Lake Prince Woods. She is a proof there is always more to learn and explore – even 5,000 years into the future.