An author reflects on her time in Suffolk 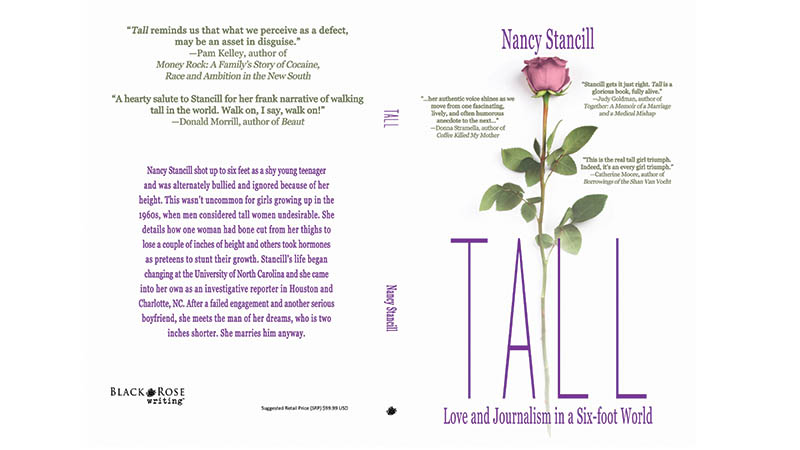 Nancy Stancil published a memoir, “Tall: Love and Journalism in a Six-Foot World,” that includes memories of visiting her parents in Suffolk and working with her dad, Godfrey Stancill, in the summers at the Suffolk News-Herald.

Nancy Stancill never lived in Suffolk, but she still considers it her second home.

In her new book, “Tall: Love and Journalism in a Six-Foot World,” Stancill looks back at her life’s ups and downs, including moments in Suffolk she spent with her parents.

“It’s a memoir that I thought about writing for a while,” she said. “I think people like memoirs. They are about life experiences and teach people about something they don’t know.”

Stancill grew up in the 1960s when being a tall girl was not a desirable feature, but she felt it helped her stand out in her journalism career. Her memoir looks back at her life, growing up in Radford and growing into her career as an investigative journalist.

When she was 20, her parents moved to Suffolk and became prominent members of the community. Her father, Godfrey Stancill, was the editor and publisher at the Suffolk News-Herald for many years. Her mother, Phyllis Stancill Pruden, was a teacher who, according to Nancy, knew everyone in Suffolk.

Stancill remembers spending her summers working as a reporter at Suffolk News-Herald. One of the chapters in her memoir reflects on the positive experiences she had learning from her father as she observed him at work.
“He was a really good role model and could do anything,” said Stancill. “He sold ads, wrote stories and the editorials and even delivered papers when people needed them.”

Stancill remembers her summers as a reporter at the Suffolk News-Herald and learning how a small city government works. She attributes this experience to helping her in her career in other newspapers in California, Texas and North Carolina.

After her father passed away in 1995, Stancill still came to Suffolk often to visit her mother before she passed in 2018. She recalls walking around her mother’s neighborhood of Riverview looking at the lights and old houses.

“I really love Suffolk,” said Stancill. “It is the neatest town.”

Stancill is also the author of two mystery novels in Texas, where she lived for 15 years, “Saving Texas” and “Winning Texas.”  The main character of these books is also an investigative reporter and follows stories that mirror the ones Stancill did while at the Houston Chronicle. However, according to Stancill, even though the two share similarities, Annie Price evolved into her own fictional person.

Stancil wrote this memoir in hopes of leaving a lasting legacy for those who want to follow in her footsteps.

“I really wanted to leave a legacy for my 3-year-old granddaughter and to help her get to know me,” she said. “I think that it’s important for the people who come after you to know what you did and thought about. It’s the reason for a memoir. It taught me a lot about what I have done in life. I was able to look back at my career as a journalist, and the personal parts, with enough distance, to evaluate it.”

Her book is available online at Amazon, Barnes and Noble, or her publisher’s site, Black Rose Writing.