‘A small little light at the end of the tunnel’: Vaccinations begin for city first responders 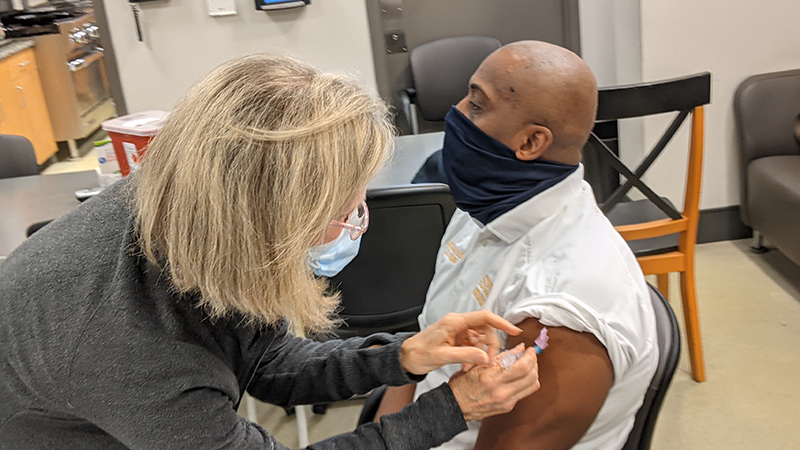 Demitri Wilson said it was not an easy decision to get the COVID-19 vaccine.

But after talking it over with his family, he decided to get it with them in mind, and the Suffolk Fire & Rescue battalion chief received his first dose of the Moderna vaccine Wednesday.

“You want to make sure that you’re doing the right thing, not only for you, but your family,” Wilson said.

Volunteers with the Virginia Medical Reserve Corps, part of the Virginia Department of Health, working out of the Western Tidewater Health District, administered the vaccine to emergency medical technicians and first responders on Wednesday. They did so again Thursday and plan more Friday, and will hold makeup days next week for those who weren’t able to get vaccinated. The health district serves Suffolk, Franklin, Isle of Wight County and Southampton County.

With a wife and two children, Wilson said, ultimately it was about doing something that could protect them and him from the coronavirus, even though with masks, gowns, eye coverings and gloves, he and the others in the department protect themselves as much as possible.

“It’s my family — I want to limit the risk of them getting it,” Wilson said. “Hopefully this vaccination will provide a barrier to lessen the risk to them, that I don’t bring it home to them.”

Fire Chief Michael Barakey said the department learned about three weeks ago that members of the department would have this opportunity to get the vaccine. Given the circumstances in which first responders operate — in often tight spaces and without the ability to social distance in carrying out their duties — he said it was important.

“Multiple COVID calls, and remember, everybody that we transport is in the back of a medic unit, that’s four foot by six foot, and then we do that repetitively over a 24-hour period, and repetitively over seven, eight months, so our opportunity to exposure is increased dramatically,” Barakey said, “and because of the confined space, we can’t social distance.”

And after dropping off the person, he noted they have to decontaminate the medic unit, turn around and do it again.

“The exposure rate for our firefighters is just dramatic,” Barakey said.

Medical Reserve Corps coordinator Connor Smith said the Centers for Disease Control and Prevention has done well in setting up software for the Virginia Department of Health to schedule vaccines at different locations. It allows for a scheduling process “about as easy as ordering a pizza,” he said, and has built-in reminders and scheduling.

“We have a lot of our MRC volunteers who have experience with flu, but this is COVID. It’s a different vaccine,” Smith said. “It’s been a learning process for us, but everything’s starting to really smooth out, and every experience so far has been a really great one.”

Smith said VDH has provided tools to push out training classes to volunteers, with most of it being online except for competencies for the vaccines. It uses the train.org application, with all of the vaccine classes in there. He praised their efforts getting up to speed and in administering the vaccinations after receiving the doses about two weeks ago.

“It’s been hitting the ground running ever since,” Smith said.

To date, it has vaccinated people at the Western Tidewater Community Services Board, and members of the local health departments.

He said they would be vaccinating health care providers in Franklin and Smithfield this week, along with continuing its vaccinations in Suffolk. And he said more volunteers would be welcome to help with vaccinations.

“We are just at the beginning of the pace,” Smith said. “It’s going to be a three-day-a-week, eight-hours-a-day, volunteer staff effort. If anybody’s interested in doing this and administering the vaccine, joining Western Tidewater MRC would be awesome, because we’re always going to need people.”

Smith said the next steps include administering vaccines as many days as possible, and possibly on weekends. For most of its events, the local health district will be using the MRC volunteers.

Smith said as the general public is able to get the vaccine, the goal will be for the health district to hold community vaccination events similar to the COVID-19 testing sites that have taken place previously across the region.

However, he said the nature of the vaccine is different given the ways the vaccine has to be stored and then used within a certain time period after removing it from cold storage, and the monitoring period that has to take place following the vaccine.

“That’s our intent,” Smith said, “but we’ve got a lot of preparing to do and a lot of planning and things have been so dynamic through this, that we’re taking it one tier at a time.”

Wilson said he did not experience discomfort in receiving the vaccine, but he understands those who are hesitant to receive it.

“I understand the hesitation,” Wilson said. “But I can speak for me. My biggest determining factor was just my family. It’s not bringing it back to them. The same holds true for the citizens of Suffolk, too, if I could get something that could also limit their exposure.”

In about four weeks, Wilson will return to get his second dose. It’s “a small little light at the end of the tunnel,” he said.