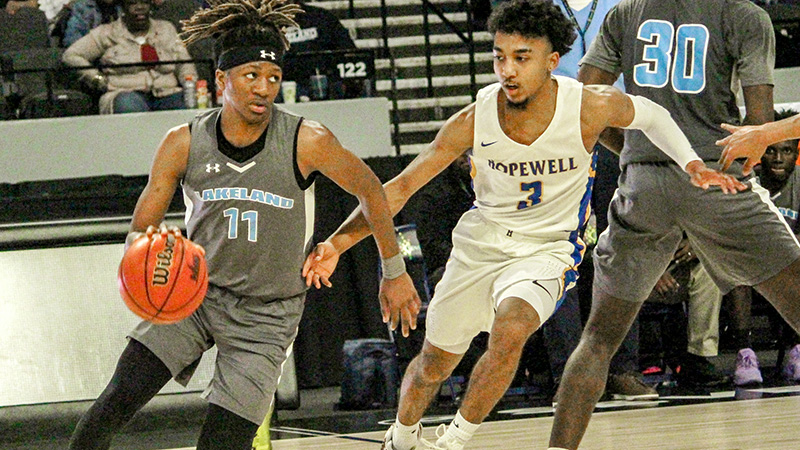 Lakeland High School's boys basketball team reached the state championship game but was unable to play after the playoffs were canceled due to the COVID-19 pandemic. Suffolk Public Schools Superintendent Dr. John B. Gordon III announced Jan. 14 that winter sports would be canceled. (File photo)

Suffolk Public Schools held out hope that it would be able to have a winter sports season.

However, with an increasing 7-day positivity rate for COVID-19 and cases per 100,000 for seven straight weeks, Superintendent Dr. John B. Gordon III announced Thursday that winter sports have been canceled for the city’s three high schools.

“It is with a heavy heart that this decision has to be made, but it is the right thing to do for our students and staff’s health and safety,” Gordon said in an announcement on the division’s website.

No decision has been made on the fall sports season.

“We will continue to monitor our health metrics to determine the safest path for our student-athletes to compete,” Gordon said.

“For seven consecutive weeks, there has been an increase in both the health metrics, including the 10% increase for the percent positivity rate in the last week,” Gordon said. “These health metrics have caused the division to reduce operational hours, modify staffing schedules, and on Dec. 11, 2020, suspend our participation in the winter sports season for the Virginia High School League.”

The division has been reviewing health metrics weekly since December to determine whether winter sports could be held.

The fall sports season was halted last March, which meant that both Lakeland and King’s Fork high schools’ boys basketball teams were declared co-state champions in their respective classifications. No public school in Suffolk has participated in any competitions since then.

Dr. Ron Leigh, Director of Secondary Leadership, briefed the School Board during its Jan. 14 meeting. He noted that the division had allowed virtual workouts, in which students could do conditioning workouts online with their coaches – in August, and extended that to in-person workouts Oct. 5 in groups of 10 or less without a ball and without running plays. Students were allowed to resume practicing in-person Dec. 7, but that was halted Dec. 18 due to rising COVID-19 metrics.

Leigh said that when students do begin playing again, they will be following safety protocols such as completing a safety monitoring form before every practice or game, disinfecting before, during and after activities, students on activity buses sitting one to a seat, wearing masks and not eating or drinking and no handshakes, high-fives or pregame or postgame handshakes.

“I think no one wanted athletics to continue more than Dr. Gordon and myself, who are former high school principals and coaches,” Leigh said. “But obviously the safety of our students was a primary (concern).”