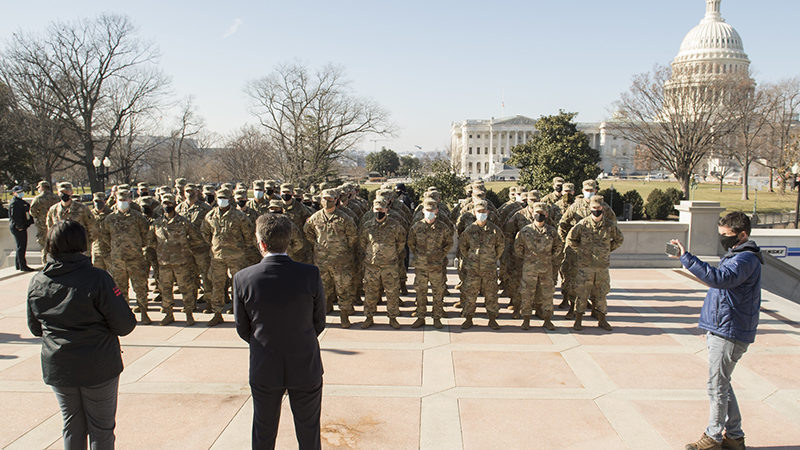 The Virginia National Guard has approximately 2,400 personnel on the ground in Washington, D.C., assisting civilian law enforcement in protecting property and providing a safe environment for citizens to exercise their right to peacefully assemble and protest leading up to the 59th Presidential Inauguration Jan. 20.

Among them are soldiers assigned to the Portsmouth-based 2nd Squadron, 183rd Cavalry Regiment, 116th Infantry Brigade Combat Team, which includes the troop in Suffolk.

“Mobilizing a large force of National Guard soldiers and airmen on short notice is always a challenge because our personnel have loved ones, jobs and schools they have to leave to come on duty,” said Maj. Gen. Timothy P. Williams, the adjutant general of Virginia. “Our leaders activated their alert rosters, the soldiers and airmen quickly answered the call to duty, and we had a huge effort from our staff to get them in-processed and up to Washington, D.C. We had everyone in place by Sunday evening and ready to go as requested. It was a tremendous team effort, and we couldn’t do it without the support of our families and employers. I am incredibly proud of how quickly and safely our personnel responded, and they have effectively integrated into supporting the civilian law enforcement security plan.”

According a news release published Jan. 14 by National Guard Bureau, Secretary of the Army Ryan D. McCarthy has authorized up to 21,000 National Guard personnel to support the 59th Presidential Inauguration in Washington, D.C.

“Right now, we have approximately 7,000 National Guard soldiers and airmen on the ground in support of the lead federal agency, and we are building to 21,000 for the upcoming inauguration,” Army Gen. Daniel Hokanson, chief of the National Guard Bureau, said during an inauguration security briefing with Vice President Mike Pence. “They are under the command and control of Maj. Gen. William Walker, the commanding general of the D.C. National Guard, and are providing security, communications, logistics and coordination with all supported agencies.”

The Virginia National Guard will have personnel on standby in Richmond over the weekend and available to respond if requested.

According to National Guard Bureau, military support to inaugurations by National Guard members dates back 232 years to when Gen. George Washington began his inaugural journey from Mount Vernon to New York City. Local militias, the modern-day National Guard, joined his inaugural procession as it passed through towns along the route to be joined by members of the regular Army, additional local militia, and Revolutionary War veterans once Washington arrived in New York City. This presidential military escort then accompanied him to Federal Hall for the presidential oath, and the National Guard and other military units have continued this tradition of inaugural support ever since.

As Virginia National Guard personnel are supporting the security effort in the nation’s capital, additional soldiers and airmen continue to support COVID-19 testing across the state and assisting the Virginia Department of Health with planning for administering COVID-19 vaccines.