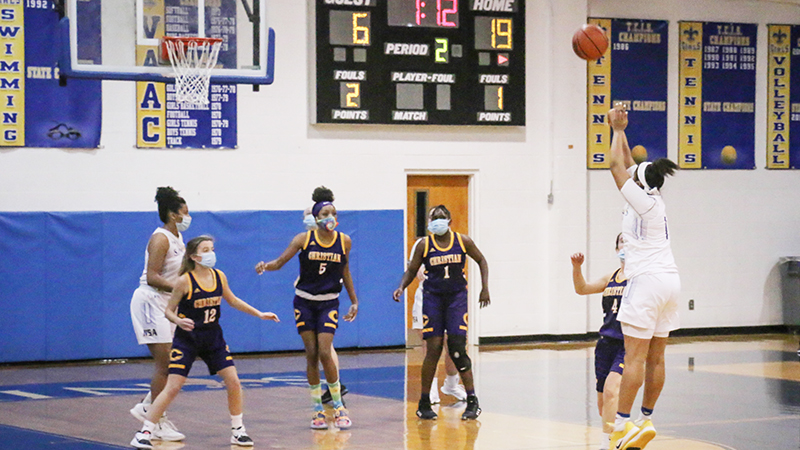 The Knights trailed by two, 9-7 after the first quarter, but led 17-14 at the half. Denbigh Christan cut the lead to two points at the end of the third quarter, but they held on for the victory.

In the loss, Cornette scored 18 points on 7-for-13 shooting and had nine steals, five rebounds and two assists. Though Patton had just four points, she added nine rebounds, four steals and three assists. Kennedy Oparaji had seven rebounds in the loss.

Nansemond-Suffolk Academy’s girls basketball team dropped a pair of games to Catholic, falling 59-34 in the first matchup Jan. 12 and 61-31 Jan. 15.

During the first of the two games against Catholic, NSA actually led 12-11 after the first quarter, but it was held to five points in each of the next two quarters as it was outscored 33-10, allowing the Crusaders to pull away.

In the second matchup, NSA trailed 23-7 after the first quarter and was down 41-15 at the half. The Saints played the Crusaders closer in the second half, only being outscored in the final two quarters 20-17.

The Nansemond-Suffolk Academy boys basketball team gave Catholic High School a good run in a pair of recent games, but dropped both to extend its losing streak to six games.

NSA cut the lead to six points after the third quarter, but it wasn’t able to fully close the gap.

The Saints, who were 14-for-38 from the field, made eight 3-pointers. Grant Lopez, who led them in scoring with 13 points, had three of them. Isaiah Fuhrmann had eight points on 3-for-5 shooting while Riley DeCandido and Kemauri Spencer each had seven points, with DeCandido adding five rebounds.
“We got a lot of good shots, but our margin for error is just very small with what we have for our roster,” said NSA coach Chris Fuhrmann. “We just don’t have a dominant big guy this year. We don’t have the guard play that we had the last couple of years with (George) Pettaway and Kaleb Brown to where, if stuff gets a little hectic, those guys were so talented they were able to create something for themselves or somebody else. We have to do a whole lot now together and really execute, and we’ve been doing a much better job at that.”

In the second matchup against Catholic Jan. 15 on Senior Night — parents of the seniors were allowed to attend — NSA was tied at the half and trailed by three after three quarters before falling 41-35.

Brady Canfield led the Saints with 13 points and 10 rebounds, while Spencer had 12 points on 4-for-5 shooting. Isaiah Fuhrmann added seven points, going a perfect 3-for-3 from the field.

NSA’s boys came even closer to picking up a win Jan. 7 against Peninsula Catholic, losing 53-52. The Saints had a chance for a dramatic win, but the inbounds pass to an open player with just two seconds on the clock clanged off the rim as time expired.

“I was really pleased with our effort,” Chris Fuhrmann said of the loss to Peninsula Catholic. “Peninsula Catholic, they’ve been playing a whole lot more than we have. Even over the summer, they did a lot of things that we weren’t able to do.”

The Saints have had to play since Jan. 5 without Jaden Freeman, who injured an ankle in the second matchup against Cape Henry Collegiate and is out for the season.

Chris Fuhrmann said Lopez, at guard, and Spencer, as a forward, have been big contributors to the teams this season.

Lopez, at 5-foot-9-inches, is expected to play at Division III Randolph College next year, though his coach didn’t necessarily see it early on in his high school career, but he cites the player’s work ethic and notes that he has to go up against every team’s best player.

“We’re really excited and proud of him for that, and he’s worked extremely hard these last two years to get himself in the position he is,” Chris Fuhrmann said. “When I first came over, if you had told me that he’d be able to go and play on a Division III roster, or get on a Division III roster, I probably would have been like, ‘Yeah, I don’t really see it.’ But he has really worked extremely hard. He’s a very, very good shooter.”

Spencer, according to his coach, is the “ultimate workhorse” and does anything asked of him.

“He’s typically our leading rebounder,” Chris Fuhrmann said, “and this year, he’s had to expand in scoring a little bit. He’s now the first or second option. He’s had to get used to that because he’s a very selfless player. He was passing the ball, getting other people involved, so to try to tell him you have to score now is a little bit against his nature because of how he is and how he plays, and being that guy that does all the dirty work and who still ends up getting his.”

NSA has been helped by two transfers, the 6-foot-5-inch Canfield from California, and then the coach’s cousin, freshman Isaiah Fuhrmann.

But Chris Fuhrmann said it has been DeCandido, who is a verbal commit to the University of Maryland for baseball, who has had to make the biggest adjustment this season in having to start at point guard. As a freshman, he played as an off-guard and did not have any big responsibility, but he has shown improvement as the season has progressed.

Meanwhile, SCA’s boys basketball team got off to a slow start in its 52-25 loss Jan. 15 to Franklin’s Rock Church, as the Knights were outscored 20-2 in the first quarter. It followed a 69-30 loss to Bethel Assembly Christian Academy.

Knights coach DJ Daniels said this season has been a growing experience for his team. He stresses the importance of learning from what they do wrong while also focusing on what they have been able to accomplish.

“We’ve had about two or three games where I felt like we weren’t really in it,” Daniels said.
“We’ve played a few teams that had mostly seniors, way bigger, way better and stronger than us. And we still tried our best to work on certain things … but we’ve had a couple of games that we had competitive moments and we put it all together.”

SCA is playing in a new conference this season — the North Carolina Christian Athletic Association — that Daniels said gives the school a better opportunity to compete than its previous one, the Hampton Roads Athletic Conference. NCCAA schools include North Carolina schools Victory Christian and New Life Academy in Elizabeth City, Bethel Assembly in Windsor, Ahoskie Christian Academy and Trinity Christian School in Greenville.

Daniels said sophomore forward Joshua Peacock has been growing as a player and has potential “through the roof” and freshman Isaac Smith, at shooting guard, has shown “a lot of improvement” and could be a force before he’s done playing. Another freshman, Landon Patton, has been playing point guard and has been showing good ball-handling skills.

The Knights (0-9) are to play Ahoskie Christian Academy Jan. 19 and play at TEACH Basketball of Virginia Beach Jan. 22.

“It’s been a tough season,” Daniels said. “We have one senior on the roster and one junior on the roster, so it was going to be a rough season in terms of the won and loss record. But I can’t stress enough how thankful we all are that we can get a season in and we’re starting to grow as a team. … We may be taking our lumps this year and next year, but as those guys start to age, we’ll really start to have some gelling and have a pretty experienced team on the varsity level.”