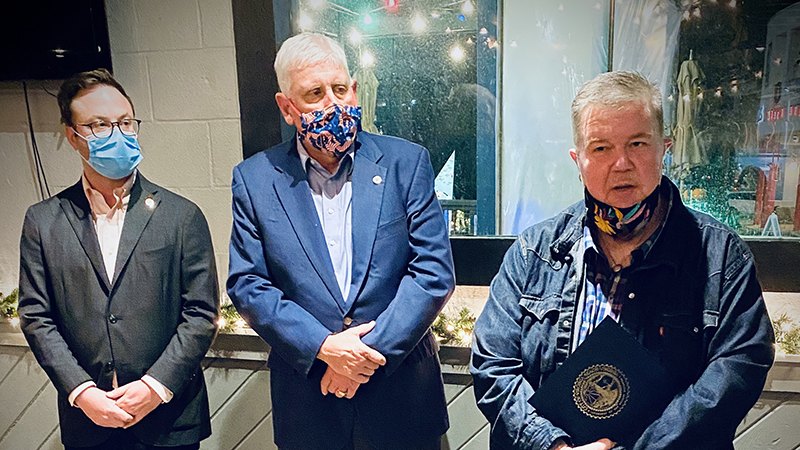 Patrick Evans-Hylton received recognition recently for 25 years of work in the Tidewater region as a food journalist. He is currently living in Virginia Beach but has contributed all over the region.

In a small ceremony at Croc’s 19th Street Bistro in December, Virginia Beach Mayor Bobby Dyer and Virginia Beach Councilmember Michael Berlucch recognized Evans-Hylton for his years of contribution to the region.

“I received a certificate of recognition for a quarter of a century of different works in food journalism,” said Evans-Hylton.

Evans-Hylton is originally from Atlanta and started his career in the banking and financial field. He always loved cooking and is a big Martha Stewart fan. He decided to switch careers and entered the culinary program at Johnson and Wales University.

After moving to a small farm in Whaleyville with his partner, Evans-Hylton would regularly read the Suffolk News-Herald and realized there was no local food column.

“I live by the motto, ‘You’re not going to get it unless you ask,’” said Evans-Hylton. “I was told that I wouldn’t be paid, but I could still do it. My first column ran in December of ’95.”

Eventually, he was hired as a reporter but continued the food column and honed his writing skills. From there, he spent years working as the food writer for The Virginian-Pilot, the food and wine senior editor at Coastal Virginia Magazine, the executive editor of Virginia Wine Lover magazine, making weekly appearances on WNIS radio and much more.

Evans-Hylton is now working on his 11th book, “Virginia Distilled: Four Hundred Years of Drinking in the Old Dominion.” Some of his works focus on the historical impact of Hampton Roads, including his books about aviation and World War II. Most are food-related, including his book on Suffolk Peanut Fest, Smithfield ham and local recipe books. He has appeared on the Martha Stewart radio show nine times to talk about his book “Popcorn.”

As a food historian, Evans-Hylton collects food artifacts. He has more than 30,000 artifacts dating back to the 1500s. These are artifacts based on food and drink in Virginia history. One of his latest finds was a hatchet pin from Carrie Amelia Nation, as she toured the state speaking out against alcohol. The hatchet represented the famous one she would use to break up saloons across the country in the 1900s.

“I started collecting right at the start of the Internet before there was eBay,” said Evans-Hylton. “I got the majority of mine from going to auction houses and yard sales. I did get a few online, but most of the time, people find things, and they ask me if I would want to buy them.”

Evans-Hylton loves that he can learn and share the history of American cuisine as it started here in Virginia. He also loves that his recipes can serve in a way to bring people together as food tends to do.

“Food is a good way to be a unifier,” he said. “People break bread together and understand where each other comes from. I love that I am able to facilitate that through my work.”