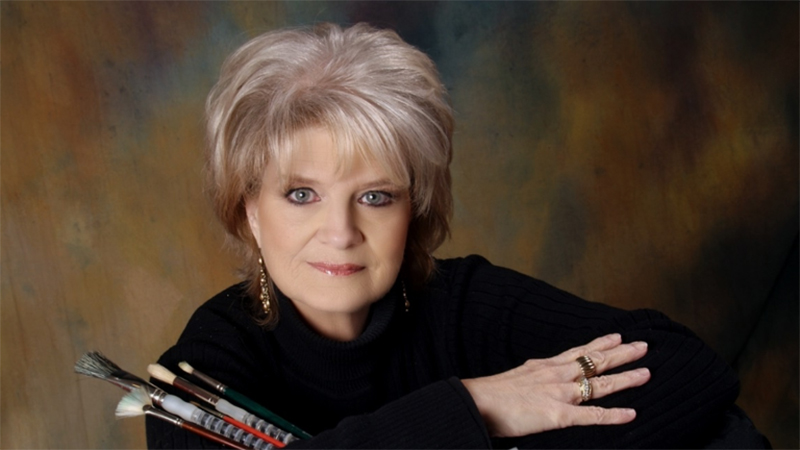 Penny Duke of Isle of Wight County, also known professionally as Topaz, is the featured artist and honorary chairwoman of Nansemond-Suffolk Academy’s 35th Annual Art Show and Sale, which is being held virtually this year at nsaartshow.com. Duke has 64 works featured in this year’s virtual show. (submitted photo)

The Nansemond-Suffolk Academy’s 35th Annual Art Show and Sale is still on this year, but due to COVID-19, it is taking place virtually.

The show, which serves as a fundraiser for the school’s arts programs, features more than 130 artists. It began Jan. 23 and continues through Jan. 31 and can be found at nsaartshow.com. The show’s featured artist and honorary chairwoman is Isle of Wight County native Penny Duke — known professionally as Topaz. Duke has 64 works featured in this year’s virtual show.

“I’m very honored to be the featured artist,” Duke said. “Of course, when we first spoke, we had no idea that it would be virtual. I’m a real people person, so as you can imagine, not to be able to interact with the patrons as they come to the show has been disappointing for me, but the ladies in charge have done an awesome job, and I’m sure that the public will be able to see all of the paintings that they normally would see hanging.”

Melissa Hlinovsky, NSA’s assistant director for advancement, said the show features artwork for myriad tastes, including flat art with acrylics, watercolors, mixed media and oils, as well as multimedia art such as pottery, jewelry, glass and sculptures. Prices range from $10 to about $4,000. The art listings also include the dimensions for each piece to help potential buyers size it for the spaces in which they might want to display it.

“I always say there’s a little something for everyone, and there still is,” Hlinovsky said.

Normally, in a regular show, the artist’s works are grouped together, and in the virtual format, that will not change.

“Whereas in the past the artist would bring their art here (to NSA), and we would display it for 10 days in the halls, and the community was welcome to come to the show, we’re not able to do that due to COVID,” said Kenda Council, NSA’s director of advancement.

Each artist had to take multiple photos of their art, and then it was uploaded to the website.

On the website, the artists have been sorted into collections in alphabetical order by last name. Each piece of art on the website features several photos, the name of the work, the price, and what type of art it is, as well as information about the artist. Those interested in buying a work of art can put it in their cart — much like regular shopping online — or they can click the “buy it now” button. If an item has been sold, it will be noted as such, but it will still be viewable. It is also shareable on social media.

When people access the website, they will find a message from Debbie Russell, NSA’s head of school, as well as one from presenting sponsor Farmers Bank.

“It’s just a different process, but we’ve had to make it work within the new guidelines,” Council said. “It’s taken a little creativity. We’ve had to really reimagine this show.”

Council credited Hlinovsky and co-chairwomen Mary Kemple Henderson and Camille Harrell with pulling the virtual show together. There was never a question of not holding an art show, and she is confident of the show’s success. Going into the show, Council is hopeful of the show being profitable. Past shows have raised $40,000 to $50,000.

Council said the show is also important as a way to support artists who have not had the ability to sell their art for the past few months.

“It’s our 35th year of this show and our artists have been so faithful to us through the years,” Council said, “and we felt like it was incumbent on us to deliver a show for them to be able to sell their works as well as to help support our arts community here at school.”

Artwork pick-up: All purchasers will schedule a time to pick up their artwork from NSA’s main campus the week of Feb. 15. Pick up times will be scheduled after the close of the show.