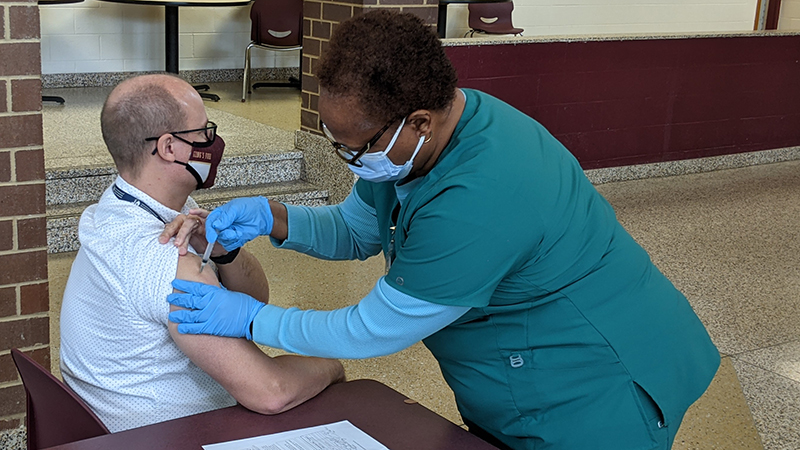 For King’s Fork High School biology teacher Dwight Buchholz, there was never a question about whether he would get the COVID-19 vaccine.

So when Suffolk Public Schools and the Western Tidewater Health District put together a two-day, closed-pod vaccination event for the division’s staff at the school earlier this week, he was all-in.

“I’m a biology teacher, so the mechanics of this, the way that it’s working on a cellular level, there’s really nothing to be concerned about or worried about,” Buchholz said after receiving the first of two doses of the Moderna COVID-19 vaccine Jan. 26.

He was one of nearly 1,000 people in Phase 1B of the state’s vaccination program who got their first doses of the vaccine — exactly 500 of whom were vaccinated on Jan. 25, and another 494 the following day, along with a pair of Medical Reserve Corps volunteers who are receiving their second dose.

Buchholz said for those on the fence about getting the vaccine, it is safe and will help.

“The rumors that are out there about the ways that it can be difficult to cause you problems are just not true,” Buchholz said. “It’s made using a biological process in your body that literally is meant to disintegrate what it actually creates in your body. It’s completely harmless, but is perfect for identifying the virus and then sending the white blood cells after it to destroy it.”

MRC coordinator Connor Smith said the event went smoothly and there were no wasted doses. Smith said two health department nurses and 10 volunteers each day staffed the event, and school division nurses entered vaccination information into the state database. He and most of the volunteers have worked about a dozen or more vaccination clinics since the vaccines came online.

“We are capable of giving more than what we’re receiving right now,” Smith said. “We are small but mighty.”

Smith said they added more than 15 new volunteers this month and are growing consistently. Since last January, the district has added about 100 volunteers, giving it about 275 total.

He said every hour slot for vaccination appointments had between 90 and 100 people scheduled, and the vaccinations for each hour were done in about 20 to 30 minutes.

For those getting the vaccine, SPS staff entered the cafeteria through a side entrance, checked in and then waited in line to go to one of seven vaccination stations set up on one side of the cafeteria.

After receiving the vaccine, they then went to the other side of the cafeteria to wait for the required 15 minutes to ensure there were no immediate reactions to it before being able to leave.

Smith and district emergency manager Will Drewery said over the two days, no one waited in line for more than 15 minutes.

This week, including first and second doses, the health district would be administering about 3,000 vaccines between each locality in the district, and six additional open- and closed-pod events.

That total is expected to decrease next week, with Drewery noting earlier in the week that it had just 900 doses available, though that could increase with Gov. Ralph Northam’s announcement at his Jan. 27 COVID-19 briefing that the state would see a 16% increase in its vaccine supply.

“We’re definitely looking to put our foot on the gas,” Smith said.

He said the district takes responsibility for the lack of information about COVID-19, and specifically, about the vaccine, on its website. Smith has begun updating the website in addition to his other duties. It now includes the current phase it is in, and notes that appointments for those in Phase 1B are currently full until Feb. 8. It asks that people in this phase wanting to get a vaccine appointment not call their respective health department until Feb. 4.

Northam has also pledged that the Virginia Department of Health would set up a single, statewide vaccination registration platform that will connect to a phone number and website. He said the state would also hire more people to staff the phones.

And while the health district is staffing phones at its health departments, Smith asks for patience as its small staff works through the calls.

For College and Career Academy at Pruden Dean of Students Dr. Tonya Spruill, said she thought for a few minutes about getting the vaccine because it was new, but after doing her research, she was comfortable with getting the vaccine. Spruill said she appreciated the school division working with the health department to hold its own vaccination event for staff.

“I think this is awesome to have this for faculty and staff,” Spruill said. “This is just awesome. What else can I say?”

Buchholz, like Spruill, appreciated the school division and the health district for putting on the vaccination event.

“It fits in with the overall plan of what all of us want to do, which is to get kids back here as soon as it’s safe to do so, as soon as their grandparents won’t be in danger from them coming,  Buchholz said, “and anything they can do to expedite that process is great, so that’s why this works really well.”