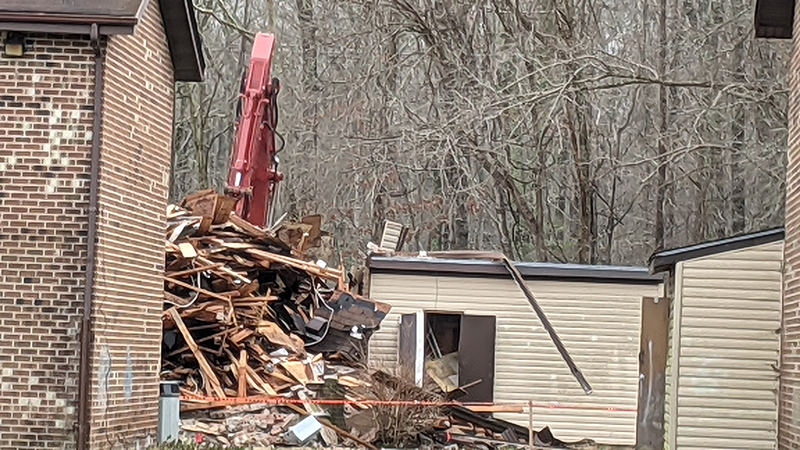 Demolition of the old Parker Riddick apartments was under way this week.

On one side of Davis Boulevard, work has been underway to rehabilitate the former Cypress Manor Apartments.

On the other, the demolition of the former Parker Riddick Apartments has just begun.

Combined, the two public housing communities, which were built in the 1970s as market-rate housing, will form the new community of White Marsh Pointe at Eagle Landing, which will begin taking shape this March when the 113 former Cypress Manor units are expected to be ready to be reoccupied and will be called Eagle Landing.

The other 93 units, since they are being rebuilt, will take a bit longer, as those are to be ready in 2023, with those in the former Parker Riddick community to be known as White Marsh Pointe.

All of it is being converted to what was once known as Section 8 housing — now called the Housing Choice Voucher Program.

A formal groundbreaking for the project is expected to take place once the demolition of the former Parker Riddick units is complete and when it is warmer outside.

“I am so excited that we are finally moving the needle on this project, today seeing those buildings coming down was quite amazing,” said Suffolk Redevelopment and Housing Authority Executive Director Tracey Snipes during the Jan. 26 board of commissioners meeting, crediting the board and the authority staff with making a difference for families. “It seems like a long time coming.”

The $46.3 million project has been structured as a low-interest tax community and is being financed by a mix of tax credits, a Suffolk Redevelopment and Housing Authority loan, $275,000 from the city and $1 million in grants from the Federal Home Loan Bank of Atlanta. The federal Housing and Urban Development endorsed the Federal Housing Administration-issued $23.1 million mortgage on the project.

The former Parker Riddick residents received housing choice vouchers to use for other housing while the work is ongoing. Their units, which now have fencing around them, had been undergoing asbestos abatement.

“We are so glad to finally see the progress of this project,” said Quinton Franklin, chairman of the housing authority’s board of commissioners. “We have been at this for quite some time. This makes my fourth year on the board, and we started on this when I came on the board.”

At Cypress Manor, residents have been shifted to other units on that side since that work is being done in phases.

While the brick frames of those units are remaining intact, there is still asbestos abatement being done there too and will conform to state and federal requirements, according to Peter Behringer, a managing member of TCG Development Advisors, but it will not completely eliminate it.

“This project is the culmination of many years of hard work by the (housing authority),” Snipes said, “including the previous executive director Clarissa McAdoo-Cannion and previous and current boards of commissioners.”

Those who received the vouchers when they left the former Parker Riddick units will be able to return to the community, with no change in their rent.

“When both phases are completed, residents will enjoy the benefits of living in affordable units with better amenities,” Snipes said, “such as washer and dryer hookups, dishwashers, access to WiFi and upgraded recreation and community spaces.”

The housing authority will continue to manage and offer public housing at Colander Bishop Meadows, Hoffler Apartments and Chorey Park Apartments in the city — 260 units total.