Pharrell drops in on Suffolk students 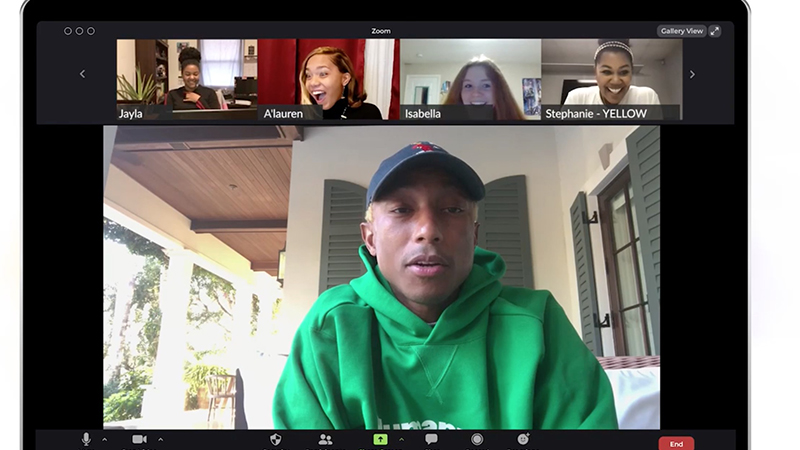 Pharrell Williams surprised Dr. Joleen Neighbors and her class, including Jayla Harris and A'Lauren Gilchrist during a Zoom class meeting to discuss the program.

A new program made its debut in Suffolk and came with a big surprise for one group of students.

Dr. Joleen Neighbors and her women’s choir class at Nansemond River High School were chosen to pilot a new program called Your Voice is Power.

This program is a partnership between Pharrell William’s nonprofit, YELLOW, Amazon and Georgia Tech. YELLOW was formed to create equality through education with its home base in Virginia Beach. Georgia Tech produced a coding software called Ear Sketch that uses code to remix music.

According to Neighbors, these students’ talent blew her away, but she was not the only judge. In a surprise visit, Williams himself joined the class’s Zoom meeting to listen to their remixes of his song.

“It honestly felt like a dream,” said Jayla Harris, a sophomore in the women’s choir. “I never thought I could just sit down and speak to a celebrity or just have direct contact with them. I’m still shocked that I was given that opportunity to meet Pharrell. It was also inspiring how he talked about how this world needs to change for the better and that we are the change happening.”

The students in the class used Ear Sketch to remix Williams’ song “Entrepreneur,” which talks about the hardships of minority business owners. Using the Ear Sketch program, the students analyzed the lyrics to see the power of music and the reality of the social justice movement behind the lyrics as they created their own remix of the song.

The conversation opened for the young women to talk about what they want to see in the future and what they have experienced in their past.

“It opened my eyes to how everyone around me feels,” said Madison Slabaugh, a junior in the women’s choir class. “The entirety of 2020 was hard for everyone, but I got to hear testimonies from my classmates that made me gasp. It was just a really powerful program that brought so many different people together.”

Not only did the students learn about the gravity of lyrics, but they also learned how popular music is made as well.

“This program taught me how music is made, and I really loved being able to put another skill under my belt,” said Isabella Brown, also a junior in the women’s choir. “It also taught me that music comes from many different places we may not have thought about before. Music can be made without any insight into the education of it, like humming, banging on things, etc. Then you add the technicalities to it, and it makes you love it even more. Then you get deep into how it is created, and it is fascinating. Rather than just knowing about coding, I know how to do it and how extensive the process is, and it makes me appreciate music and producing even more than I already did, if that is even possible.”

According to Neighbors, this program helped many girls think about career options for their future and created a bright spot for this hard school year. This program covered many interest areas like music, coding, and business and entrepreneurship, giving young women the opportunity to think about their options.

“It opened my eyes to a world of careers that would interest me,” said Harris. “I remember when we first were introduced to the Your Voice Is Power campaign. My eyes lit up with pure fascination, and I was completely engrossed in what I was seeing. I genuinely had so much fun, and it brought me to thinking that maybe I do want to do something incorporating music. I’ve had the thought that I would want to get into something music-related as a career before, but the idea came and went, but now it really has me thinking that I would love to.”

Neighbors has already incorporated Ear Sketch into her other classes after the success of the pilot launch. This program is a unique opportunity for high school students, and she is excited to help them in this journey.

“Some of the best young adults are from Suffolk and will be making a difference one day,” said Neighbors. “Proud is an understatement.”