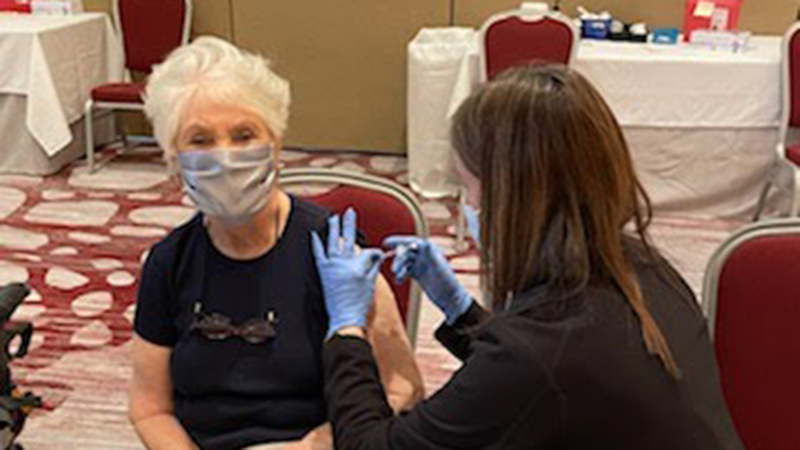 For the past month, Bayview Physicians Group has given thousands of vaccines to its staff and patients. With the transition into Phase 1B, the focus is now on the most vulnerable demographic to the COVID-19, those over 65.

At a single event on Feb. 4 at the Hilton Garden Inn on East Constance Road, the physicians group gave out around 600 vaccines to Bayview patients. The vaccine clinics began in phases starting with 80 and up, and this event was focused on the 75-and-older age range.

“Those with the biggest risk of a bad outcome from contracting COVID-19 is this age group,” said Dr. Jeff Forman, the chief medical officer at Bayview Physicians Group. “Statistically, 50% of those who have died are over 80 years old. Age is the most significant risk factor.”

Bayview Physicians Group made a list of patients in the targeted age group to receive an email invitation to schedule their vaccination appointment. There can be anywhere from 2,500 to 3,000 slots that fill up within two hours. Those who didn’t quite make the cut are put on a waiting list to be scheduled in the next vaccination group. With the vaccines from the health department varying in numbers, most of the time, patients get their invite only a few days out once the dose numbers are finalized. Once a vaccine is given, that patient is scheduled for the second dose four weeks later.

Two patients that received their first Pfizer vaccine shot this week were Billy and Pat Brett, who have lived in Suffolk their entire lives and been married for 59 years.

“Everyone should be thankful it’s available and make use of it unless, of course, they have a reason they can’t,” said Pat Brett. “It was such a convenient setup. It was a really good facility and a great way to do it.”

“We appreciate Bayview for the opportunity,” said Billy Brett. “Now I’m ready to get my second one.”

Over the last few weeks, Bayview has been planning to get vaccines out to the community. The physicians group works with the Western Tidewater Health District to get the vaccines for these clinics. Since the clinics are only hindered by the number of vaccines they receive, the number varies on how many they can give each week. According to Forman, Bayview has made an extra effort to handle the vaccines properly and has not wasted a single one. They are receiving both Pfizer and Maderna vaccines and use whichever one is available for their clinics.

This clinic was the most socializing these seniors have gotten in the past year as they talked to others sitting six feet away. This vaccine is a step towards normalcy for many in that room.

“It’s so touching how appreciative the patients have been,” said Forman. “There are literal tears of joy for this vaccine because they see this as a pathway out. For some, this is the most socialization they’ve had in a year. The isolation this pandemic, especially for the elderly, has been heartbreaking.”

According to Forman, reports say only 30% to 50% of people want the vaccine, but he has seen the elderly population latch onto the opportunity and be thankful that they did. He sees this as a step closer to achieving herd immunity once the vaccine is more available.

Many people are skeptical of the possible side effects of this vaccine. At the clinics, a medical team is ready for emergencies, but the older population usually has no issues. According to Forman, it’s the 50 and younger group that tends to have anaphylactic reactions or flu-like symptoms from the vaccine. The 50 and above crowd usually has a sore arm, if anything.

“Vaccine is very safe and effective and is our pathway out of this pandemic,” said Forman.