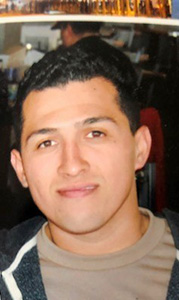 UPDATE: Oviedo has been safely located.

Earlier: The Suffolk Police Department is seeking the public’s assistance in locating a missing endangered adult, according to a city press release.

Oviedo is a 27-year-old Hispanic male who is approximately 5 feet, 6 inches and 180 pounds. He has black hair, brown eyes, and a medium complexion. He was last seen wearing a dark navy blue sweatshirt, dark gray sweatpants, and light colored shorts.

Oviedo may be driving a 2015 Dodge Durango, silver in color, with California plates 8KYT589.  Mr. Oviedo may be suffering from a medical condition, and if seen, please don’t approach, but contact Emergency Communications at the Suffolk Police Department, at 923-2350, option 8.