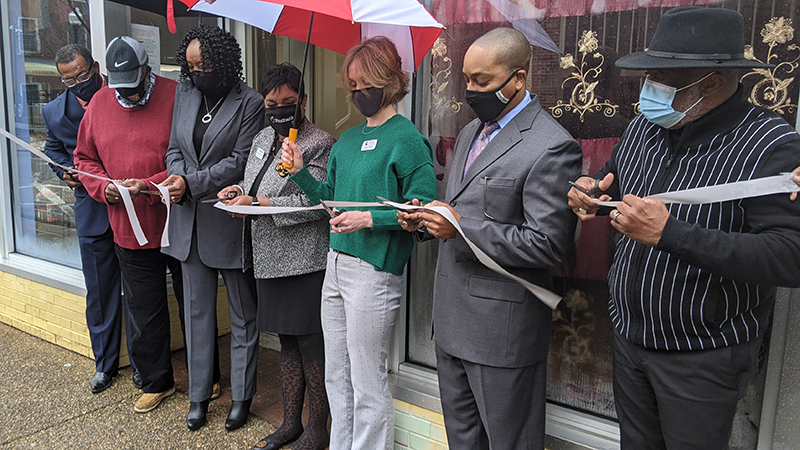 Lorna Slaughter and the Suffolk Christian Fellowship Center’s food pantry might not be able to help everyone, but it is trying.

Her efforts, alongside those of the Foodbank of Southeastern Virginia and the Eastern Shore and the Obici Healthcare Foundation, have resulted in upgrades to add capacity and revamp its downtown, East Washington Street distribution center.

She likened her efforts to that of the starfish parable, in which a man asks a boy why he kept throwing starfish back into the water from the thousands on the beach.

The boy, as Slaughter recalled during a Feb. 12 ribbon cutting, said he may not be able to save all of them, but he can make a difference to the ones he can save.

“I happened to be outside one day and I was cleaning up the area right here on the street and some of the boxes of food that had gone out the door, some of them had left some of the food out,” Slaughter said. “And a gentleman walked up to me and he said, ‘You know, I don’t necessarily know why you do what you do, I don’t know why you’re even doing this, because everybody that comes in there, all of those people, they don’t all need this help.’

Slaughter said the center aims to maintain its status as a place for help, and it has continued to evolve.

The center, with its latest upgrades, has added a pair of refrigerators, freezers, shelving and expanded spaces, as well as a new paint job and a mural to encapsulate the center’s mission.

“We added refrigeration, we added more shelving space so she’ll be able to have more healthy food to meet the increased need of all the people that’s coming in,” said Clifford Hedgspeth Sr., Western Tidewater branch manager for the Foodbank.

Slaughter’s goal is to make the shopping experience easier and more pleasant and allow people to get the food they need without feeling stigmatized.

“We have made needing help almost a bad thing,” Slaughter said. “And it should not be that way because everyone at some point in time in their life needs help from someone else. In doing so, one of the things we realized is, if we design and structure our pantry, our distribution centers, to look more like a grocery store, then it would enhance a person’s ability to come in and not feel so weighted by the fact that they’re coming into a food pantry.”

Hedgspeth was hands-on in making sure she had that help, performing his own site survey of Slaughter’s space. Having been a designer in the past, it was a role well-suited for him.

He met with Slaughter and helped assess the space, taking measurements and coming up with ideas to reimagine it to better take care of the people coming in to shop for food.

“By us increasing her refrigeration by 66%, she’s able to have more healthy food, more vegetables and fruits, and dairy, so that was big,” Hedgspeth said. “We know by giving it to her, she’s going to get it out and that’s what made her appealing to us, because we’re going to find someone who’s already doing a good job and then make that job better.”

Slaughter even got a new mural from Clayton Singleton of Norfolk that she said perfectly captures what the center is trying to do. The idea for the mural — depicting hands holding a plate highlighting its volunteers and what it does — came from Jones Nichols. Slaughter said it’s as if Singleton took the idea out of her head and put it on the wall.

“It represents us to the core,” Slaughter said, “not just what we do, but who we are.”

Hedgspeth said to expect other Foodbank initiatives in Western Tidewater, with a mobile market on the way as well as a community produce hub in Franklin. He is in the process of evaluating all of its sites and partners to determine how it can help them most.

Slaughter said the coronavirus pandemic has only increased the need for services like what she provides. The new upgrades, she said, will only help in the center’s efforts.

“In the initial timing of the pandemic, we actually found ourselves bum-rushed, if you will, (as) the numbers increased, the demand increased,” Slaughter said. “However, the amount of food we were getting, the donations we were getting, especially from the stores, they decreased. And so, we, of course, had to make sure even if we could not give the amount that we would normally give, we wanted to make sure we would still be there, so no one left out of this location empty-handed.”

And with the new upgrades to its distribution center, Slaughter hopes to partner with other food pantries in the area that have not been able to do as much due to COVID-19.

“Moving forward, what we want to do is to fill in gaps,” Slaughter said. “Our welfare system is very fragmented, especially in the world of food pantries, so our hope is that food pantries who are finding themselves with the population of seniors who can no longer do what we do because of the COVID, but they still have a heart to serve, we want to try to bring them together.”