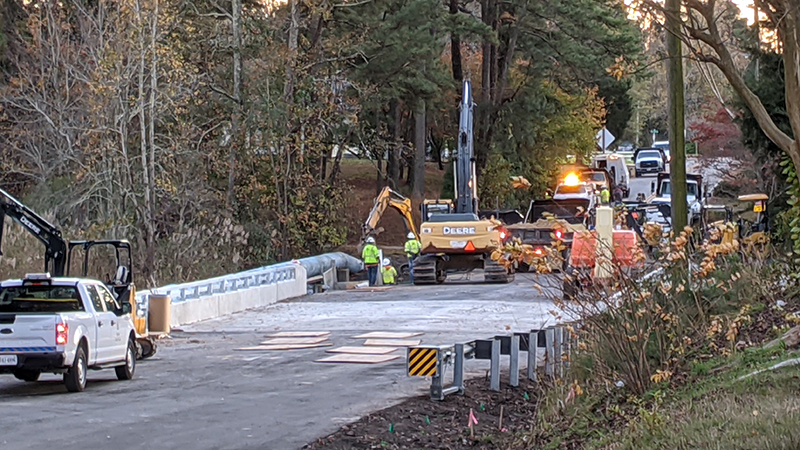 The Wilroy Road Bridge, shown here just prior to its reopening last November, will soon have periodic lane closures to address issues with the guardrail and shore up the asphalt surrounding it. The work is expected to begin in March or April and take up to eight weeks. (file photo)

Suffolk is moving forward on several bridge projects — one that is wrapping up and three others set to begin this spring and summer.

The new bridge on Wilroy Road between River Creek Drive and Lassiter Lane, which reopened just before Thanksgiving, still has work to be completed, including work on the guardrails and on the low protective wall along the edge of the bridge.

The bridge originally closed last summer, and Allan Myers Inc. of Glen Allen began the work on the $2.3 million project to remove a trio of culverts and build a new bridge. It forced drivers in the area to detour up to seven miles as it remained closed for about four months.

While the work will not close the road around the bridge as it did last year, Hansen said there will be periodic lane closures, some of those for an extended period. The work will begin in the March-April timeframe and is expected to take six to eight weeks, according to Public Works Director L.J. Hansen.

Hansen, in a Feb. 17 presentation at the City Council work session, said the road narrows and, approaching the bridge southbound, a guardrail sticks out toward the road.

“This is not a desirable circumstance,” Hansen said. “This is a stop-gap measure that we had to take at the time.”

Hansen noted that with a force main — a pipeline that moves pressurized wastewater from the discharge side of a pump to the discharge point — under the ditch and a drainage pipe that is in the ditch, trying to get the guardrail to work as it was originally designed was not possible to finish before the road opened. However, he stressed that the road is safe as it is, even with the “element of risk … a little bit high” with the guardrail sticking out.

“We had a deadline to get the road opened,” Hansen said. “We took the stop-gap measures to get us there and then went back and did a rework on some design of how we’re going to fix that and how we’re going to widen that out so that when the road is completed, it’ll be a much smoother transition.”

Hansen said the work to address the guardrail would include having to pour some concrete adjacent to the bridge, which gives it strength. The existing guardrail will have to come out, which means barricades will have to be put in and there will be a need for lane closures on the bridge. But he said there wouldn’t be a total bridge closure or closure of the road surrounding the bridge, noting the hardship it would put on drivers navigating that area.

“For the most part, we believe that single-lane closures will be relegated to day-long for multiple days in a row,” Hansen said, “but there may be a couple of times when we have to have the road lane closed overnight. There will be no total closures.”

As part of the work, the city is going to address asphalt issues around the bridge. Hansen noted that it’s not to the standard that the city would like it to be.

Allan Myers Inc. will also be performing the work to replace the bridge deck and superstructure to the 400-foot long, 31-foot wide Lake Cohoon Bridge on Holland Road over the CSX railroad line.

Hansen said there is significant degradation in the bridge, which dates back to 1962, and there is a steel plate on top of it. While the abutments and columns will be restored on the nearly 60-year-old bridge, they will not need to be replaced.

Hansen said representatives for the contractor have reached out to nearby Missouri Baptist Church at 2020 Lake Cohoon Road, and it will be using part of the church property as a staging area for the project.

The city will advise the public on road closure dates and detour information and will post signage ahead of the road closure.

“We’re expecting to be open by the end of the year, but until we get started on this one, I can’t say that with absolute certainty,” Hansen said.

Hansen describes the roughly 100-foot Carolina Road bridge between Cypress Chapel Road and Babbtown Road as “rather nondescript” and said if drivers are coming from North Carolina and approaching it on State Route 32, “you may never even know that this bridge is there.”

But it’s one that’s important for haulers, as it currently has load restrictions on it, and the bridge will be completely replaced over a 10-month period beginning this summer. The city has not yet hired a contractor for the project.

Though relatively young by bridge standards — it was built in 1972 — the foundation the bridge was built on has soils behind the abutments that have moved around, and the city has had problems in trying to maintain it. The bridge has had some cracking and other issues.

Hansen said there has been paving of Route 32 from the area around the Suffolk Executive Airport south and more paving from the North Carolina border north on the road.

The area in between has not yet been paved, Hansen said, due to the pending work on the bridge.

“We didn’t overlay it because we knew we had this bridge project, and upon completion of the bridge project,” Hansen said, “we’ll go in, we’ll finish out all the asphalt, and then (Route) 32 will have been completely repaved.”

Hansen said there are a number of potential detours associated with this project, and the city has been working with the North Carolina Department of Transportation on detouring all truck traffic from Route 32 to U.S. Route 13. He said NCDOT would add whatever signage the city requests to let drivers know of the detour.

“That will necessitate an increase of truck traffic on Route 13,” Hansen said, “but we believe that vehicle traffic will have a number of options to get through.”

Hansen said it is the city’s intent not to allow truck traffic on Cypress Chapel Road and other similar roads in that area.

The steel-timber Elwood Road bridge, which goes over Kingsale Swamp and is just north of Glen Haven Road, is typical of what’s seen on the city’s secondary and tertiary roads and is structurally deficient. It also has load restrictions in place.

“It’s been in place since 1962, but obviously, steel in a swamp environment doesn’t hold up terribly well, and you can imagine after 50-something years, it’s time to come down,” Hansen said.

The bridge, at about 31 feet in length, will be completely replaced beginning this summer and the project will last about nine months.

The road surrounding it will be completely closed when the project begins, and because it is on a less-traveled secondary road, Hansen said it would likely be able to be completed faster than other bridge projects.

City Council, following a public hearing at its Feb. 17 meeting, adopted an ordinance allowing the city to acquire temporary construction easements for the project.