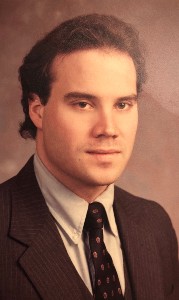 Bruce Burrell Marr, 66, of Chicago died Feb. 22, 2021, of complications from an illness. He was born on March 15, 1954, in Rochester, N.Y., the son of the late Rev. Robert Burrell Marr and Barbara Putnam Marr of Suffolk. He spent his childhood years in Conneaut, Ohio, and Suffolk graduating in 1972 from Suffolk High School where he played on the high school tennis team and in the school band.

He earned his bachelor’s and master’s degrees at the University of Virginia, working summers as a lifeguard at Silver Bay YMCA on Lake George in upstate New York and as a lifeguard and waiter in Charlottesville. He had a love for the theater, and he acted in starring roles in the musical “The Fantasticks” and other productions in high school and college.

He earned a Juris Doctor degree at DePaul University College of Law in Chicago. He went on to live and practice law in Chicago for many years, becoming a partner in the law firm McKenna Storer. Bruce, known for his kindness, loved Chicago life and the friends he made there, residing for many years in the historic Pencil Factory Lofts in Chicago’s Roscoe Village neighborhood.

Bruce was the fourth of five children and is survived by his loving four siblings a brother, Wayne Marr and his wife, Bobbie, of New Market, Md.; and three sisters, Lauren Marr and her husband, David Wood, of Middle Grove, N.Y., Diane Marr and her husband, John Asiel, of New York City and Sarah Marr of Colorado Springs, Colo. He also leaves an uncle, Frederick Marr of San Diego, Calif., and several loving cousins, nieces, nephews, grand-nephews and grand-nieces.

Arrangements are being made by R.W. Baker & Co. Funeral Home and Crematory of Suffolk. A private burial will occur at Cedar Hill Cemetery next to the plots of his late parents. A celebration of life service will be announced later.

Donations in Bruce Marr’s memory may be made to PAWS Chicago, Silver Bay YMCA at Silver Bay, N.Y. (Fund for Silver Bay), or the charity of one’s choice. Condolences may be registered at RWBakerFH.com.