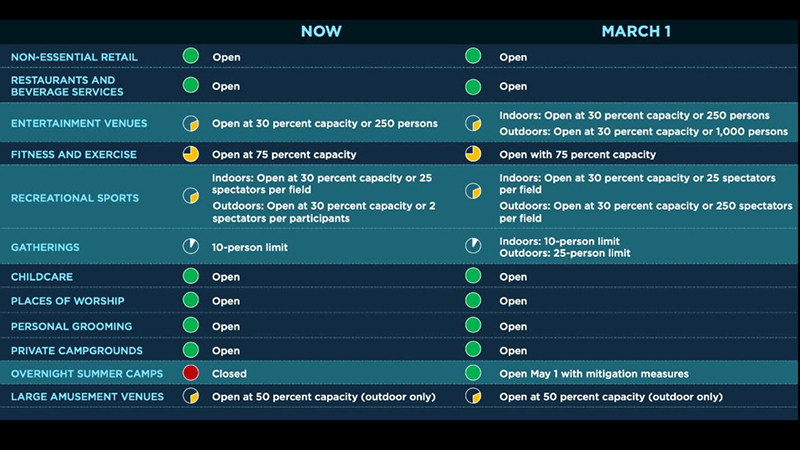 Outdoor social gatherings will be able to increase from 10 to 25 people, and outdoor entertainment venues can increase capacity to 30% capacity, though the maximum capacity will be capped, for now, at 1,000 people, up from 250 people. The 1,000-person cap could be removed by April if health metrics continue to trend downward in number of cases and hospitalizations. Indoor capacities remain at 30% or 250 people, whichever is lower.

Northam also announced a rollback on the modified curfew that had been in place, removing the midnight to 5 a.m. curfew, and will allow alcohol sales to be extended from 10 p.m. until midnight. All restaurants and alcoholic drinking establishments still must close between midnight and 5 a.m.

“Now, almost two months past Christmas, and with thousands of Virginians vaccinated, we’re finally seeing COVID numbers fall, and vaccination numbers rise,” Northam said during a Feb. 24 press briefing. “That means we can start to consider how to slowly, safely ease some of the measures we put in place before the holidays.”

Overnight summer camps will also be allowed, with strict mitigation measures, as of May 1.

These guidelines will be effective for at least the next month. He said current guidelines for retail businesses, fitness and exercise, large amusement venues, and personal grooming services will remain in place. Individuals are strongly encouraged to continue teleworking if possible.

Northam said the state has come a long way as the state prepares in early March to mark the one-year anniversary of the first COVID-19 case identified, but added that it is critical to take slow, thoughtful measures in easing restrictions.

“We will be working with venues to strengthen their ability to implement safety measures,” Northam said. “And we hope that with trends continuing as they are, we can look at further steps in the coming months, but it’s critical that we do this slowly and thoughtfully.”

The governor also announced that more pharmacies would be added to the federal partnership to provide free COVID-19 vaccines, which have been in short supply in the past week due to weather issues forcing delays in distribution.

CVS Pharmacy had already begun last week receiving about 26,000 vaccine doses through the Federal Retail Pharmacy Program for COVID-19 Vaccination. The program is a public-private partnership providing the pharmacy companies with vaccine doses directly from the federal government to vaccinate priority populations at no cost, by appointment only.

The vaccinations will be distributed to about 140 locations across the state, with the Virginia Department of Health working with pharmacies to determine where and how much vaccine to distribute in various areas. Most pharmacies will administer vaccinations in their stores, but Walmart will be holding off-site mass clinics in rotating areas of the state and will not be vaccinating in its stores.

Northam said there are still technology barriers to having the pharmacies work with the state’s pre-registration system online. The state’s call center will be making outbound calls to schedule appointments for Walmart and Giant Food, and the state is working to connect pharmacies to the state list.

“We’re doing everything we can to ensure that Virginians who signed up with the VDH are in line for a pharmacy appointment,” Northam said.

The 52,000 doses coming through the federal partnership come on top of the roughly 160,000 doses Virginia received this week to be distributed through local health departments and other providers.

State vaccine coordinator Dr. Danny Avula said the state would continue to prioritize getting those ages 65 and up vaccinated.

The state’s call center will be reaching out to people on the pre-registration list to schedule appointments for Walmart and Giant vaccination events. Other pharmacies will be using pre-registered people to schedule their own appointments.

Those who have yet to pre-register for a COVID-19 vaccine can do it by going to vaccinate.virginia.gov or calling 877-VAX-IN-VA (TTY users should dial 711). Those registering for an appointment at a CVS pharmacy should go to https://www.cvs.com/immunizations/covid-19-vaccine.

The Federal Emergency Management Agency will also be sending $179 million to the state to help it cover the costs to identify and set up future mass vaccination sites.

“We will be ready as supply expands,” Northam said. “But we do expect to see vaccine supplies increase soon.”

By next week, that supply could include a third vaccine, as Johnson & Johnson is expected to learn whether its one-dose COVID-19 vaccine will receive emergency authorization from the Food and Drug Administration. That would join Moderna and Pfizer-BioNTech as vaccines being distributed across the country.

State health commissioner Dr. Norman Oliver said there are about 12 mass vaccination sites that are expected to be staffed by contractors by mid-March.

“That will greatly increase our capacity … and we’re doing that in anticipation of increased vaccines coming to the Commonwealth,” Oliver said. “And we’d much rather be in the situation of having the sites up and ready and waiting for the vaccine than having the vaccine get here and then starting.”

Northam noted that nearly 500,000 people have pre-registered through the state, on top of the 1.2 million who had already signed up through their local health department.

He said he is hopeful that vaccinations can outpace the COVID-19 variants that have been found in the state and across the country. Health officials have said the variant first detected in the United Kingdom, B.1.1.7, is expected to be the prevalent one in the state by the end of March.