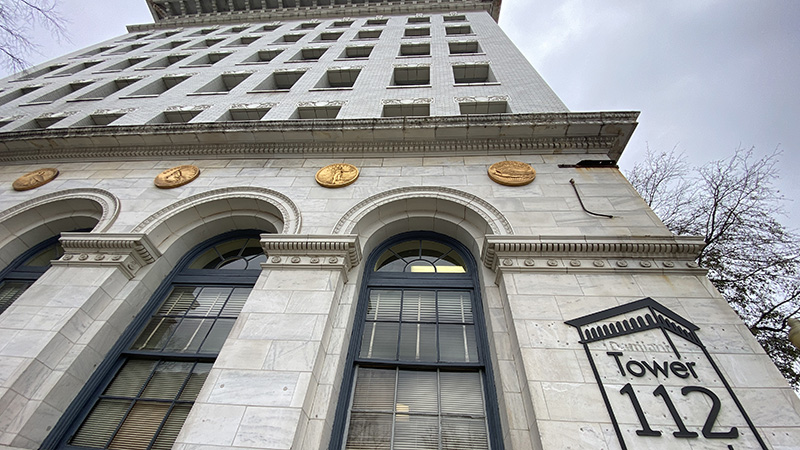 One of Main Street’s landmarks has been sold to a new owner.

Nahra has owned the building since purchasing, with his partner at the time Andy Damiani, from Frank Sheffer and Co. in March of 2014. Nahra and Damiani later renovated the inside of the building in 2015. Nahra eventually took over after Damiani’s passing in 2017.

This sale comes at a time when Nahra wants to slow down due to his age and health. He hoped cutting back would let him have more time to travel the world; however, the pandemic has not let him do so.

Nahra previously worked for NATO for 35 years. During this time, he started buying real estate in Suffolk. Once he retired, Nahra became more involved in real estate, including his purchase of Tower 112.

Nahra lives in Virginia Beach but comes to Suffolk daily, where he still owns numerous properties. With this sale, he is moving his office to 318 W. Washington St. for N & N Land Co. LLC. Even though he is cutting back, Nahra reassured that “Ralph is still around.”

“Suffolk is coming alive,” he said. “We are going to see a lot of action in the future. This is a landmark building, and the area around it is building up.”

The Tower 112 building is more than 100 years old, and the first floor used to be a bank. The building has seven floors with a mezzanine and about 28,000 square feet. There are 80 offices and currently, 28 tenants who are using one or more of these offices. Nahra wanted these offices to be spaces for new businesses to come and have a successful start. Even though Nahra is selling, he said, the tenants at Tower 112 will remain in their office space.

“Deep inside, I’m sad to let it go, but sometimes you just have to make decisions,” said Nahra.

The new owner of Tower 112 is Dan Singh, who owns single-family homes in Suffolk along with some restaurants. His new company plans to rename the building to 112 Tower Inc.

“We are hoping to make some improvements to the property to maintain a good setting for our tenants,” said Singh.

Improvements and repairs resulting from a fire in 2019 have already been completed. According to Nahra, it was mainly on the roof and caused no structural damage. The building never had to close, but the seventh floor was redone due to water damage.

Nahra is looking to the future after his big sale and claims he will never retire. He is currently working on a new smartphone application called LoCode. LoCode is a universal digital address system. With a format similar to GPS applications, the applications can create an address or code to any location. According to Nahra, this can be for rural areas, delivery services or to exactly tell a friend where you are sitting at a concert.

“Don’t ever retire,” he said. “Do something, especially something to help and benefit humanity, especially in this pandemic.”