Young making the most of opportunity at Hampton 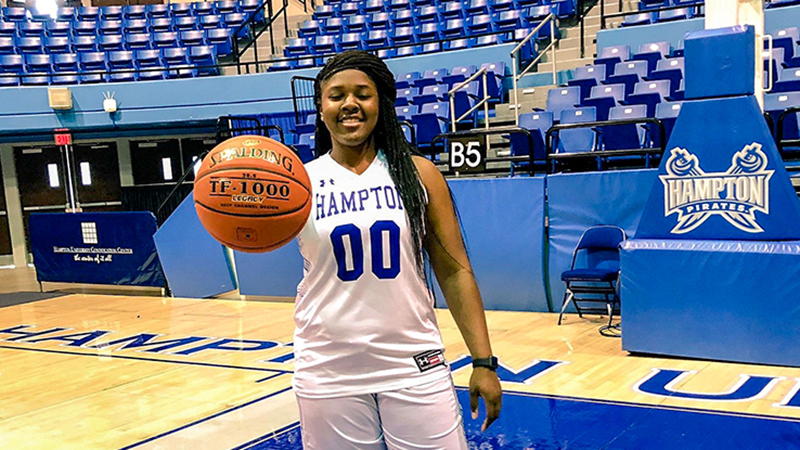 Nylah Young, a former basketball standout at King’s Fork High School, is the leading scorer and rebounder on the Hampton University women’s basketball team as a sophomore.

Nylah Young may have been a two-time All-State selection and Southeastern District Player of the Year while at King’s Fork High School, but she hardly expected to receive much playing time during her freshman year on the Hampton University women’s basketball team.

That changed not long after the season started and a spate of injuries forced the power forward into the starting lineup.

She was hardly fazed.

Young, who had averaged 29.5 points and 13 rebounds-per-game as a high school senior, including a 52-point game against Great Bridge, was named Big South Conference Freshman of the Week three times and wound up playing 29 games, starting 27 of them, and averaging 12.7 points and 7.1 rebounds per game in leading Hampton to an 18-11 record. Her season included 10 games where she had double-doubles — double-digit points and rebounds — as well as six games where she scored at least 20 points, including a season-high 30 points against Longwood.

Finishing first on the team in rebounds and third in scoring, Young, 19, was named to the Big South All-Freshman team.

Young, who describes her attitude on the court as an aggressive, even-keeled competitor,  spent a lot of time in the gym working to improve her game, and Hampton has needed her just as much in her sophomore season, as it lost four seniors from last year’s team and had to mix in four freshmen and others who transferred into the program this season.

Though the current season hasn’t gone as well as hoped for, with the Pirates being 4-11 overall and 4-7 in the Big South, Young leads the team in both scoring and rebounding, averaging 13.3 points and 6.5 rebounds-per-game. And, she is the only player on the team to have started and played in all 15 of Hampton’s games.

“We’re a new team, so we’re still trying to learn each other,” Young said.

Playing before empty arenas during COVID-19, the Pirates women started out slow this season, losing five straight before winning the next two games and four of their next six before losing four straight and having their next four games canceled due to COVID-19 concerns within Hampton’s program.

In the last game Young and Hampton played Feb. 20 against High Point, she had a double-double of 19 points and 10 rebounds in nearly helping the Pirates rally from a 15-point deficit to start the fourth quarter. They scored 31 points in the final frame only to lose on a missed shot at the buzzer. Playing High Point, now 19-6 (17-3 Big South) for the second consecutive game just after having their season pause due to COVID-19, the near win would have been big for the Pirates, who are in ninth place in the 11-team conference.

With COVID-19 posing its own challenges to even getting a season off the ground, Young said she was just grateful to be at the school and able to play.

“I didn’t know if I was going to have a season,” Young said. “All my teammates, we didn’t know. We were on pins and needles every day to see if we were coming back.”

She said the pace of play has been the biggest noticeable difference between her time at Hampton and in high school at King’s Fork, and called college play much more structured and rigorous.

Young is hopeful to be able to play professionally overseas when her collegiate basketball career is done,

The sport runs in her family, especially with her grandparents and her father.

“We always talk about basketball,” Young said. “It’s just a sport that I will always have in my heart.”