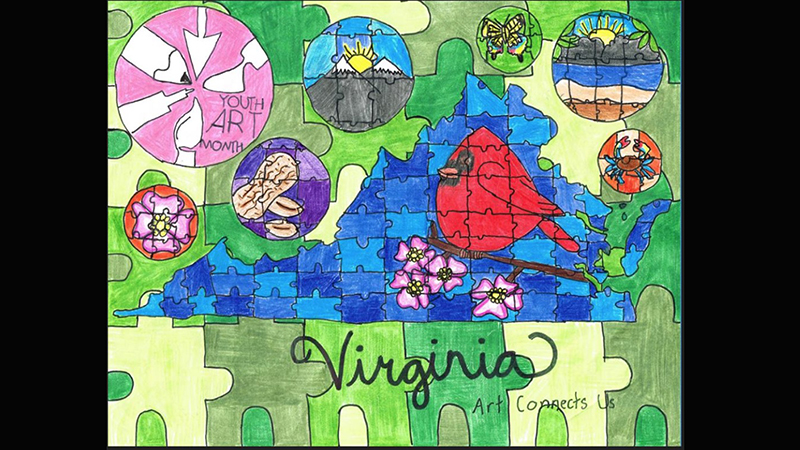 A Suffolk fourth-grader recently represented the city at a national art convention.

Emery McGee is a fourth-grader at Kilby Shores Elementary School who has a talent for art. Her drawing for the Virginia 2021 Flag Design contest won first place in the state.

Angie Salerno, the art teacher at Kilby Shores Elementary School, has been a member of the Virginia Art Education Association since she started as a student teacher 28 years ago. For the past 10 years, she has entered students’ work for the Virginia Flag Design contest, but this is the first year a Suffolk student won.

“I was so excited when she turned it in,” said Salerno. “Just holding it, I knew it was special. I chose to put it on the front board for the student and artwork of the month before I even found out it won.”

The Virginia Flag Contest happens every year for the National Art Education Association Annual Convention March 4-7 for Youth Art Month. Each state holds its own contest, and each winner gets to represent their state with their unique flag design. Usually, the flags are displayed at the convention; however, this year it was virtual, so each drawing appeared on the screen instead.

“I am so excited for a student to represent our state,” said Salerno. “I attended the conference virtually this year and was excited to see it. It was very incredible to see.”

The theme for this year was “Art Connects Us.” Participating students were asked to design a two-dimensional flag design that included the Youth Art Month logo, imagery to represent Virginia, as well as the state name and a connection to the theme.

“The theme was ‘Art Connects Us’ and I thought of puzzle pieces,” Emery said about her winning design.

The flag design was covered in puzzle pieces that made pictures representing the state. Various blue pieces created the state of Virginia, with a cardinal perched on a branch of flowering dogwood. The background is made of green pieces with more puzzle pictures around the state. The pictures include the regions of Virginia with mountains and the coast, the state insect — a tiger swallowtail butterfly — and a blue crab. While most of the flag represented Virginia, Emery threw in a reference to her city — one set of puzzle pieces created a picture of peanuts to represent Suffolk.

“I enjoyed making the puzzle pieces and the cardinal. I am excited that I won,” Emery said.