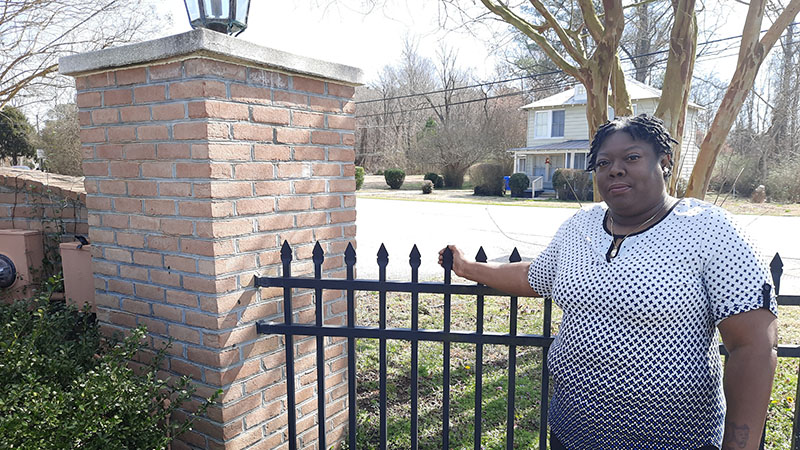 Kelsey Walker stands near her son’s unmarked grave at Carver Memorial Cemetery. She says his grave is among several that were lost when the cemetery changed hands from incompetent management in the mid-2000s.

More than two decades later, a horrifying circumstance continues to cause additional pain to add to her grief. Jaden’s grave was lost in the mismanagement that was occurring at that time at a cemetery on East Washington Street, so she no longer has a place to visit her son.

“It was right here,” she said at a recent visit to Carver Memorial Cemetery, ownership of which changed hands in the mid-2000s. She’s standing near the entryway to the cemetery and pointing out the brick column holding a lamp on the west side of the driveway. To the best of her recollection, her son’s grave is near, if not under, that column.

The burial ground now known as Carver Memorial was once owned by Abraham Applewhite. In November 2004, according to Suffolk News-Herald reporting, Applewhite was sentenced to 13 years for a string of charges relating to the operation of the cemetery. All but three months of the sentence was suspended. Applewhite was sentenced on charges of obtaining money under false pretenses, violation of a perpetual care agreement, writing worthless checks, illegally transporting bodies and conducting a funeral without a license. The cemetery was sold at auction for back taxes.

Applewhite’s license had been pulled in the autumn of 2003 after the state Cemetery Board received multiple complaints from residents and city officials frustrated by the lack of perpetual care, the condition of the roads in the cemetery and its general upkeep.

Walker remembers going to visit her son, and Jaden’s older siblings remember visiting, as well. He had a flat marker but no headstone, she recalls. She remembers seeing muddy construction underway at the site and trying to tell the construction workers that there were graves in the area they were working, but they brushed her off and told her everything would be taken care of.

She learned later that her son’s grave had not been recorded by Applewhite. By the time the new ownership had taken over, the damage was done.

“They could only go by what was recorded,” Walker said of Carver’s current ownership, of whom she spoke highly. “I know their hands are tied.”

Walker doesn’t believe she’s alone. She has posted about this issue on her social media and heard from about eight or nine other families that also lost their loved one’s graves due to the former mismanagement of the cemetery.

Walker came up with an idea. She wants to have a memorial placed at the cemetery with the engraved names of those whose burial places were lost. She’s now trying to locate all of the affected families so that they can have the names of their loved ones on the stone from the start, but she hopes there will be space to add others down the road.

Gail Turner of Carver Memorial confirmed on Tuesday the cemetery has offered to buy the stone.

“Carver is going to donate the stone to the families,” Turner said in a phone call. “And they will be responsible for adding the names to the stone.”

Walker said she believes this will allow herself and her other children, as well as other families, some healing.

“We’ve got a chance to get it right,” Walker said. “That’s what we all need — to make something right out of something that was wrong.”