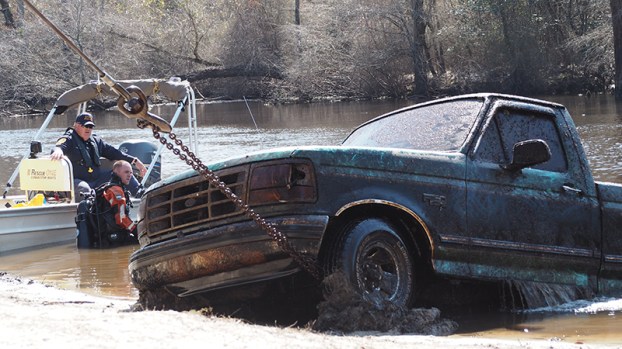 A State Police dive team recovered a 1994 pickup truck from the bottom of the Blackwater River March 10. 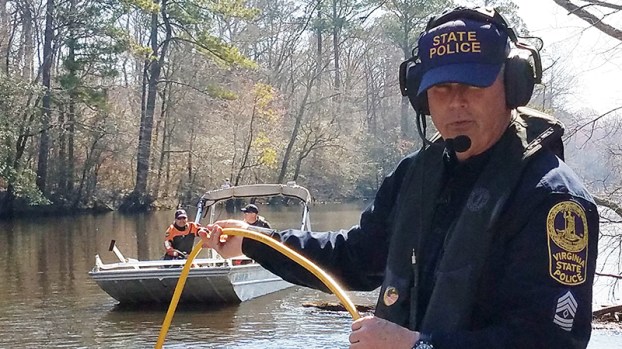 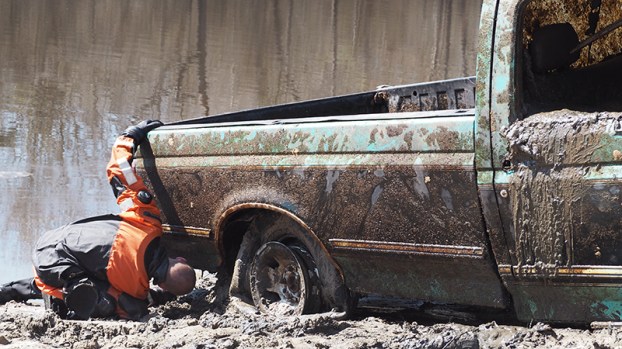 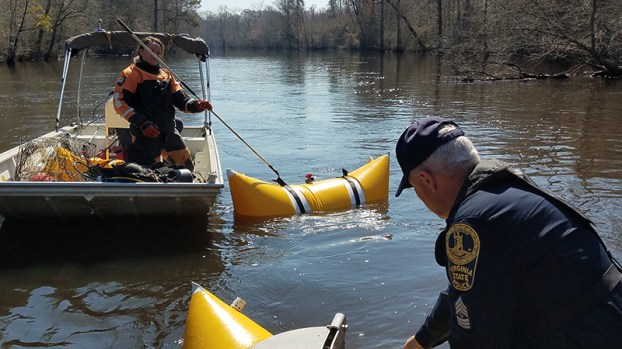 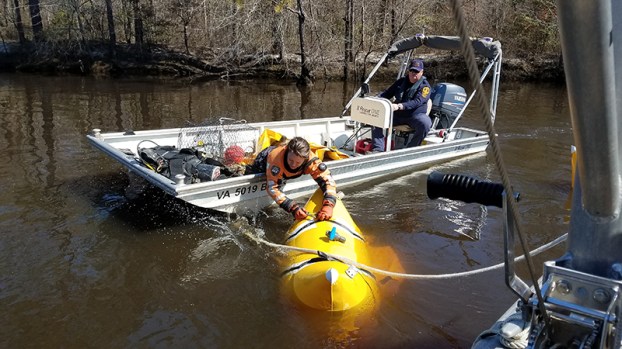 How they came to be down there and why remain a mystery, one the public is being asked to help solve.

As the State Police search and recovery operational coordinator, 1st. Sgt. Mike Berry leads the agency’s dive team, traveling with them all across Virginia and sometimes even into North Carolina to recover objects — and sometimes human remains — from bodies of water.

When it comes to vehicles, “They’re either stolen, insurance fraud, homicide, suicide or accident,” Berry said. “Some people just forget to put the parking brake on and they’ll accidentally just kind of go off the side, and then they panic and they go down in the car. Or like on highways, you know, they miss the curve and they’re off the road and into the farmer’s pond and no one ever knows what happened to them.”

Out-of-the-way places like Isle of Wight County’s Joyner’s Bridge boat ramp, where they found the Ford pickup and Plymouth, make perfect hiding places for criminals to dispose of guns and other evidence of their crimes, he said.

“A lot of people don’t understand just how much stuff is in the water as far as criminal evidence; it’s unbelievable,” Berry said. “You just slow down and in the water it goes.”

Sometimes the team gets called in by local authorities when fishermen report seeing something unusual on their boats’ fish finders. Other times, the team decides to proactively search an area, as they did in this case when they noticed the boat ramp while working another case in the area.

“I mean, you have a boat ramp in the middle of nowhere,” Berry said.

Berry is a 40-year veteran of the force. When he first started, “you just dove day after day” to find a car or a body underwater, he said. Now, State Police boats are equipped with sonar, which virtually eliminates the search part of search and recovery. Once sonar finds something of interest, the team places a crab pot at the site so the divers know exactly where to look.

Per the briefing he gave his divers at 8:30 a.m., the plan for the pickup truck had been to attach inflatable bags connected to compressed air tanks to each wheel and float the truck to the surface, where it could be towed to shore. There would be four two-person dive teams, each composed of a rigger, who’s responsible for attaching the bag to the vehicle, and the safety, who’s tasked with keeping the first person safe.

“Sometimes when you’re reaching … your arm is stuck, you get compromised,” Berry explained. “You don’t just send someone down by himself; it’s too dangerous.”

But after descending about 20 feet to the bottom of the river, the divers encountered a problem: the current was ripping the bags downriver. They couldn’t get them hooked to all four wheels and had to make do with two.

“So you just adjust,” Berry said. “We’ll get those bags out of the water and we’ll do it another way.”

Berry has wireless communications to talk to his divers while they’re underwater, but doesn’t rely on it, since frequently the battery will go out or the system will fail in some other way that prevents the divers from being able to hear or communicate with the people on the surface. When that happens, the surface and underwater teams rely on hand signals — by squeezing each other’s hands or pulling on a rope a set number of times — to communicate.

“That’s actually our normal way of doing it,” Berry said.

After three hours in or on the water, the dive teams had floated and towed the pickup back to the boat ramp, where a tow truck was waiting to pull it out of the water. Then, the land-based towing cable snapped.

No injuries resulted, but an officer had to call in a bigger tow truck to handle the load, delaying the recovery operation by about another half hour. Between 1 and 2 p.m., the pickup finally emerged, covered in sludge. Then came the moment of truth — time to open one of the windows and check for any bodies inside.

“A number of times we actually find the remains inside,” Berry said. “We did one a few months ago and found a white van and it was suicide. The man had cancer and nobody knew.”

He’d disappeared one day and his family had no idea what had happened to him. Being able to bring closure to families like that is one of the many aspects Berry finds rewarding about this job.

In cases like the pickup, where all the windows and doors have stayed closed over the years, the vehicle is almost like a time capsule “so whatever’s inside is still inside, which is good for us,” Berry said.

Fortunately, in the case of the pickup and the Plymouth, no bodies were inside either vehicle. Police had identified a third sunken vehicle on sonar, which they say is a convertible Porsche, but dive teams were unable to raise that one on Wednesday.

Now, state troopers are working with the Bureau of Criminal Investigation and the National Insurance Crime Bureau to attempt to identify the owners of the vehicles. To do this, they typically focus on each car’s vehicle identification number, or VIN, which functions as that car’s fingerprint, as no two vehicles have the same number.

“That actually tells us the story, the history,” Berry said.

Though any cases involving the two vehicles have likely been cold for more than a decade, State Police spokeswoman Sgt. Michelle Anaya is asking anyone with information on the matter to call 757-424-6800 or email questions@vsp.virginia.gov.

“You look at these cars, there is a detective or an investigator that worked these cases,” Berry said. “Cars disappeared and someone called them to assist, and no one knew what happened to them. And now we’re bringing some more pieces to that puzzle … sometimes we don’t solve the case but we contribute to the case. Now they know where that car is.”