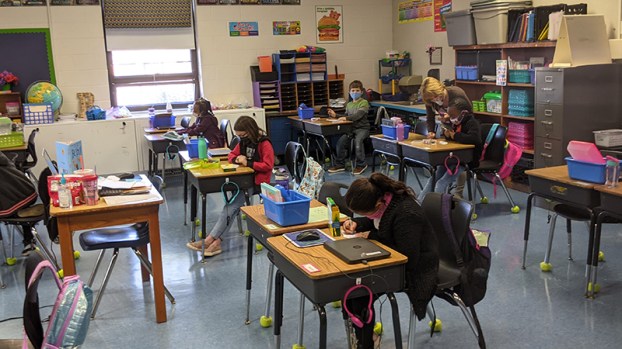 Students and teachers in Suffolk elementary schools went back to in-person classes on a hybrid model on Monday. 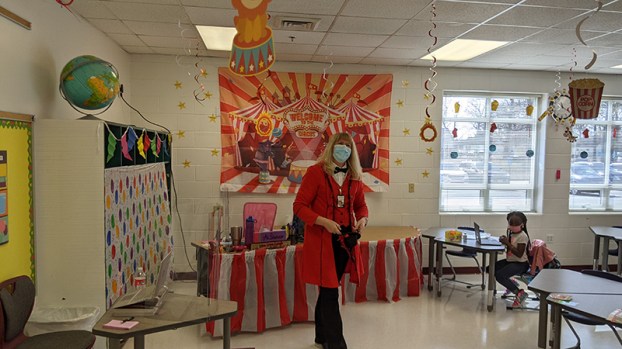 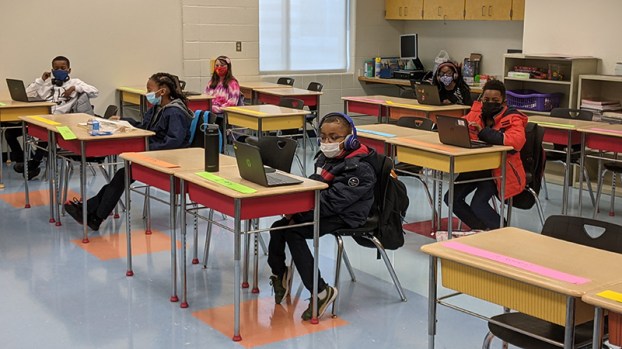 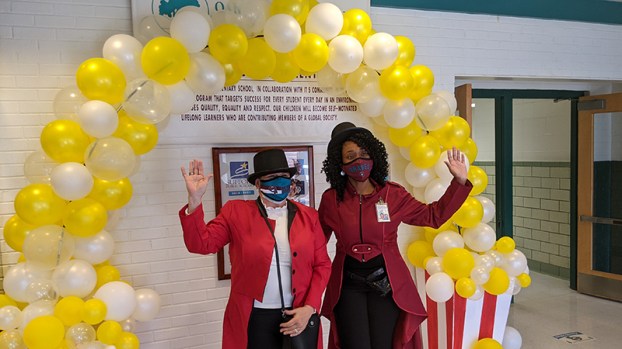 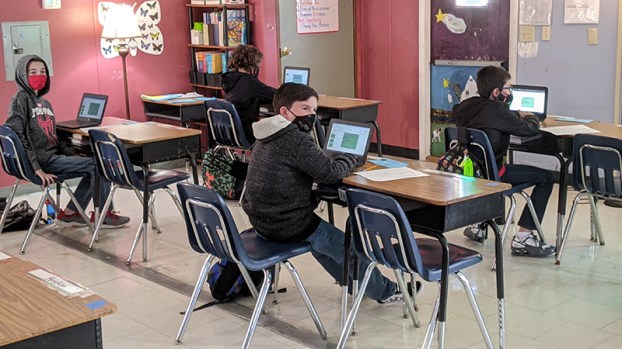 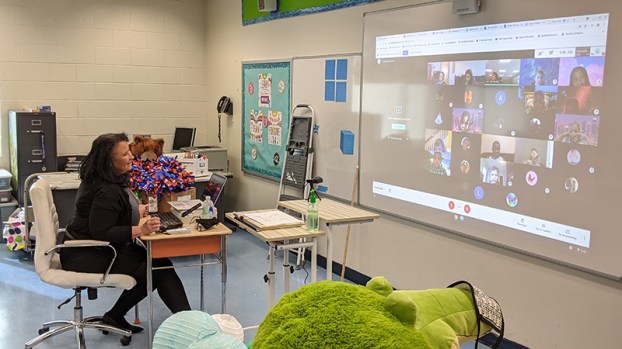 A bundle of nervous energy, she was ready for a unique first day of school, wearing her Creekside Elementary School shirt and mask, ready to greet the other Gators marching in.

She was ready to meet kids she already knew as friends thanks to virtual learning, and as they began streaming into the building, the energy became palpable, and she said hello to all of them.

Principal Tara Outland was up at 2 a.m. Monday on that second first day of school. As she read the morning announcements, she didn’t seem to need the opened Monster energy drink on her desk.

“I will have been in education 29 years this year,” Outland said. “It seems like my first year. I don’t think I was (ever) this excited. I don’t know, it’s just a different feeling.”

The big reason for the difference? COVID-19 — as if it even needs to be stated.

The last time students were in school, few had any sense of how long they would be out. Maybe it would feel like a few snow days, or an extended spring break, or most optimistically, a pregnant pause.

It turned into a pandemic one that went more than full term.

“If no one has told you yet, Ms. Outland loves you and is glad you’re back at Creekside.”

That was her parting message to close the morning announcements.

“I recently heard on the radio that kindness really helps release those endorphins in your brain,” Outland said, “and gives you that feel-good, so we’re just practicing kindness above and beyond to ensure that things stay positive, that we have a great start to the school year.”

At the top, it’s about building and enhancing relationships with children, reaching out to them and promoting positive behavioral interventions and supports, she said, getting hybrid students to adapt to a new routine of being in school twice per week and continuing with virtual learning on the other three days.

Stacked in Outland’s office was evidence of that new routine — stacks of boxes filled with see-through masks, thermometers and yoga mats for staff to help with their wellness.

All of the city’s elementary schools have literal signs of the changes that will be reinforced — stay six feet apart.

The less literal but obvious ones? Wear your mask over your mouth and nose and wash your hands.

And at the heart of everything?

“We’re going to do what’s in the best interest of the child always,” Outland said. “We’re here to make sure that they’re taken care of academically, socially and emotionally.”

Jessica Avery had a unique task on the first day back for students.

The Elephant’s Fork Elementary principal was going around from class to class to confirm which students would be riding the bus and which would be getting picked up by a parent or guardian.

As she dealt with that and other issues on the first day of hybrid learning, how excited was she?

“Very, very, very,” Avery said as she was checking in on classrooms. “We’ve been looking forward to this for months. Of course, we wanted the kids back as soon as possible. But to finally see the kids back, that is why we’re here, for the kids.”

Programs like the Canvas learning platform and Zoom kept students and teachers connected through virtual learning, and even as those programs will continue to be used for the all-virtual students and for the hybrid students on the three days they are not in classrooms, it’s a different, excitable energy when children are present.

“It’s nice to see the kids’ excitement, to see the teachers, it’s just a different type of sense of energy,” Avery said. “There’s nothing like having kids in the building. And parents were excited to drop their kids off too.”

The first day for each set of students will be spent working with them on social distancing, hand washing and keeping their masks on at all times — other than when they are eating at their desks.

“They’re rolling right into working, because they’ve been working all year,” Avery said. “Most of them have the same teachers, so it’s working out in that way.”

For morning announcements, kids will hear it live at school, and they’ll continue to be on Canvas for the virtual students. And though each grade level has a virtual teacher, all teachers on each grade level are planning together to ensure that students are completing the same work on the same skill so they aren’t being left behind.

Avery said she has been monitoring data to understand where to put resources in place to best help students who have struggled either academically, socially or emotionally during virtual learning, in some cases putting an extra teacher or teacher assistant into a class.

She also wants to make sure there are mental health supports for her staff, even as excited as they have been to teach students in-person again.

“We want to make sure that we’re providing any of the support for the families and the kids,” Avery said.

Just after she said that, Avery herself displayed some of her own hands-on support, tying the shoe of a first-grade student before whispering to her, “Make sure after you use the bathroom to wash your hands.”

Unprompted, Oakland Elementary School Principal Candace Myrick got a sense of what this first day would look like.

“I ran into a student at the Dollar Tree yesterday, and she was talking to the cashier,” Myrick said, recalling the encounter, “and the cashier asked her if she was going back to school. ‘Yes I am,’ the girl said, ‘and I’m so excited.’”

At Oakland, it was anything but a three-ring circus, though there were plenty of hula hoops.

Instead, it appeared more like the greatest show on earth — at least that was the theme in the decorations and with Myrick and other members of her staff dressed up under Oakland’s “big top.”

Buses showed up early and just two students came on the wrong day, with hybrid students put into two groups that will have one set attending school on Mondays and Wednesdays and another on Tuesdays and Thursdays.

Like other schools, they are enforcing pandemic protocols, using hula hoops to reinforce the concept of staying in their lane as a way to have them be mindful of staying at least six feet apart.

“I told everybody it’s like having two first days — we’ll do it all over again tomorrow,” Myrick said.

And though classrooms were less than full, with anywhere from three to 13 in classes observed at a trio of elementary schools Monday, there was an energy in the voices of teachers and staff, and a spring in their steps.

Students have quickly embraced being back in school, even having to wear masks.

“I thought maybe kids would be nervous because it’s different,” Avery said, “or unsure what to do. No. They’ve hit the ground running, and they’re excited about it.”

While computers have hummed as they Canvassed and Zoomed through virtual learning, and though there were a few kids in schools with the AlphaBest childcare programs and some in specialized programs, teachers and administrators alike noted the stark contrast between the quiet halls and classrooms that put a damper on the days, and the Monster-like energy that no drink can provide.

“It’s like you took my world away from me,” Outland said. “This morning, the kids reached up, and I was quick to do the elbow. That’s what you thrive off of. I’ve always said when I don’t love what I do, you won’t see me. And I love what I do, and today is just one more reason why, and it’s just one more confirmation why I do what I do.”