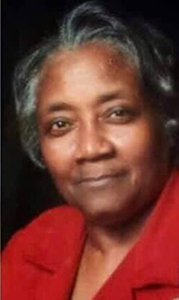 Mother Virginia Parrish Lewis was a member of Heaven on Earth Ministries, serving as the Mother of the Church. She was a long-time member of Faith Temple Ministries Apostolic Church under the leadership of the late Dr. Bishop Obadiah Colander, where she served on the Mothers’ Board, Missionary Board, Prison Ministry, Kitchen Staff, as a soloist, and a Prayer Warrior. She also previously served as Mother of True Word Temple of Faith Church.

She was employed as a cook at Simpsons’ Restaurant, Bunny’s Restaurant for more than 25 years, and as a bus aide for Suffolk Public Schools. Mother Virginia Parrish Lewis was an awesome seamstress, counselor and cook. Her delicious dinner rolls were everyone’s favorite.

A visitation will take place from 3 to 7 p.m. Friday at the funeral home. A funeral service will take place at noon Saturday, March 20, 2021, at Faith Temple Ministries Apostolic Church, and she will be laid to rest at Carver Memorial Cemetery.

Flowers and expressions of sympathy may be extended at www.cookeovertonfuneralhome.com.