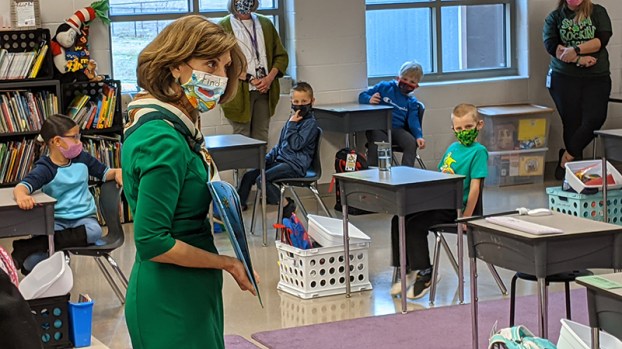 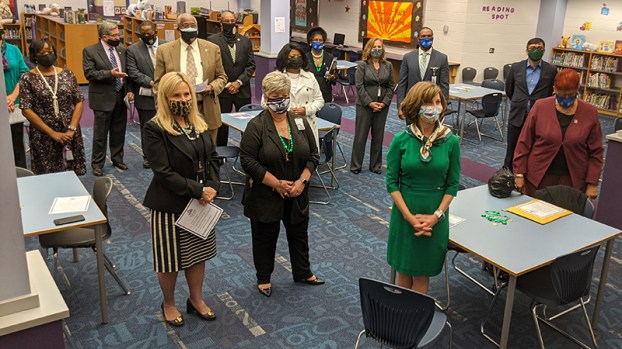 In her element, Northam read the book, “When Spring Comes,” to Kerry Patterson’s kindergarten class as students sat socially-distanced at their desks wearing their masks.

Northam, making at least her fifth visit to Suffolk since 2019, was at Pioneer Elementary with state Secretary of Education Atif Qarni as part of a tour of schools that have recently returned to some form of in-person instruction after not having that for more than a year due to COVID-19. Suffolk began in-person learning March 15 twice per week for elementary students in a hybrid format, and middle and high school hybrid students will return twice per week March 22.

“It’s always exciting when you have the First Lady,” Mounie said. “And we are thrilled that we can show our school off, to be perfectly honest. It was quite an honor.”

She, along with Gov. Ralph Northam, Qarni and other state officials have paid visits to 26 school divisions over the past two weeks.

“It’s a great step forward,” Northam said of students’ return to classrooms. “And we’re really seeing students coming back and parents understanding that their kids are safe. We’ve really done this for a while now, and we’re demonstrating that we can do this and keep kids healthy and learning throughout all this process.”

The First Lady asked each class whether they were excited to be back in school. In each of the three classes she visited, many of the students replied that they were.

Patterson told Northam she was happy to have students in her classroom again.

“I have some surprises they don’t even know about yet,” Patterson said, later saying “we’re really happy to see each other in real life.”

“We know it’s going to be a great finish to a crazy, crazy year,” Northam told Shelton’s class.

Northam said the governor has provided support to teachers by prioritizing vaccinations and securing raises for them.
“We wanted to really make sure that we stepped up for our teachers and make sure that they were the first ones in line to get vaccinations if they so wished to protect them,” Northam said. “And then we said we really want to put our money where our heart is and say you all deserve a raise throughout this very difficult year as well.”

She said pre-K-through-12 funding was an important step in providing social and emotional support for students and staff also, and said the governor and Qarni would be working to provide increased summer school money.

President Joe Biden signed into law last week the American Rescue Plan Act, which includes $122 billion to support K-12 school recovery efforts across the country, with 90% of the money going to local school divisions based on the federal Title I fund distribution formula. The other 10% will support state-level initiatives to help schools recover from the pandemic. State officials estimate that Virginia will receive about $2.1 billion, with $1.9 billion of that going directly to school divisions and about $200 million that will support recovery initiatives.

Gordon said this most recent visit by the First Lady and Qarni is another step in recognizing Suffolk Public Schools as a premier school division in the state.

“The fact that Secretary Qarni, (Superintendent of Public Instruction Dr. James Lane) and Mrs. Northam recognize that lets us know that we’re on our way,” said Gordon, who also reiterated his pitch to Qarni to provide more vaccinations for division staff, and he added a pitch to get additional COVID-19 testing available for students.

After her visit to Pioneer, Northam said she felt hopeful in spite of what she described as a sad year with loss for so many families throughout the state.

She said it is important for children to be able to learn in person, especially for children in special education programs, English language learners and elementary school students, but she also wants to take the “silver linings” that have come with virtual learning to allow students to stay connected with their classes.

“I have such hope seeing them today despite all the challenges they’ve had, they were doing amazingly well,” Northam said. “We know our scores that we’re getting are showing us that we have some deficits in literary abilities coming into kindergarten and some other areas, teachers are reporting some concerns about social-emotional development, so when we know what we need to be doing, we can make sure that they get the help that those students need.”