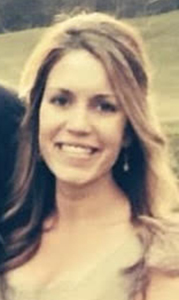 Kelly-Grier Ferguson Costin of Boone, N.C., moved to the side of her maker on March 19, 2021, after a brave three-year journey with colon cancer.

Born on July 2, 1984, Kelly-Grier was raised in Suffolk, while spending many summers at Nags Head with her friends and family. Baptized and confirmed at St. Paul’s Episcopal Church, she remained a person of strong faith through her life until the end of her struggle. Attending Nansemond-Suffolk Academy from kindergarten through graduation, she then moved on to East Carolina University, where she proudly graduated with honors. While at ECU, she was a member of Sigma Sigma Sigma sorority, which laid the foundation for several close, lifelong friendships dear to her heart.

Upon graduation, she moved to Charlotte, N.C., to seek a future in her love for apparel merchandising. While living in Charlotte, she met her husband-to-be, Ryan. His family business carried them to the mountains, where they resided in Boone, raising their family. Kelly-Grier loved Boone and Boone loved her back, developing many dependable and lasting relationships.

Kelly-Grier will be remembered for her indomitable will, contagious sense of humor, outright love of life, and a unique ability to make and hold close friendships, but most of all, for her unwavering love and dedication to her family. She will be missed by many, but is now at peace in a better place after her courageous struggle. A memorial service with placement of her ashes will take place at 11 a.m. Saturday, March 27, at St. Luke’s Episcopal Church Memorial Garden in Boone, N.C. The ceremony will be officiated by the Rev. Cyndi Banks of St. Luke’s and the Rt Rev. Keith Emerson of Saint Paul’s. Masks and social distancing will be in effect for this outdoor ceremony.

In lieu of flowers, contributions can be made to the Colon Cancer Coalition at coloncancercoalition.org.

“This world’s loss is the next world’s gain.”