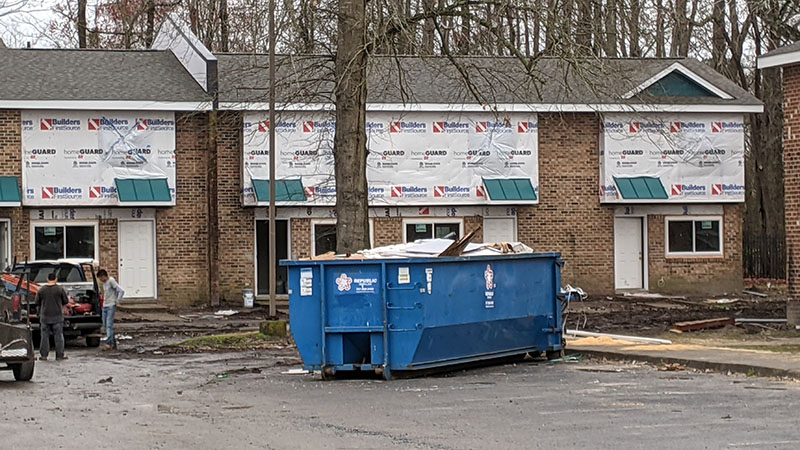 The former Parker-Riddick apartments now known as White Marsh Pointe have been torn down, while some of the buildings being rehabilitated at the former Cypress Manor apartments, now known as Eagle Landing, are weeks away from being complete.

A transformation is taking place on both sides of Davis Boulevard.

The 93 Parker-Riddick apartments are no more, the ground mostly barren and fenced off, awaiting its rebirth as White Marsh Pointe, which is expected to be delivered in 2023.

Yards away, the 113 apartments at Cypress Manor are getting a top-to-bottom makeover and will have a name-change of their own — Eagle Landing — with some of its buildings ready to be reoccupied in a matter of weeks, according to housing authority officials.

All of the housing is being converted to what was once known as Section 8 housing — now called the Housing Choice Voucher Program — as part of a $46.3 million project, structured as a low-interest tax community and is being financed by a mix of tax credits, a Suffolk Redevelopment and Housing Authority loan, $275,000 from the city and $1 million in grants from the Federal Home Loan Bank of Atlanta. The federal Housing and Urban Development endorsed the Federal Housing Administration-issued $23.1 million mortgage on the project.

During the construction phase and continuing until 2024, Vista Capital Management is managing the property, and then the housing authority will resume managing the properties. Both will be owned and managed by Eagle Landing Apartments LP, based on a long-term lease with the housing authority, with it as a 51% general manager and TCG Development Advisors as managing general partner.

The former Parker-Riddick residents received housing choice vouchers to use for other housing while the project is taking place, while the former Cypress Manor residents have been relocated to other buildings within that community while work on their units is being done in phases.

Tammy Jackson, community development director with the Suffolk Redevelopment and Housing Authority, updated the board on the project during its virtual March 23 meeting.

She said site clearing has begun at White Marsh Pointe now that demolition of the housing at Parker-Riddick, built in the 1970s, is complete.

“Everything has been completely demolished,” said Tracey Snipes, executive director of the housing authority.

Jackson showed photos to the board of the nearly barren land, save the foundations of the buildings and the parking lot that surrounded them.

“We’re going to work toward clearing out all the utilities to be removed, and we’ll be underway with the construction, hopefully soon,” Jackson said.

At Eagle Landing, Building 4 is nearly complete, according to Jackson. She said it received windows for the lower level earlier this week that had been on a months-long backorder, and next week, should receive the upper-level windows. Most of the carpentry is also complete, and kitchen cabinets have been installed.

“That’s probably going to be the first one that’s occupied,” Jackson said.

At Building 5, the drywall has been put in and the painting has been completed, and there has been progress on Building 6 as well, she said, as work continues on the awnings and painting of doors on Buildings 6 and 7, and construction workers are also working on the roof overhangs. At Building 14, workers are fixing the rear storage unit for each building.

When complete, residents will have amenities such as washer and dryer hookups, dishwashers, WiFi access and upgraded recreation and community spaces.

“With COVID, everything’s been delayed, materials have been delayed,” Jackson said. “We’re trying to stay on track as to what we estimated, but it will really be contingent upon us being able to receive the windows and also the appliances.”

The project has been a long time in the making, and the housing authority hopes it will help transform the lives of those living in both communities. Snipes said the housing authority would do its monthly walkthrough with Department of Housing and Urban Development and Virginia Housing Development Authority inspectors. She is tentatively planning a ceremony for May 27 on the project.

“We all know that the Cypress Manor/Parker-Riddick project has been in the making for 20 years,” said Commission Chairman Quinton Franklin. “We are realizing something that has been going on for quite some time, and I feel blessed … to be a part of this project. You all know my story as being raised in public housing in Suffolk. I just feel immensely blessed to be able to be in a position to see this happening, so I hope I’m still on the board when it’s complete.”