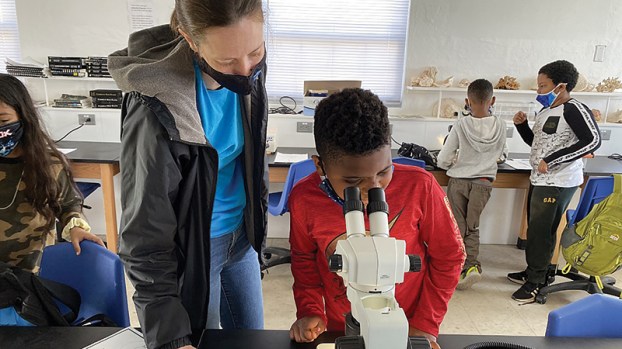 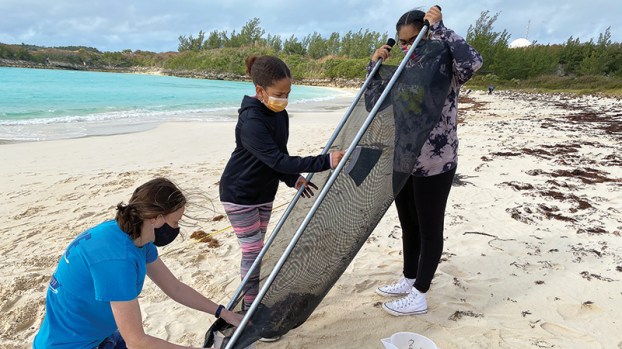 Susie Hill helps students in Bermuda work on a project. Some of the students’ projects involve ridding the ecosystem of invasive species or clearing the surrounding ocean of litter. (Submitted photo) 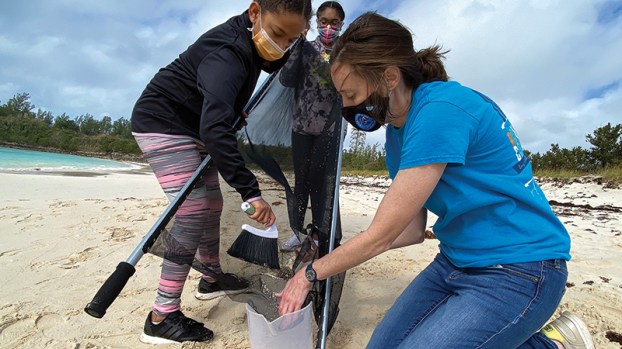 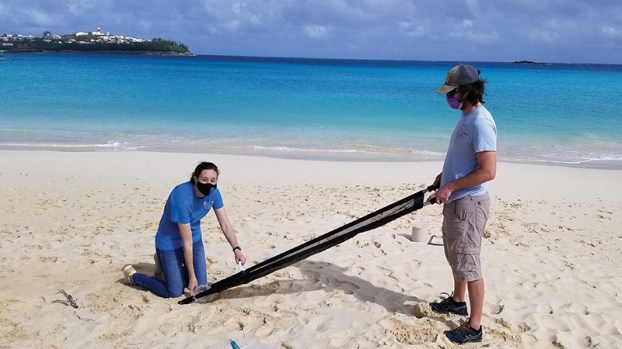 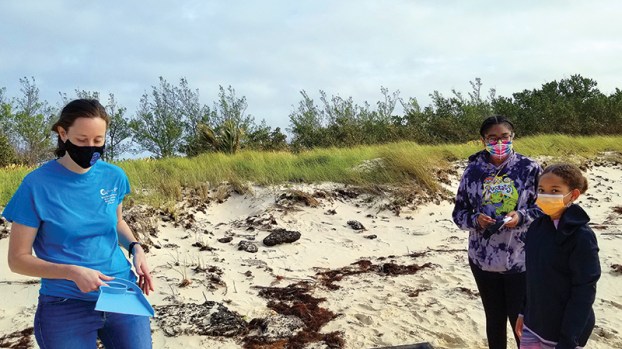 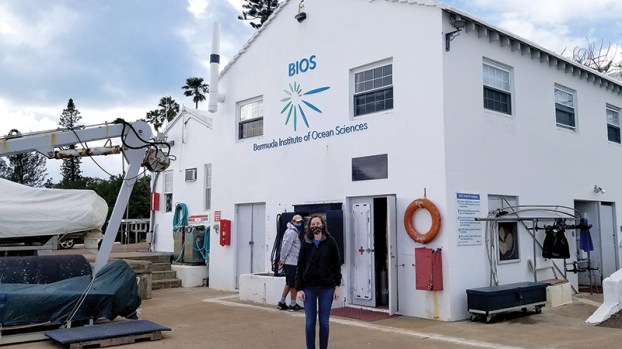 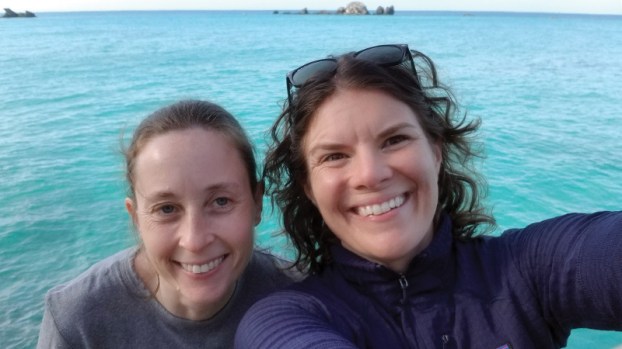 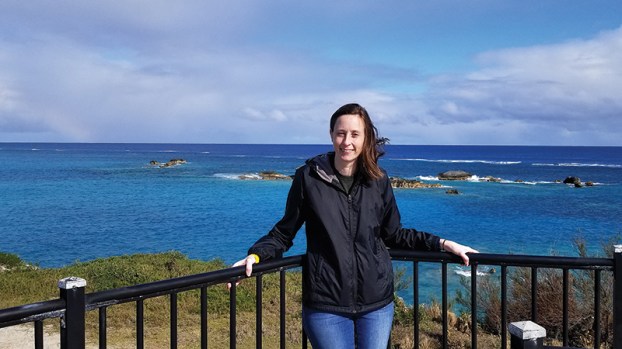 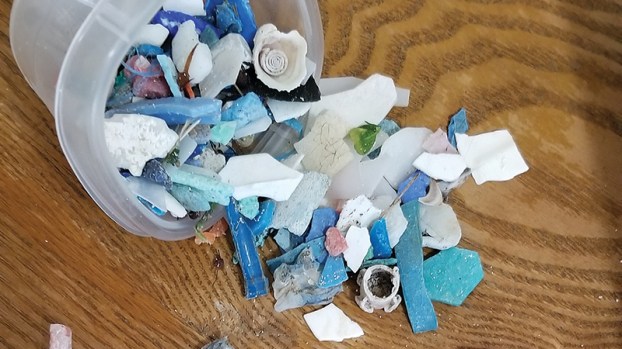 Marine biology is to robotics as Suffolk, Virginia is to St. George’s, Bermuda.
But Susie Hill has a connection to all of it.
Hill, a Suffolk native who grew up in Lakeside and has lived in the King’s Fork Farms area for the past 10 years, getting her degree in biology — with a focus on marine biology and zoology — in 1998 at Old Dominion University, put that degree to use as an education specialist and special programs manager for the past 22 years with Nauticus in Norfolk.
During her time there, Hill took charge of the MATE Mid-Atlantic Regional ROV competition — MATE standing for Marine Advanced Technology Education and ROV for remotely-operated vehicles — and has done so for the past six years. Hill has also focused on STEM-focused field trips and teaching about marine science.
All that got the attention of Kaitlin Noyes, and Hill, who had saved up copious amounts of leave, headed to St. George’s, in the northwest part of Bermuda, to the Bermuda Institute of Ocean Sciences, or BIOS, as a robotics education specialist.
After a quarantine period — which she’ll have to repeat upon her return to Suffolk — Hill got to work.
Since late January, Hill has been helping coordinate the MATE/MARINE Bermuda ROV Challenge — a competition for underwater robotics — for middle school to community college-aged students in Bermuda. It was originally scheduled for while Hill was going to be there, but due to COVID-19, it has been pushed back until April 17, almost a month after she leaves Bermuda.
She has also been helping with other BIOS programs such as microplastics and water cycle workshops and other projects. Hill, who is spending eight weeks in Bermuda, will finish her time there later in March.
“Because I had the experience there with Nauticus, between the robotics competition and just general education field trips in a museum setting, she asked me to come here,” Hill said.
But she didn’t really have any robotics experience until she was picked in 2012 to sail with Robert Ballard and the Nautilus Exploration Program. Yes, that’s the same Robert Ballard as the one who located the Titanic shipwreck in 1985.
Her pull into robotics at Nauticus came from that, with the previous person who had headed it up moving over to Sail Nauticus, but it didn’t take her long to fall in love with it once she immersed herself.
“It scared me half-to-death,” Hill said, “I was like, ‘I’m in marine biology. What do I know about robots?’ But it’s opened up the field for me to get here in Bermuda.”
In Bermuda, they are learning how to use underwater robots to pick up marine debris, using them to save ocean populations from pollution such as coral reef and invasive species.
Bermuda students will be doing studies of lion fish — an invasive species in the Atlantic Ocean off the coast there — and how they are hurting native species.
They are doing a simulation in culling lion fish, building underwater robots to do so made of PVC pipe.
There will be 10 to 15 teams from schools across the island, building underwater robots to do the simulations in a pool at the island’s national sports center. Hill has also been helping with the field trip groups coming to BIOS — teaching students robotics, about plankton, weather and the water cycle and pollution with microplastics.
Hill has helped create lesson plans with Noyes about those subjects.
“It’s been an amazing experience,” Hill says, “because I get to do the same thing I do at Nauticus, but in a different setting.
The weather hasn’t hurt.
“Right now, it’s a whole lot more beautiful,” Hill says, laughing, during a late February interview just after the Suffolk area went through a stretch of near-daily cold rain for more than a week. “Average day is like 60, 70 (degrees) right now.”
And she is also doing work with Ozobots — tiny robots that when turned on, for the purposes they are being used in Bermuda, follow a line to map coral.
“That’s along the lines of what we’re doing here at BIOS,” Hill said. “We’re taking all the sciences and math, the whole STEM component, and we’re combining them together to teach them what is BIOS really here for. We’re combining robotics, and what they are studying — corals and fish and plankton and things like that.”
When she returns from Bermuda, Hill, who used her own leave time for the trip and is being paid by BIOS for her work, will resume her duties at Nauticus, getting ready for summer camp and bringing back with her many lessons to use.
“I’ve realized that this is what I do back home,” Hill said. “It’s just STEM in a different place.”