Local names headed to the moon 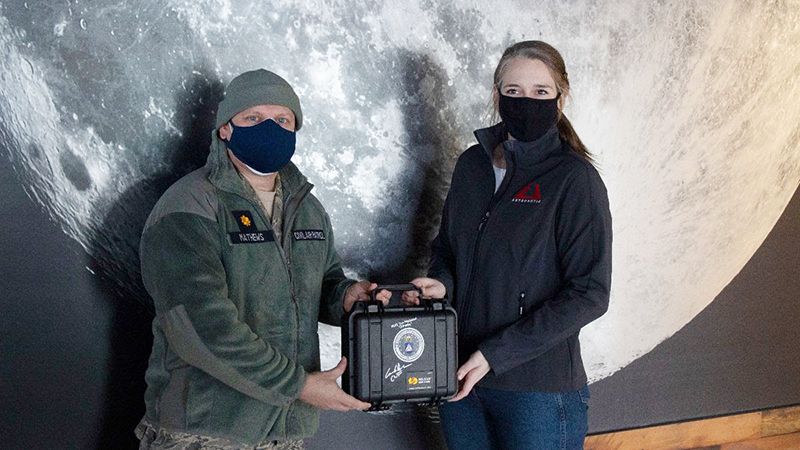 Some local names are headed to the moon through a partnership between Astrobotic, Civil Air Patrol and Cornell NanoScale Science and Technology Facility.

The groups created a microchip to send to the moon that holds names, messages and images. With a Civil Air Patrol base in Chesapeake, local names are on this chip from Western Tidewater, Franklin and Suffolk.

“We’re really excited about this,” said Lt. Col. Dennis Borgerding, group commander for Group 2 in Hampton Roads. “People are serving our country and helping where they can. It is neat they can get this recognition.”

CAP is an organization with adults and cadets ages 12 to 21 years old who have an opportunity to partake in aerospace education activities. It is also the official civilian auxiliary of the U.S. Air Force. With a focus on aerospace, many cadets have an interest in becoming astronauts one day.

“Cornell was putting this together and asked us if we wanted to be a part,” said Maj. Robin Haight, commander of the Tidewater Composite Squadron. “With many of our cadets wanting to be astronauts, it’s cool for them to know it’s up there, and they’ll want to go see it one day.”

According to a press release from Astrobotic, this microchip was made by the Cornell NanoScale Science and Technology Facility. The lab used deep ultraviolet lithography, along with other nanofabrication processes, to etch over 27,000 CAP member names, 270 Air Force Association StellarXplorers names, an 80th anniversary CAP logo and messages from CAP and AFA leadership onto the hexagonal chip that measures around the size of a postage stamp.

In late February 2021, Maj. James Mathews of Civil Air Patrol passed the chip to Astrobotic, a privately owned American company that makes space technology for the moon. Astrobotic will send this chip to the moon later this year inside a “MoonPod” and securely integrate it with its Peregrine lunar lander. This lander will be the first American spacecraft to land on the moon since the Apollo program around 50 years ago.

Not only will this chip carry local names, but it will also deliver a diverse set of other payloads from seven different countries, dozens of science teams and hundreds of individuals.

Haight was excited to participate in this project, as she remembers the moon landing when she was little and how regular space travel is becoming.

“To have something tangible on the moon that we are personally connected to is incredible,” said Haight. “I can speak for my squadron and say that’s why we did it. To be a part of this is truly amazing.”