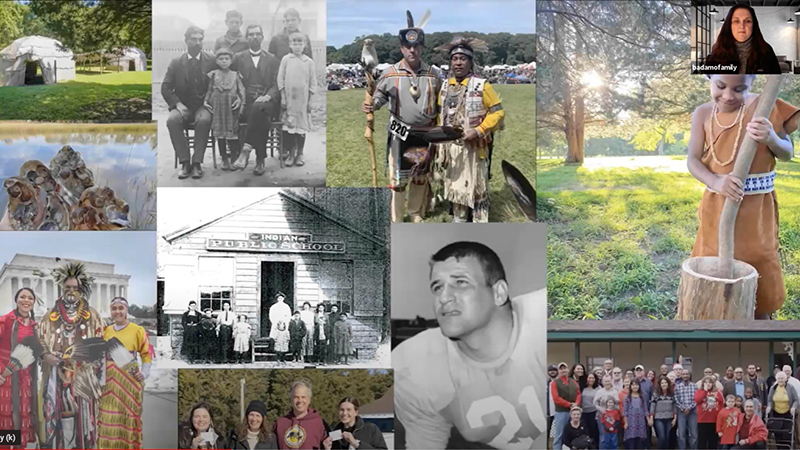 Aniella Badamo welcomes everyone to the first night of the virtual Firebird Festival with a welcome video. (submitted image)

The Nansemond Indian Nation held its annual Firebird Festival virtually due to the pandemic during the week of March 15.

The first Firebird Festival was held in March 2019. The event was a success as hundreds of folks came to learn more about the local tribe straight from the source. Unfortunately, the Nansemond Indian Nation had to cancel its second festival, as it was the start of the COVID-19 lockdown.

This year, the Nansemond Indian Nation wanted to keep the momentum that the first festival created after skipping the second year. Holding the festival in the early spring, they knew that it was unlikely that they would be able to have another in-person event. The tribe already held virtual tribal and council meetings, so they were familiar with this new format and decided to give it a try.

“The goal of the Firebird Festival is to share the history and culture with the community,” said Nikki Bass, a tribal councilwoman. “People have expressed interest in wanting to learn more, and it’s our intention to do that through hands-on engagement. I’m very happy we were able to continue even in virtual engagement.”

Over three nights, members of the tribe held classes over Zoom to educate participants on the history and culture of the Nansemond Indian Nation. During these presentations, they created slideshows and videos to keep the viewers engaged. The classes included archeology, language, hunting, cooking, environmental initiatives, pottery and contemporary art and community.

The three nights had a digital passport for participants to fill out, similar to those at the in-person festival. These pages were worksheets for kids, and adults, to fill out to practice what they learned in their Zoom presentations. They connected definitions of Algonquian words, colored the three sister plants, designed their own clay pots and much more.

Even though there were only a handful of classes instead of the multiple stations at the festival, folks who tuned in had plenty to learn and explore.

“In total, we had over 100 people, and several came back each night,” said Bass. “We are so excited about the participation. It was fun.”

According to Bass, the Nansemond Indian Nation decided to hold the Firebird Festival each spring for many reasons. With their powwows every August during the hottest time of the year, spring offers a time many want to be outside especially after being cooped up all winter. Spring is also a time of rebirth and renewal, which is symbolic of the tribe teaching the next generation.

Moving forward, the Nansemond Indian Nation has plans to keep some aspects virtual as many from out of town or older folks with limited mobility have been able to join meetings. The tribe is open to anyone who wants to know about their history and culture.

Bass hopes that next spring the Nansemond Indian Nation will be able to host another in-person Firebird Festival for the community to come out and enjoy.

“Keeping the hope,” she said.