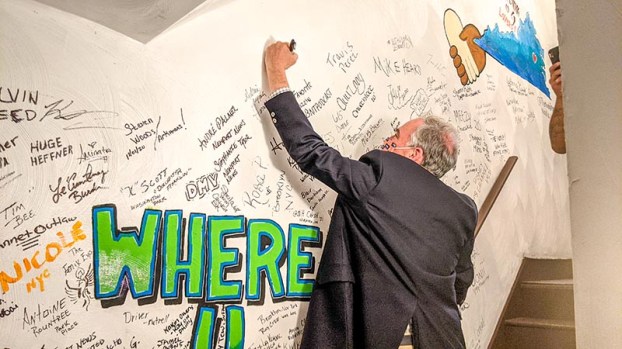 Sen. Tim Kaine signs the ‘Where U From?’ wall inside Wall St. Café April 5 during a visit with downtown Suffolk businesses. 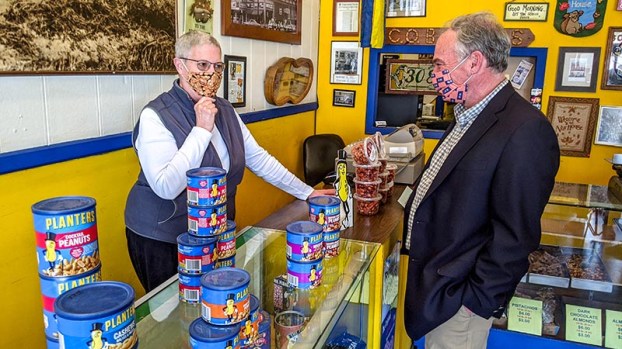 Sen. Tim Kaine visits Faye Beale of Planters Peanut Center on West Washington Street in Suffolk while he was in Suffolk April 5. 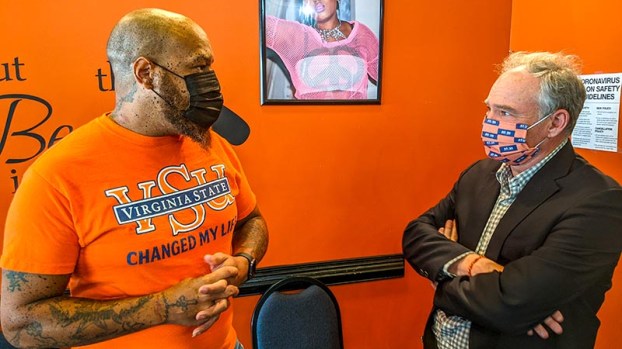 LaTroy Brinkley (left), owner of Serendipity Hair Salon, told Kaine how he and his business adjusted during the coronavirus pandemic, saying grants from the city helped him and other businesses when they opened back up. Kaine was on the first day of a six-day swing through communities along U.S. Route 58 to discuss the impacts of COVID-19 and the potential help to come from the COVID-19 relief package that passed Congress in December. 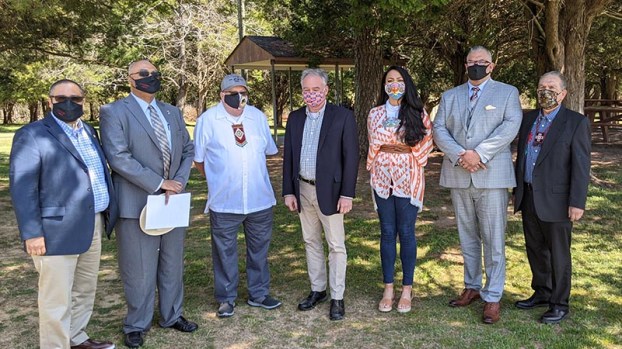 Sen. Tim Kaine met with members of the Nansemond Indian Nation while he was in Suffolk April 5. 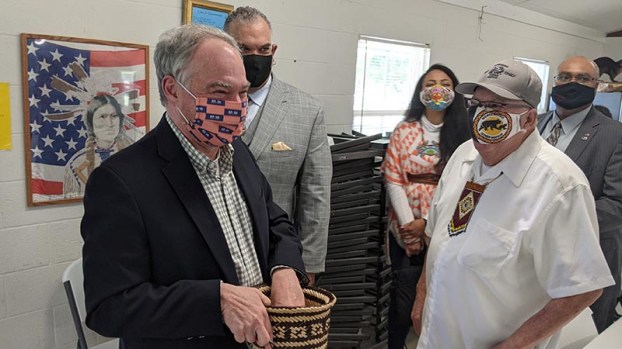 Unlike his weekend trip to the Great Dismal Swamp National Wildlife Refuge, Sen. Tim Kaine’s trip through Suffolk and Franklin Monday wasn’t for the birds.

It was a coincidence, he said, that he and his wife, Anne Holton, were in Suffolk last Friday having dinner at The Mod Olive and then spending Saturday birding, hiking and canoeing in the Great Dismal Swamp.

But it was no coincidence that Kaine spent the day visiting with the Nansemond Indian Nation and Suffolk and Franklin business owners. The senator is making his way east to west roughly along U.S. Route 58 to learn about the impact of COVID-19 on business owners, tribes and other officials, and the challenges they have, and continue, to face.

At Mattanock Town, Chief Earl Bass said the tribe has been hard-hit by COVID-19, which he estimated has impacted about 20% of its 407 people, including several who have died of the virus. While Bass said it has vaccinated 96 people, more need it.

“We need vaccines,” Bass said. “We’ve been working hard with the state and with Indian Health Service to try and get vaccines for our members. That’s our number one priority right now is to get everybody vaccinated that we can to stem the pandemic within our tribal community.”

Kaine told Nansemond Indian Nation leaders the latest stimulus bill would make the tribe eligible to receive about $6 million, which Bass said would go toward a community center.

Tribe leaders also asked him about tuition waivers for its members, creating a collaborative organization within the state to replace the former Virginia Indian Tribal Alliance for Life, whether North Carolina legislators would support the multistate National Heritage Area for the Great Dismal Swamp and finding a way to support the tribe’s long-term efforts through the American Rescue Plan Act of 2021 or through another means.

Outside The Mod Olive in downtown Suffolk, officials shared with Kaine how the city spent its CARES Act money, and business owners told him how they adjusted to the coronavirus pandemic. City officials also lauded efforts to get people vaccinated.

They noted how the city was able to pivot to help them and small businesses adjust in the wake of the pandemic, and it helped limit losses in tax revenue in the city.

LaTroy Brinkley, owner of Serendipity Hair Salon, told Kaine how he and his business adjusted.

“It was difficult at first when we shut down,” Brinkley said. “I had no idea what was happening, like most Americans. What really helped us pull through when we opened back up, the city had grants. … That was good. Rebuild Virginia, that helped out a lot, and the (Paycheck Protection Program) loan, that helped a lot as well. We’re picking back up slowly but surely.”

Brinkley suggested to Kaine that something be done to help business owners should there be another round of PPP funding for businesses. He said the equation in which businesses had to show at least a 25% reduction in gross receipts between comparable quarters in 2019 and 2020 was faulty in that for some, they lost money overlapping different quarters as business fluctuated.

At Wall Street Cafe, which opened last October, owners Domenick Epps and Danita Hayes talked of the challenges of opening during a pandemic. Hayes said city grants helped them renovate the downtown space. Epps said the business initially missed the grant application deadline for the first round of grants, but then a different business dropped out and Wall Street Cafe was able to get the money.

But the city money helped because as a new business, it did not qualify for the first round of PPP money.

Epps said that when it comes to business owners who aren’t used to applying for funding, there needs to be better communication, because many don’t realize stipulations of receiving grant money.

Hayes said the city worked well with them in getting their money and making the process “less strenuous.”

From there Kaine walked further down West Washington Street and dropped in on Doan Than and Suffolk Shoe Repair and Faye Beale at Planters Peanut Center.

“I tried to open every day because I need money,” Than told Kaine, “but I survived.”

Beale said despite her and her husband coming down with COVID-19, “we’ve managed to abide by the rules” and stay open. They said they’re old school people who don’t want to need assistance, “but that’s not always possible.”

At Serve Restaurant on Main Street downtown Franklin, owner Mike Smith said the restaurant had been open just three days when it shut down due to Gov. Ralph Northam’s stay-at-home orders.

The PPP, he said, got the business through “the worst of the worst.” He doesn’t expect to get anything in the second round of funding, but as long as COVID-19 subsides, he does expect his business to rebound.

Executive chef Nicolas Hagen said he lost many friends to COVID-19, but he is thankful for the city’s support for a new business.

“We just adapted from the get-go,” Hagen said.

“At the end of the day, I think everybody wants to make sure that our businesses are still here and we all return to normal,” Jarratt said. “We’ve been really successful and blessed with that.”

Jarratt told Kaine about its use of CARES Act money by helping the city’s health department with COVID-19 testing and vaccines, and used about $300,000 to provide business grants to city businesses.

Jarratt said the city is excited to be getting American Rescue Plan money and is looking at using the money on capital projects.

At The Cat’s Meow, owner Debbie Crowder said she networked with other boutique owners in Virginia and elsewhere to come up with survival strategies. But the business got critical support from its customers and she learned how to regroup.

“The community of Franklin and the surrounding communities, they were very concerned to make sure we stayed open,” Crowder said. “And the outpouring — March and April were dismal. In May, we started picking back up. But we can say the Christmas season, they were here with us and they’ve still been here with us. And they will come in and ask point-blank questions themselves. ‘How are you really doing? Don’t tell me you’re doing fine if you’re not. We’ve got to do what we can to keep you here.’”

Crowder hired a social media manager, Ashlee Wallace, and the business pivoted to marketing itself through Facebook and Instagram, and started its website. It had just got in spring and summer merchandise so the timing of the closure last year hurt, but it was able to open back up May 1.

Crowder got emotional in detailing how her business survived, crediting her staff and help from the city. Her business received money from an Economic Injury Disaster Loan, and it received some PPP money. It has not applied for the second round of PPP money because it is waiting on loan forgiveness. She spent six times as much on employees as her business received in PPP money.

Kaine said he would look into the loan forgiveness issue.

“I’ve felt the support. Initially, no one wanted you to really come inside of their houses,” Manley said. “But the phones are ringing now. I can feel it picking up.”

The statewide tour was something that Kaine wanted to do last year, but that’s when the state shut down and he and his wife came down with COVID-19. His weekend getaway before the start of his statewide tour was coincidental, but he noted the beauty of seeing more than 25 zebra swallowtails in the Great Dismal Swamp. Birdwatching is a hobby of Kaine’s wife. He prefers just spotting the birds — or in the case of the tour — issues that need attention.

“I really wanted to take this recess week to get around Virginia,” Kaine said, “and ask folks, ‘How’s it been? How have you survived? Have you been able to use programs like the PPP loan and other programs we did? What are the cities doing with the funds they received?’ … These (businesses) are just the heart of the American economy and it’s been the toughest year for them in my life. I’m 63. I’ve never seen anything like it. But hearing the stories about what worked and what could work better is going to be useful to me.”