Holland Road widening: ‘A long road ahead of us’ 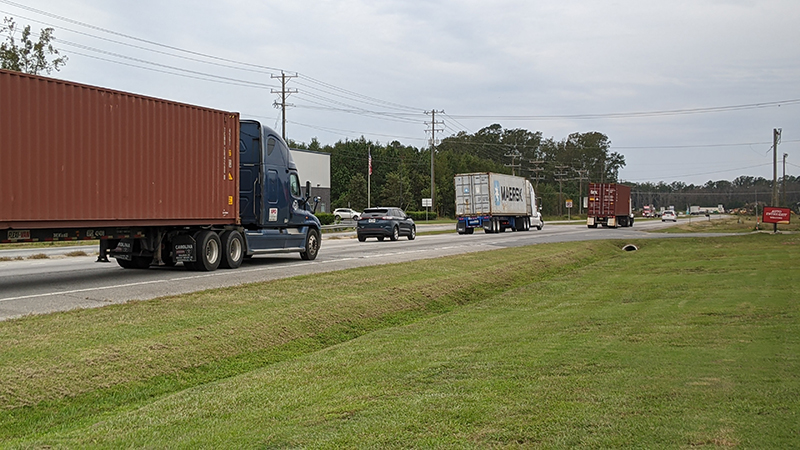 The $43.3 million, 3.1-mile Holland Road widening project has been more than 10 years in the making and will take about four years to complete. It is the largest capital improvement project the city has undertaken.

While the $43.3 million Holland Road widening project came in under bid, outgoing Public Works Director L.J. Hansen cautioned that much can still go wrong in a project that has been more than 10 years in the making, will take about four years to complete and is the largest such project undertaken in the city.

“This is easily the biggest capital improvement project the city of Suffolk has ever undertaken,” Hansen told City Council April 7, his last day before taking over as Public Works director for the city of Virginia Beach.

And it’s taking place in a corridor expecting and experiencing significant growth and development, with a proposed expansion of the Sadler Truck Plaza along with Massimo Zanetti Beverage USA’s new, 355,933-square-foot distribution center under construction in the 940-acre Virginia Port Logistics Park — formerly known as the CenterPoint Intermodal Center — to complement its corporate headquarters and main roasting operations in the city. The park is owned by Equus Capital Partners.

The Planning Commission also recommended last month a rezoning of 5.2 acres along Holland Road and the newly-created Enterprise Drive near the new distribution center to build a convenience store, gas station and a pair of drive-through restaurants. The property is currently zoned light industrial and, if approved, it would be rezoned for general commercial use. A signalized intersection is also planned for that location — “ultimately, the intersection that is there is three-to-four feet lower today than it will be at the final conclusion of the project,” Hansen said — and a future fire station has also been proposed.

There is also a utility pump station project going on simultaneously on this corridor.

“There are four projects that are at play here … a lot of construction workers on an already very busy, very crowded, very risky corridor,” Hansen said.

Police, he said, would be monitoring speeds in the corridor. The speed limit is 45 mph and there could be changes, but that, he said, would increase congestion, which causes other problems.

“The intent is to move traffic through the corridor, safely,” Hansen said.

Councilman Tim Johnson, who represents the project area, said there should be consideration for reducing the speed limit through that area during the project.

As part of the road widening project, an extra lane will be added both east and westbound from the U.S. Route 58/13/32 bypass to about 0.7 miles west of Manning Bridge Road, spanning 3.1 miles. Another project, the Manning Bridge Road/Route 58 intersection project, has been incorporated into this project and will be built as a single project.

The work includes intersection and traffic signal upgrades and safety improvements for cars getting on or off Route 58. It will include turn lanes, curb and gutters, raised medians, enhanced stormwater features and a path and sidewalk for walkers and cyclists.

Utility relocations should be complete around the project area within the next 30 to 60 days.

The construction estimate for the work underway had come in at nearly $44.8 million.

“I would say that our engineer did a very good job on the estimate,” Hansen said.

“While we came in under bid, $1.5 million on a project of this size can get consumed. … We are not exactly comfortable with the amount of window that we have available here. We have contingency monies built-in, we have some other funds that are in place.

“However, I would caution City Council that we have maxed out all of our funding sources from our state and federal agencies. We are under bid, we have done all that we can do at this point, but we do know that there’s still a long road ahead of us.”

Curtis Contracting had the winning bid and is the prime contractor, but will have a number of subcontractors and, as Hansen said, “sub-sub-contractors.”

Alpha Corp, which will be the project construction manager of the project on-site, making sure the city’s invoices are properly accounted for and that it is paying the right amounts and doing the things required to stay in compliance with the laws and requirements per the terms of the grants.

A.M.T. will be the construction inspectors. Hansen said for such a large-scale project, the city does not have enough inspectors to handle the project and do their day-to-day tasks.

The city has received the notice to proceed, equipment is onsite, and Hansen expects “a lot of activity” to begin in the next 30 days.

The project has been broken up into four phases. The first phase of six to nine months involves what Hansen terms “temporary” pavement — they will be in the roadway but not be finished lanes, initially — being put down on the north side of the road for two new westbound lanes of Route 58. Hansen said this would provide for two lanes of traffic both east and westbound.

Hansen said the goal is to maintain traffic flow even while construction is going on and allow businesses to continue their operations with as little disruption as possible and limit any lane closures or delays.

The third phase is expected to take about a year-and-a-half and shift all traffic to the south side of the median and build permanent improvements for westbound travel lanes. Hansen said that is when much of the curb and gutter work will take place before shifting traffic back to outside lanes in the appropriate direction and build permanent median improvements in the final, nine-month phase.

Hansen expects there to be community meetings at different stages of the project and regular communication through media, social media and briefs to council.

“It’s important that you know that we take this project very seriously,” Hansen said. “It’s a very large-scale project. It is a project that we feel adequately prepared for, we’ve been looking at this for a number of years, and we’ve partnered with good partners to make sure that we stay on track, keep the project moving, keep it on budget and do the things that we need to do to make sure that it’s a successful project.”