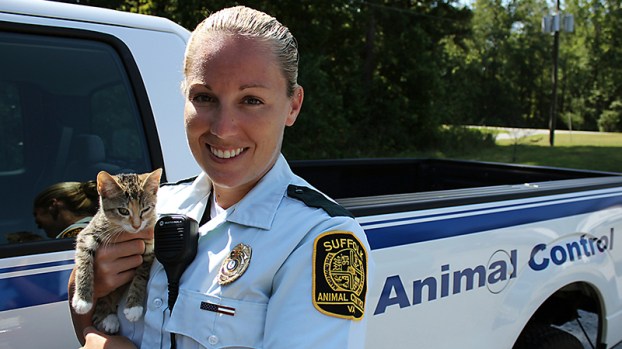 Chief Animal Control Officer Meghann McGillvray-Linear takes a “paws” for a photo with a kitten.

National Animal Care and Control Week is set for April 11-17. The week of appreciation is designed to give recognition to the hard-working men and women of animal care and control who risk their lives and devote huge amounts of personal time and resources while they serve the public.

During 2020, Animal Control Officers handled 7,243 calls for service. Also in 2020, Suffolk Animal Care took in 1,499 animals to include wildlife and companion animals. Of that number, 904 of them were considered friendly enough to be adoptable; 1,129 animals were adopted, redeemed, or placed with a rescue organization. Animal Control Officers utilized Facebook to provide public information on prevailing animal control issues, and members of the Suffolk Animal Care Center worked diligently to promote the adoption of animals and use different media outlets and private partnerships to accomplish this goal.

Holland Road widening: ‘A long road ahead of us’