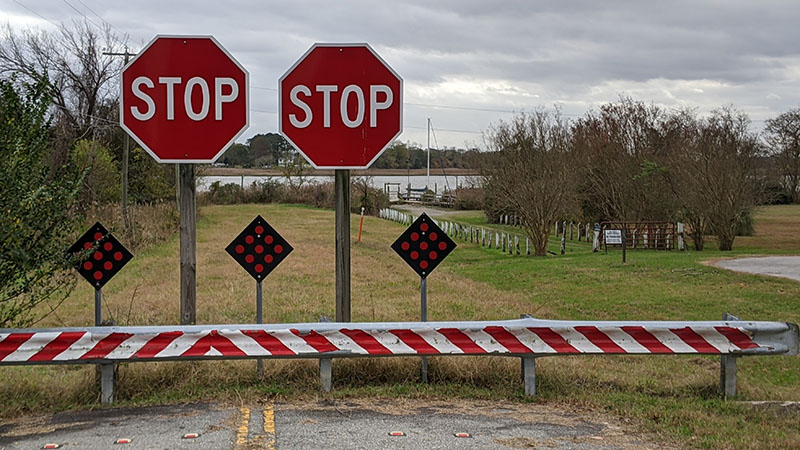 A near-majority of city residents surveyed about the Kings Highway Bridge favor its replacement over the same area where it once stood, but a number of questions remain, among them: Will it be built? How high will it be? And, will there be money to pay for it?

“Until we can answer some of those basic questions, we don’t believe that we’re going to be able to move this project forward,” said L.J. Hansen, then-public works director during an April 7 presentation to Suffolk City Council. Hansen has since moved on to be Virginia Beach’s public works director.

He noted that council had placed a new Kings Highway Bridge high on its 2020 legislative agenda. Then-City Manager Patrick Roberts and Hansen met with state Sens. Louise Lucas and John Cosgrove, who both represent parts of the city, about the bridge, as well as Virginia Department of Transportation secretary Shannon Valentine and state Transportation Secretary Stephen Brich in Richmond to discuss what it would take to get this bridge rebuilt.

Lucas and Cosgrove co-sponsored legislation to qualify the bridge for State of Good Repair funding. It would have also directed the Commonwealth Transportation Board, the city and General Assembly members representing parts of the city to work together to identify potential funding sources. However, the bill died in committee.

From a Smart Scale standpoint, Hansen said the bridge, which closed in 2005 because VDOT said it was unsafe, didn’t compete very well with other potential projects. He told council that it then looked to see if State of Good Repair money was available, but VDOT had said it was not eligible because the bridge did not exist. The city tried to argue that it did exist, Hansen said, but that it had started the construction process by tearing it down. It was not an argument VDOT bought, Hansen said.

It’s a transportation project unlike any others, Hansen said, in that if looking at an intersection or other road project, the city would apply for a competitive grant — typically Smart Scale. But because it doesn’t exist, it doesn’t score well, particularly when placed against other projects in the congested areas of Hampton Roads. VDOT also looks at how well a new bridge would score, but the Kings Highway Bridge, noted Hansen, is not a new bridge, either.

In the meeting with legislators, Hansen said the city asked for the bridge to be eligible for the State of Good Repair program, which provides money for structurally deficient bridges.

The city has used such money before on other projects, but has paired that with money from the city’s transportation funds and Capital Improvement Programs and Plan funding.

Those who supported the original location for a new Kings Highway Bridge cited that location, Hansen said, along with lower costs, direct access to Smithfield and Isle of Wight County, being a familiar route and also an alternative to U.S. Route 17.

Of those wanting a new bridge, nearly two-thirds wanted a 35-foot height versus a bridge at 65 feet.

Those favoring the other location, building it along Five Mile Road said it would address traffic at Chuckatuck and Route 10, would relieve traffic on U.S. Route 58 and Nansemond Parkway, would have less impact on existing residential areas, reduce traffic in both villages and would better be able to handle future traffic increases.

Those not wanting the project at all cited the potential for lower property values and using money for higher priority projects such as the Mills Godwin Bridge on Route 17 (Bridge Road), as well as concerns about damage to the environment and historic resources.

Hansen said informal feedback indicated that residents wanted to see a long-term plan whether or not the bridge is built, and wanted the Mills Godwin Bridge to be four lanes.

At this point, Hansen said it is up to council to make a decision, and it’s a decision VDOT awaits.

Councilman Roger Fawcett said it is imperative for the Mills Godwin Bridge to be expanded to help with traffic flow in North Suffolk from Harbour View to that span, which is two lanes. He said he is unsure whether the road going through Chuckatuck could handle much more growth.

Fawcett said if the bridge is rebuilt, that the first option to rebuild it where it was “kind of kills it” due to the traffic increases going back and forth between the city and Isle of Wight. The Five Mile Fork location would be better, he said.

“Down the road, whatever we decide, I would certainly look at Option 3 (no new bridge) very hard with the price tag being very expensive,” Fawcett said. “By the time you get the money, it’s going to be way more expensive because the cost is just escalating every time we make a move here on something. We may never see it at the rate we’re going unless we can get some legislative push behind it.”

Councilman Donald Goldberg said as much as he had supported the bridge previously, the Mills Godwin Bridge needs to be a higher priority.

Lue Ward said council should follow the will of residents who have spoken in favor of a new bridge. He said it is an opportunity for the city to do something big.

“Let’s see how we can get the money,” Ward said.

New Chuckatuck Borough Councilwoman Shelley Butler Barlow, having lived in that community for 25 years, said the Kings Highway corridor and the bridge were the ways to get back to Route 17 and Chesapeake. Now, she said, more people use Crittenden Road.

“The root of the problem is the traffic on 17,” Butler Barlow said. “So people are looking to get away from 17, and that’s dumping traffic into Crittenden Road and Chuckatuck. As much as I miss the bridge myself — it’s a longer drive around — I’d much prefer to put money towards alleviating the traffic problems on 17 that are horrible and maybe keep some of the traffic flow out of Chuckatuck as a village, because we don’t need a whole lot more.”

Councilman Tim Johnson said bridge and transportation projects need to be prioritized before chasing after money for them. He said he doesn’t see Kings Highway Bridge as being the highest priority.

Hansen said based on the recommendation council provides, VDOT would then take that and tell the city possible ways of paying for it, or a part of it, and its chances of doing so. He said if the city did get some kind of State of Good Repair funding, it could lead to some possible city funding that could then increase the project’s Smart Scale score and gain more money.

Mayor Mike Duman, who has lived in Chuckatuck for 43 years and represented that borough until this year, backed up Hansen’s point.