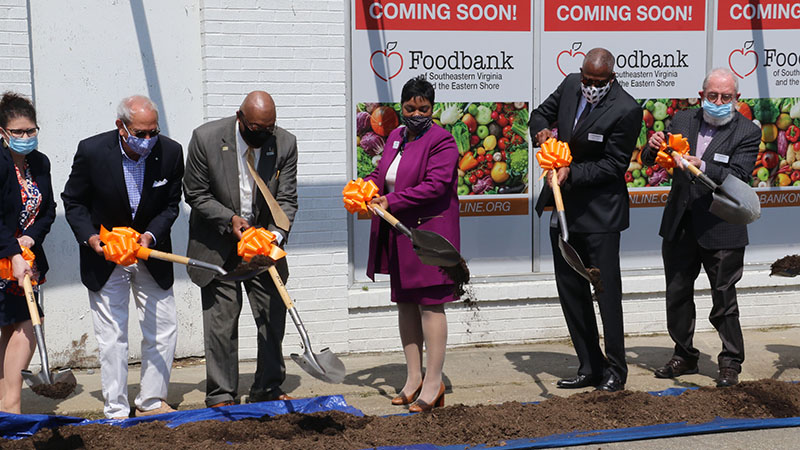 The Foodbank of Southeastern Virginia and the Eastern Shore hosted a groundbreaking ceremony for its new Western Tidewater Branch and Community Produce Hub in Franklin on April 14.

Currently operating out of Franklin’s Martin Luther King Jr. Community Center, the Western Tidewater Branch and Community Produce Hub for Foodbank will have a permanent home at 618 South St. in Franklin, where operations could begin as early as this fall. The branch and hub serve families facing food insecurity in Franklin, Isle of Wight County, Southampton County, Suffolk and Sussex.

Leaders with the Foodbank, the City of Franklin, First Baptist Church and Obici Healthcare Foundation attended Wednesday’s ceremony with community stakeholders and representatives from other partner agencies.

Some of the leaders first shared remarks at the Hayden Village Gymnasium before traveling with everyone else to 618 South St. for the groundbreaking ceremony and a brief tour of the building.

Multiple speakers credited the leadership of Dr. Ruth Jones Nichols, president and CEO of Foodbank of Southeastern Virginia and the Eastern Shore, for helping usher the project forward, keeping it on schedule even amid the COVID-19 pandemic.

“We expect the Community Produce Hub — to include the marketplace and the cafe — to be up and running by the fall,” she said. “We’re in the process now of selecting a general contractor who will begin their work within the next 30 days, ideally.

A Foodbank press release stated the permanent branch and hub will feature, in addition to the marketplace and cafe, a commercial/community kitchen that Jones Nichols said should be able to provide about 2,000 meals per day, conference rooms, offices and a warehouse/distribution center for partner agencies in Western Tidewater to access food conveniently. Classes and workshops will be held in the building to provide resources for addressing root causes of food insecurity.

Jones Nichols agreed that it has, in a sense, been a sprint to get the branch and hub to the point it is at right now, with the organization making particularly remarkable strides between the end of November 2020 and the end of December 2020.

“We accomplished in a 30-day period what most folks accomplish in six months,” she said. “So we didn’t just acquire the building in 30 days. We actually went through the process of having two environmental studies completed. We also had a hazmat study completed. We did our due diligence in terms of looking at what it would take to bring the building up to code.”

She said Foodbank knew when it created its new strategic plan in 2017 that it wanted to do more in the Western Tidewater community.

“When Obici Healthcare Foundation awarded our organization a $300,000 grant, we made the commitment then to establish a permanent presence by 2022,” she said. “So we’ve been right on target for meeting that goal even in the midst of the pandemic. The pandemic is obviously slowing things down a bit with contractors, getting equipment, getting things approved, but we know by March of 2022 this entire building will be fully operational.”

During her remarks, Jones Nichols said that within the past five years, the Foodbank has looked hard to identify where people are struggling with access to healthy, nutritious food the most.

Annette Beuchler, CEO of Obici Healthcare Foundation, said the new branch and hub were much needed.

“One of the things we learned several years ago when we did a health needs assessment was that food insecurity in our entire service area was about 19-20% of our population,” she said. “Then when you look at access to food, not just healthy food but access in general, it goes up to 30%. When you look in the City of Franklin, Southampton County itself, it’s 35%.

“And so this is definitely the right project and the right place and obviously with the right partners, because you guys have done quite an amazing job.”

Jones Nichols summarized what the realization of the new branch and hub is about.

“It is about a community that believes all people should have access to healthy, nutritious, affordable food and that at the end of the day, they shouldn’t have to make difficult decisions between putting food on their table or paying for basic household expenses,” she said. “So yes, we are going to be working to end hunger in this community by ensuring that every single person who is experiencing food insecurity will have access to the healthy nutritious food that they need. But we will also partner with community organizations that are designed and developed to address the root causes.”

These community organizations will focus on things like workforce development, higher education and housing.

“Because that’s one of the best ways you can experience freedom — when you have enough resources coming into your household to meet your basic needs,” Jones Nichols said.

She noted the branch and hub and its partners will also address institutional challenges while ensuring that all of the work brings people together as opposed to separating people based on differences.

Franklin Ward 4 Councilman Linwood Johnson, who was part of the new branch and hub project from the start, described Wednesday’s ceremony as a monumental occasion.

“We’re all excited because we’re all a part of this partnership, developing success, making history together,” he said. “It will be one of the greatest things that has happened in the city for our citizens.”

He described the process that led to the groundbreaking, first recalling how he expressed to Jones Nichols the community’s need for a food hub. Out of those discussions came the writing of the grant from Obici Healthcare Foundation.

“And then from there, we looked for a building,” he said, noting the perfect building became the one at 618 South St. that belonged to First Baptist Church.

Alfreda Talton-Harris spoke Wednesday not as a retired judge from the Virginia 5th Judicial District but as a member of First Baptist.

She briefly shared the history of First Baptist.

“The legacy of First Baptist Church is not limited to a church building built by slaves with a vision of God,” she said. “It’s also included a commitment to education, to expanding ministries and a commitment to community outreach.”

She said the church calls the building The Experience Center, a place where people can experience freedom to maximize their God-given potential.

“The new facility will provide 17,320 square feet of freedom and space for community and family life development,” she said. “The newly renovated space will provide after-school tutorials, senior citizen enrichment, administration, fellowship and more. The building is about transformation of a space to enable ministry to fulfill its vision and mission.

“The vision is not to transform a building, but the vision is to transform lives,” she said. “So when we were approached, we weren’t looking to get rid of our baby. Dr. Ruth Jones Nichols and the infinite God apparently had another plan.”

She noted that part of what it took for the church to let the building go was an understanding that the assembly could achieve its vision of transforming lives through the food bank.

“We knew it was the right thing to do,” she said.

Kevin X. Jones, board chair of Foodbank of Southeastern Virginia and the Eastern Shore, encouraged Talton-Harris after she had concluded her comments.

“I can tell you from the depths of everything I know about Team Foodbank, you’re going to realize that vision and that dream,” he said. “We’re going to continue to transform lives in the work that we’re doing. This building is not only going to allow us to feed people, but it’s going to allow us to get to the root causes of hunger and address those things head on.”

Valjean Bynum, a Franklin resident, spoke briefly at Wednesday’s ceremony giving testimony to how she has benefited from the Foodbank program.

“My experience with the food hub and the pantry here have been very beneficial for me and my family,” she said. “I am able to actually shop and make my own choices of the foods that I prefer to have, and that’s awesome. The staff members are very friendly. They greet you with a smile, and they actually make me feel like family, and they treat you the same way through the whole process of your shopping.”