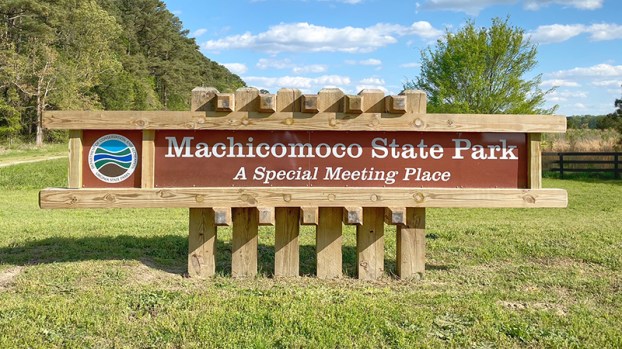 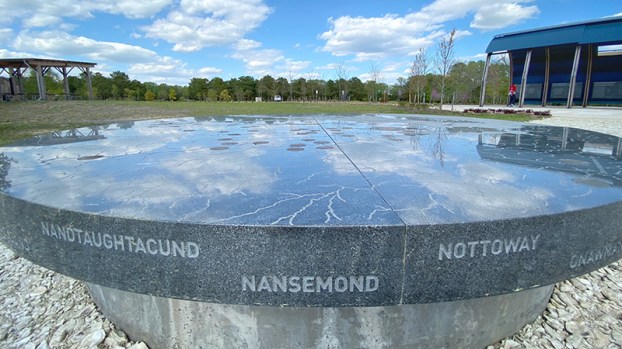 Machicomoco State Park opened in Gloucester County on April 16 with a special ceremony for invited guests. Virginia Indian tribes, including the Nansemond tribe, were honored and will be forever remembered at the park, the name of which means “special meeting place.” (Courtesy of Nikki Bass) 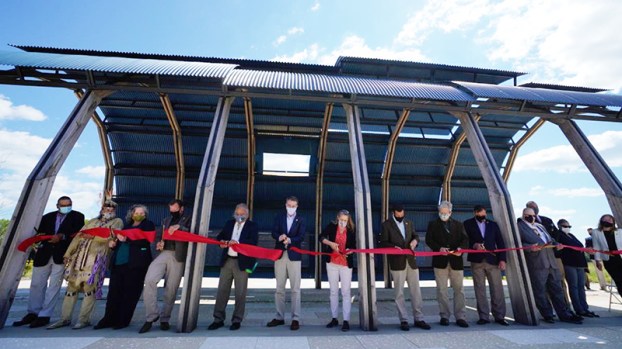 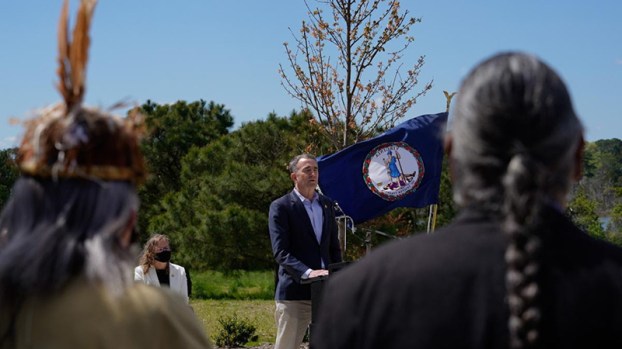 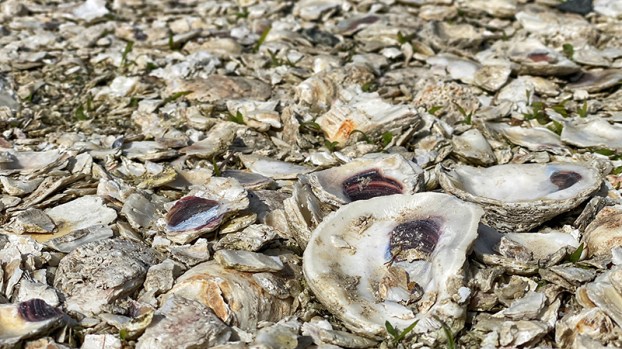 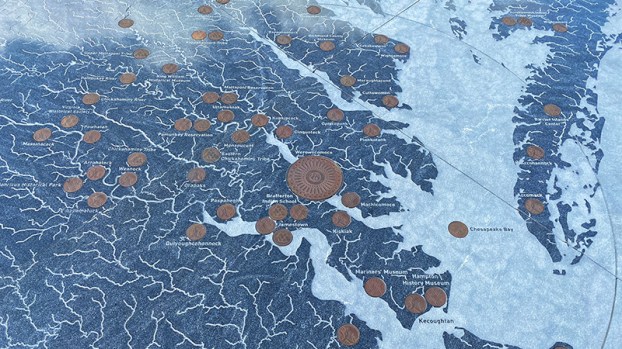 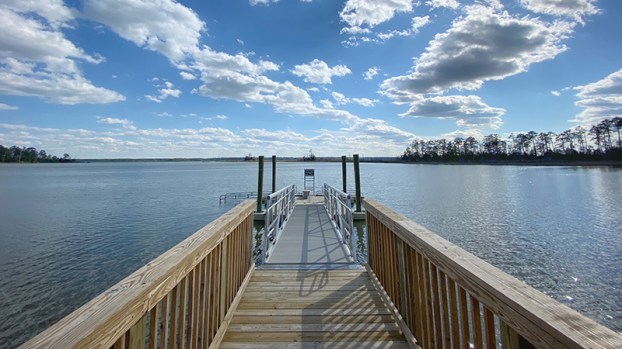 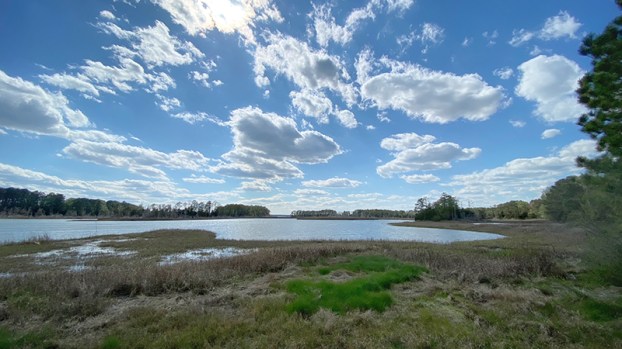 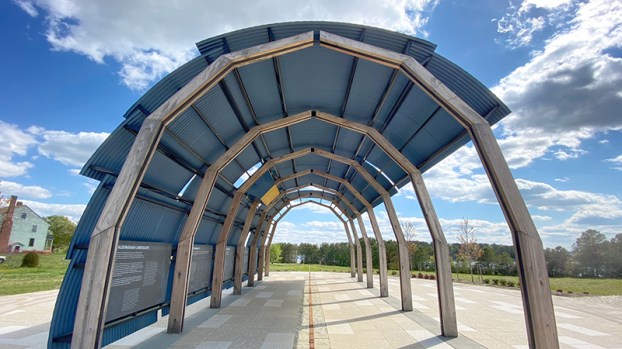 Machicomoco is an Algonquian word meaning “special meeting place,” acknowledging the importance and mission of the site: to educate the public about the native tribes in Virginia and share their stories. Machicomoco State Park spans 643 acres along the York River in Gloucester County at the site formerly known as Timberneck Farm.

“As we open Virginia’s 40th state park, we are reminded of the many ways these natural spaces connect us and bring communities together,” said Governor Northam. “The story of our Commonwealth cannot be told without the history and experiences of Virginia’s native tribes. Machicomoco will stand in perpetuity, ensuring that we continue to learn from our past, celebrate the present, and aspire to a better future, one that celebrates the heritage of our Commonwealth and all its people.”

An interpretive area developed in close partnership with Virginia’s Indian tribes highlights the history of the Virginia Indians with a timeline walk and an educational trail. An open-air structure featuring panels about life, land, community, and travel will be the site of future interpretive programs. The natural resources, including local flora and fauna important to Virginia Indian culture and the Chesapeake Bay, are also interpreted alongside relevant subjects like tidal ecology and wetland preservation. The prestigious firm Nelson Byrd Woltz Landscape Architects coordinated design and interpretive work for the park in coordination with Virginia’s Indian tribes.

“One of the main objectives of the park is to tell the Virginia Indians’ story,” said Chickahominy Tribe Chief Steve Adkins. “It is an opportunity we look forward to as tribal members, because, too often, we haven’t had a voice in telling our own history.”

To Virginia Algonquian speakers, eastern Virginia is known as Tsenacomacoh with Werowocomoco as its capital. Over 30 tribes comprised the Algonquian Powhatan Confederacy at its height, an organization linked by the eastern-Algonquian language and united under Chief Wahunsenacawh.

“The protection of our lands and waters goes hand-in-hand with the protection of native landscapes,” said Secretary of Natural Resources Matthew J. Strickler. “In dedicating this property, we are committing to conservation practices that will restore native ecosystems while providing opportunities for nature and wildlife to thrive in Virginia’s 40th state park.”

“The creation of Machicomoco State Park not only preserves this beautiful land and viewshed of the York River, but gives us a significant place to preserve and share tribal history and culture with all Virginians,” said Secretary of the Commonwealth Kelly Thomasson, the Governor’s liaison with Virginia’s Indian tribes. “Learning this history and celebrating the culture and heritage of Virginia’s native people is another step towards historic justice.”

The project also contributes to Virginia’s ConserveVirginia land conservation strategy. The property was acquired by The Conservation Fund, a national nonprofit organization dedicated to protecting environmentally and economically significant natural spaces in 2017 and transferred to the Commonwealth in 2020 through a mitigation settlement from the Surry-Skiffes Creek Transmission Line project on the James River.

“Identifying and prioritizing land conservation that honors and celebrates the cultural heritage of the local, native tribes is so important because too many natural places like this have been lost to development,” said Heather Richards, Mid-Atlantic Regional Director with The Conservation Fund. “We’re privileged to help to secure the site for Machicomoco State Park, which will be a new recreational and educational asset for Gloucester County and visitors for generations to come.”

A memorandum of agreement among the Army Corps of Engineers, the Commonwealth, and Dominion Energy provided funding for land acquisition, visitor interpretation facilities, archeological investigation, and preservation associated with Werowocomoco. Werowocomoco, the political headquarters of Chief Powhatan, is located just 10 miles upriver and is a National Park Service site.

“We’re thankful to the many tribal members who provided input on how their story should be told. Those contributions are reflected in the park’s themes, layout and interpretive signage,” said Clyde Cristman, director of the Virginia Department of Conservation and Recreation. “The agency is proud to carry the stories and histories of the Virginia Indians forward.”

“Machicomoco is a place where many will go to meditate, exercise, and recharge from the stresses of the day,” said Virginia State Parks Director Dr. Melissa Baker. “Visitors will experience a connection to the natural and cultural resources of the land along with the important interpretation of its history. The park will serve so many wonderful purposes, and I look forward to hearing stories from visitors for many years to come.”

Terry Sims was selected to be the first park manager at Machicomoco following a nationwide search. He joins Virginia State Parks after seven years with Texas State Parks.

The park includes a campground with both modern and primitive campsites as well as three yurts. Recreational opportunities include an Americans with Disabilities Act-compliant car-top boat launch that allows guests to explore the Poplar Creek tidal ecology and provides access to the York River by paddle craft. Three miles of a paved trail that parallels the main road will be available for immediate use. Additional trails will be considered and added in the future.