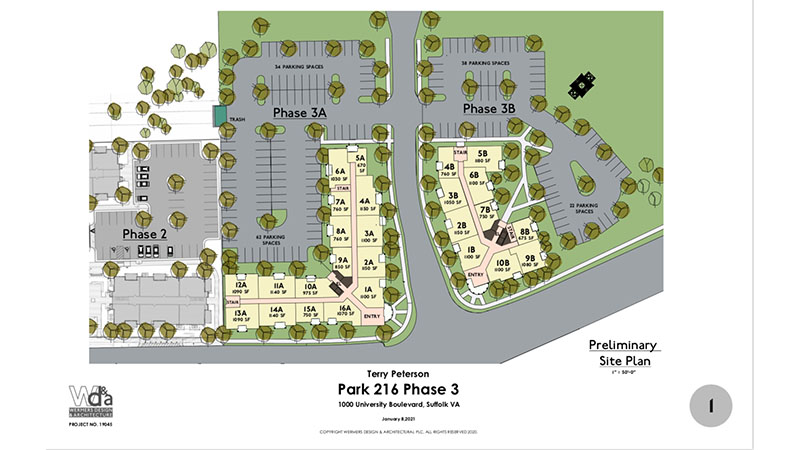 A site plan for the age-restricted apartments. (Submitted Image)

More than 100 age-restricted apartments have been proposed for University Boulevard as part of the Hampton Roads Crossing development in North Suffolk.

“I hate to keep using the word rezoning, because the zoning is (mixed-use development). We’re not changing the underlying zoning,” said Tuck Bowie with Terry-Peterson Investment Thirty, the applicant and owner of the property, during a Planning Commission public hearing April 20. “We’re making amendments to the original MUD. And some of the progress that we’ve made, we’ve come back over the last 15 years to make a number of changes to meet the demands of the changing market.”

The property for the age-restricted apartments was originally to be for commercial use. However, the applicant and owner of the property, Terry-Peterson Investment Thirty, stated that despite being located near College Drive and near other retail establishments and offices, they could not get interest, and with the office market having changed, they said it was not marketable for office tenants. The site, according to the applicant, is also too small for hospitality uses.

“For two years, we have tried to market this property to a number of different users,” Bowie said. “Commercial users, retail users, we even looked at doing a combination (of) retail and with units over the top of the retail. Unfortunately, with a pandemic we’re going through, with the impacts that that’s had on the office market and the retail market, and with all the other retail and office that we had, we couldn’t find a user.”

However, it said that while Hampton Roads Crossing offers residential options, they are limited for those ages 55 and up, and there is a “significant demand” for luxury apartments in that age range.

There would be 104 luxury-style apartments in two separate buildings on either side of Beringer Road, and only for those ages 55 and up. No one under 18 will be allowed to live there.

According to the staff report for the project, the design standards for the building will be complementary to the existing Park 216 apartment buildings in material and style.

The last 50 of those apartments have just finished being built, and Bowie said all 266 units are leased, and there’s a waiting list to get one.

While the new age-restricted apartments would come with its own amenities, Bowie said they would also be able to share the amenities provided to residents of Park 216.

City planning staff recommended approval of the rezoning, and the Planning Commission voted 8-0 in favor of rezoning.