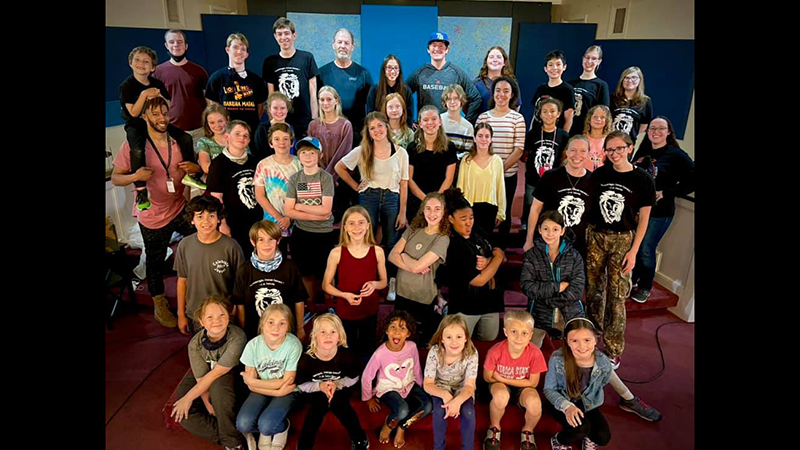 Despite the hurdles the pandemic has thrown at this theater class, the show will go on.

“This has been an adventure, and I don’t think any of us regret it,” said Carrie Rubinow, director and producer of this production. “I’m so proud of the families and kids for all their hard work to make this happen. I’m just so thankful to do this.”

The Homeschool Plus co-op is based in Norfolk and had a hard time finding somewhere to hold their play due to COVID-19 gathering restrictions. Many universities and churches wanted to help but had to turn them down, as the current 30% gathering limit wouldn’t allow the 50-person cast. Parents and volunteers helping with the production even called Gov. Northam in hopes that with the vaccines rolling out and cases going down, he could help their performance by raising gathering to 50% capacity. Fortunately, he must have heard them, as five days before opening night, the gathering limits will increase to 50%.

After the group searched since September, Hub 757 said yes in April to let the theater group use its large venue that can accommodate the production. The new hurdle created was the price, even after Hub 757 gave them discounts. The parents stepped up to fundraise. Sponsors can donate to receive different packages for the show, including complimentary tickets and advertisements in the printed playbill. With Homeschool Plus not based in Suffolk, they wanted to make sure Suffolk businesses had a chance to advertise, and the community could come out to be a part.

“We are just so thankful to Hub 757 for opening their doors to us,” said Rubinow. “We want to let Suffolk know what is going on. Hub 757 and Suffolk took a chance on us, and we are so grateful.”

Despite this play being performed by a theater class of mostly students ages 5 to 18 years old, the quality has not been compromised. The students went through an auditioning process with callbacks to get a part in the show. So many of the students showed talent that some of the lead parts have two actors cast who will perform on different nights. Parents and community members are also included in the cast, meaning Father Christmas and Professor Digory Kirke will be played by adults.

Volunteers have stepped in to make sure this performance is top quality. Giving their expertise are a combat choreographer, costume designer, voice coach and other experienced professionals who are stepping in to create a memorable experience for the cast and audience.

“These experts were just so hungry to do this that they volunteered to help,” said Rubinow.

One reason this play is so important is to help with the kids’ mental health. Rubinow’s husband is a mental health professional and has seen the toll that this pandemic and isolation have taken on young people.

“The mental health of young people has been a serious struggle,” said Rubinow. “Theater and the arts have helped tremendously, and we are seeing the fruit of that.”

Tickets are on sale now, and sponsors have until May 10 to secure a spot in the playbill and can contact HSPNarnia@gmail.com. To buy tickets, donate or learn more, visit hspnarnia.com.