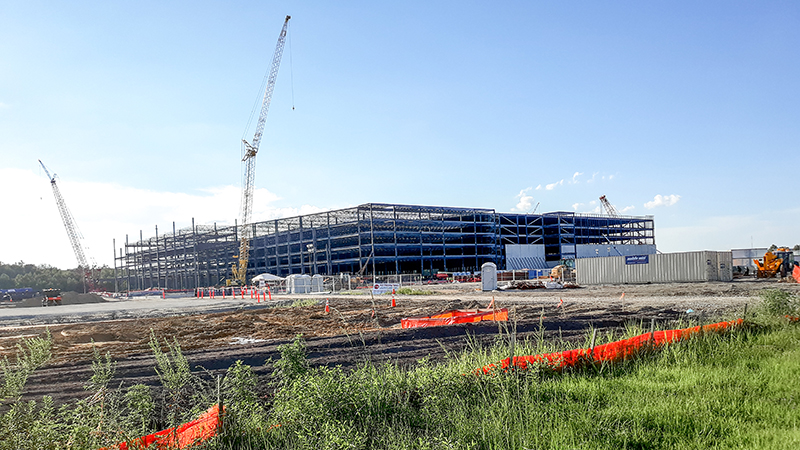 Two men died in an industrial accident on Aug. 29 at the new Amazon robotics fulfillment center in Northgate Commerce Park. A subcontractor has been fined in relation to the accident. (file photo)

A subcontractor doing work on the new Amazon robotics fulfillment center in the Northgate Commerce Park in Suffolk has been hit with a $170,500 fine following the death of two of its workers following a collapse last year.

The Occupational Safety and Health Administration fined Louisiana-based Eastern Constructors Inc., a subcontractor for The Conlan Company on the project, and cited them for 12 violations in February — 11 categorized as serious and another as willful., meaning “a violation in which the employer either knowingly failed to comply with a legal requirement (purposeful disregard) or acted with plain indifference to employee safety.” OSHA defines a serious violation as one in which “the workplace hazard could cause an accident or illness that would most likely result in death or serious physical harm, unless the employer did not know or could not have known of the violation.”

As the crane lifted the steel beam into position, the structure collapsed, with the falling materials striking the aerial lifts with Serrano and Cuevas-Macias in them, according to the report, causing them to fall about 54 feet. They “were killed by blunt force trauma to their entire bodies.”

Eastern Constructors did not immediately respond to a request for comment, but according to OSHA, it is contesting the violations.

The building, when finished, will be the largest industrial building in Virginia and the second-largest building in the state overall, second only to the Pentagon.

Site plans for the Amazon facility were approved in December 2019 and The Conlan Company received a building permit from the city on March 5, 2020.

The new facility is expected to open later this year and will have about 1,000 full-time employees.